The online job boards are always full of available positions, the pay is good, and the benefits include cheap healthcare and a year-end bonus. Usually, the only qualification needed is a bachelor’s degree in anything. A year out of college, I took one of those jobs posted online and moved across the world to the small city of Donghae-si.

Based on every article and blog post I’d read about teaching in Korea, I expected it to be a great adventure in which I’d make lifelong friends, gain valuable teaching experience, and fall in love with Korean culture.

It didn’t turn out that way.

I wish I’d come across more accounts of teachers who had struggled in Korea before I signed my contract. If I had, I might have been more prepared to face challenges as they arose. Here’s what I wish I’d known before teaching in Korea. 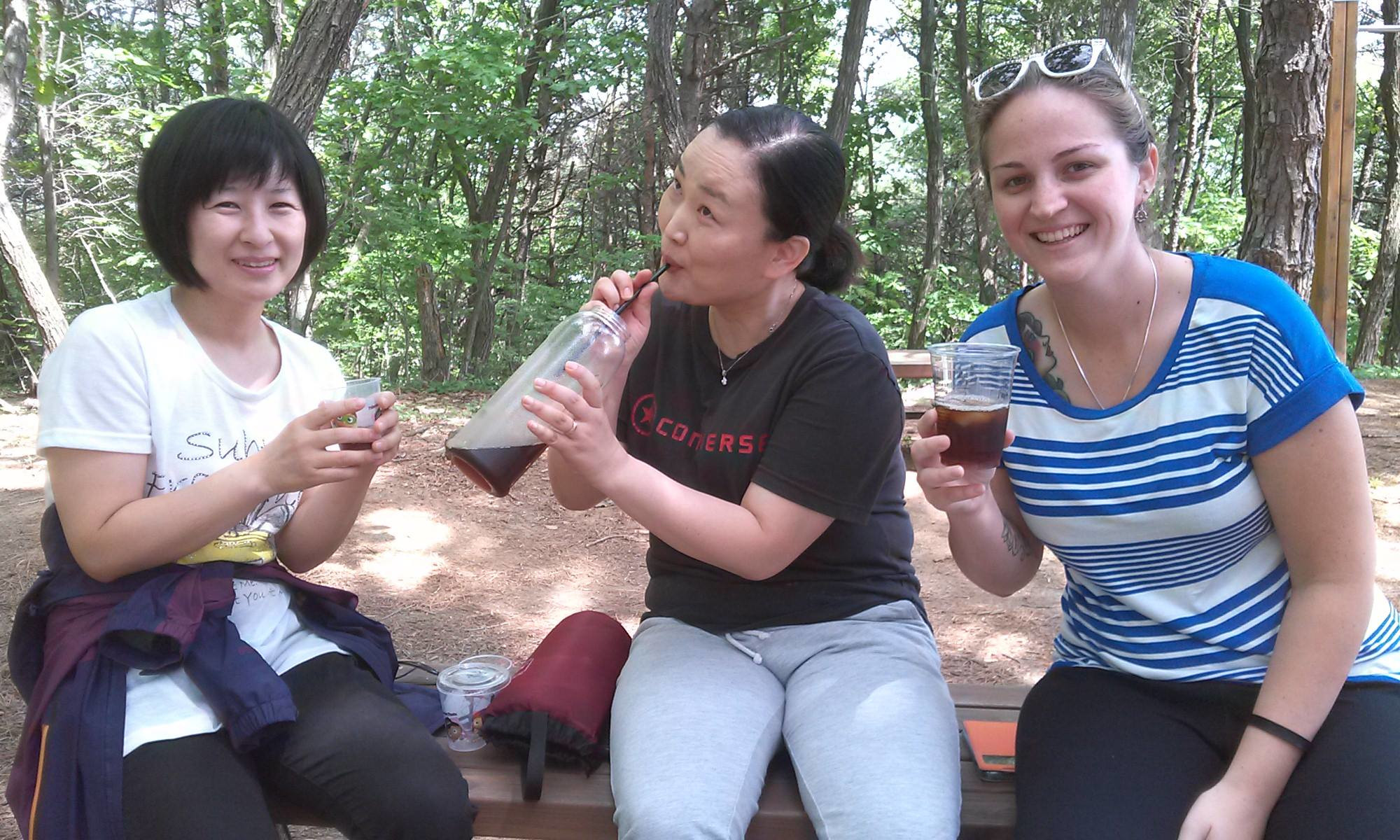 One of many photos of me in Korea where I clearly have no idea what’s going on.

Solo travel can be isolating.

Living in a small city meant that I was one of a dozen native English speakers in the area, at most. During the first two months of my contract, I didn’t interact with a single native English speaker or any non-Korean people. While immersion can be a great learning experience, diving into a radically different culture is exhausting and often frustrating, and I desperately needed to talk to someone who understood the daily challenges. I could Skype friends and family back home and tell them (sometimes through ugly, snotty tears) how complicated setting up a bank account had been, but they couldn’t possibly understand.

In my desperation, I followed the first man I heard speaking English over the phone as he casually walked down the street. Once he hung up, I grabbed him, took him to dinner, and begged him to call the other English speakers in town so I could meet them too. Once I had a few friends, things became easier, but the feeling of isolation never totally left. 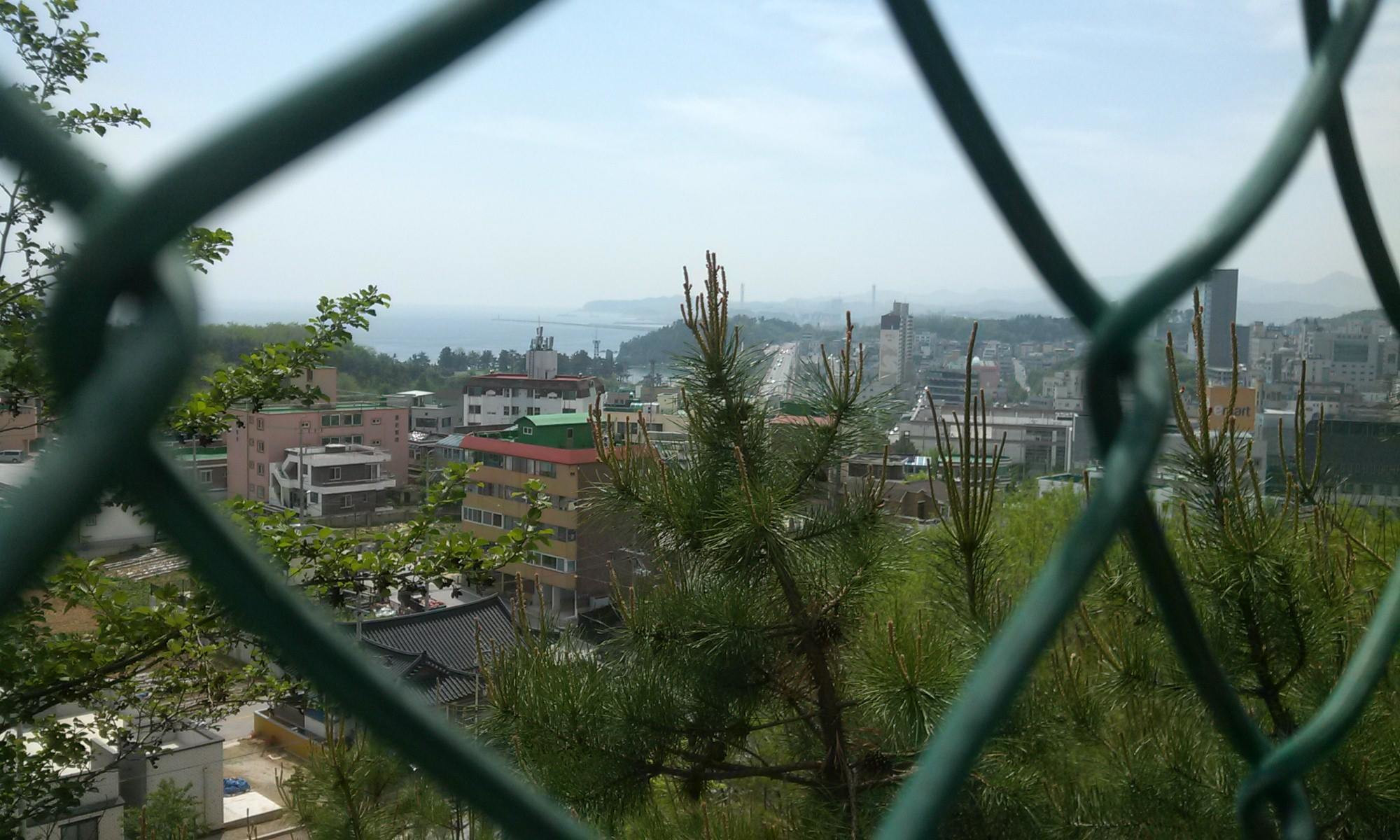 The teaching style won’t be what you’re used to.

The American education system is by no means perfect, but the teaching style employed by my Korean school felt like something out of the dark ages. My boss expected me to teach from a pre-made PowerPoint and go through a corresponding workbook from cover to cover. My supervisor highly discouraged any variation on this strict lesson plan. It felt like I wasn’t teaching my students to speak English, but to mimic English sounds for a strange, well-rehearsed play.

Before I was interviewed for my position, the school asked for a few photographs of my face. They wanted to know what I looked like—that didn’t feel strange, but once I arrived, I was shocked to see these photos again, this time on a 4×6 foot banner strung from the school building. Apparently, another poster said I’d graduated from Columbia University (I had not).

Having a native English speaker was a point of pride for the school, so they brought me out at any opportunity. I began to feel like a prized pony—walk over here, say something in English, be strange and foreign. It wasn’t uncommon for prospective new parents to pet my arm hair or touch my face during these “meetings.” 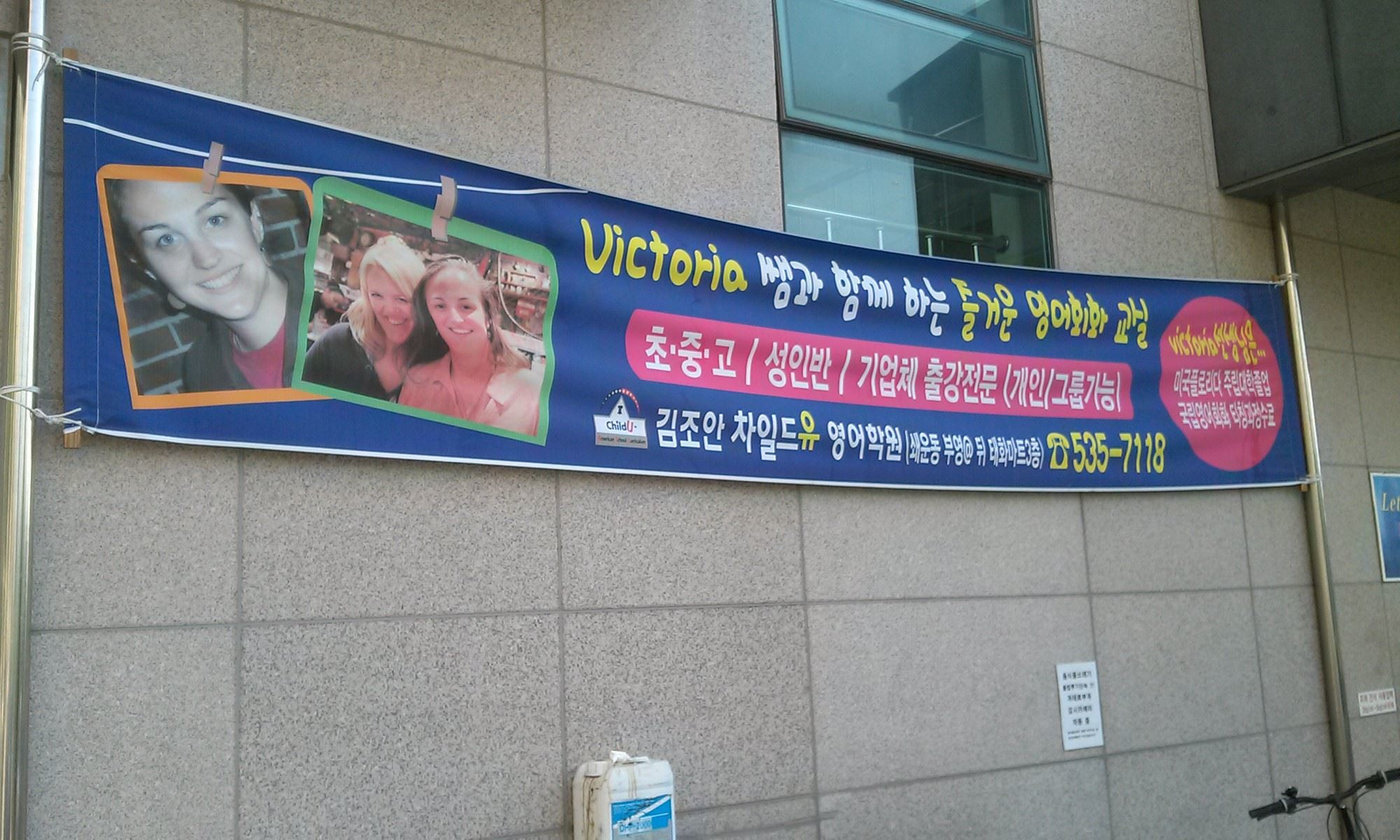 Not all Hagwons are made equal.

I taught at one of the many private English schools in Korea known as “hagwons.” Some of these schools are amazing and make it possible for students to learn real conversational English. I have friends who’ve taught at the same hagwon for years and love it. My hagwon was not so great.

Getting paid in full and on time became a monthly issue. My boss invented excuses to explain the problem like “my internet shut off halfway through transferring your money, so that’s why you only got half of your paycheck.” This frustrating trend culminated into a major problem at the end of my contract.

On my last day, my supervisor informed me that our boss didn’t intend to pay my year-end bonus and hadn’t contributed to my pension, which should have given me another 2.3 million won. In short, the woman tried to cheat me out of about 4,500 American dollars because she knew I couldn’t manage the Korean legal system by myself and that I already had a flight home booked.

Luckily, a Korean friend who’d gone to college in the States spent the next three days fighting and threating to expose my boss. The money arrived just hours before my plane took off, but the experience didn’t leave me with warm fuzzy feelings about South Korea. 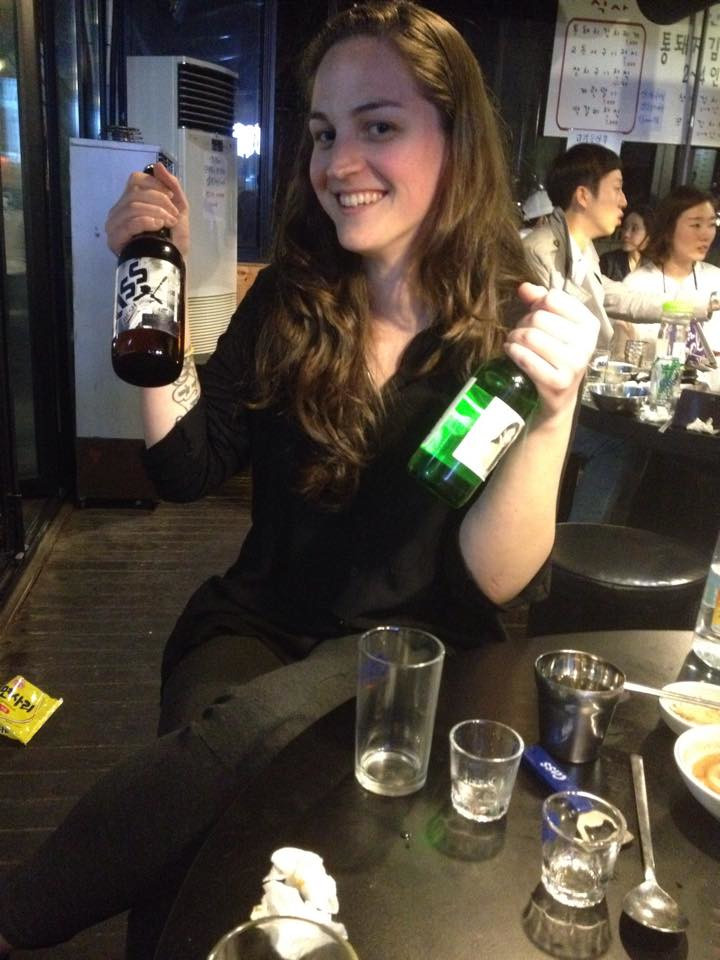 In Seoul, celebrating my last night in Korea.

This one might not immediately feel like a big deal, but I don’t like kimchi and in Korea, that’s kind of a big deal. Over the course of a year, I honestly feel like I gave the fermented cabbage dish ubiquitous in every Korean meal a fair chance. I tried to develop a taste for it, appreciate its flavor, understand its cultural significance, but I could not make myself like it. Eventually, I came to a place where I didn’t mind a tiny portion of it hidden in a tuna kimbap roll. In some ways, my relationship with kimchi reflected my relationship with South Korea—it just wasn’t for me. 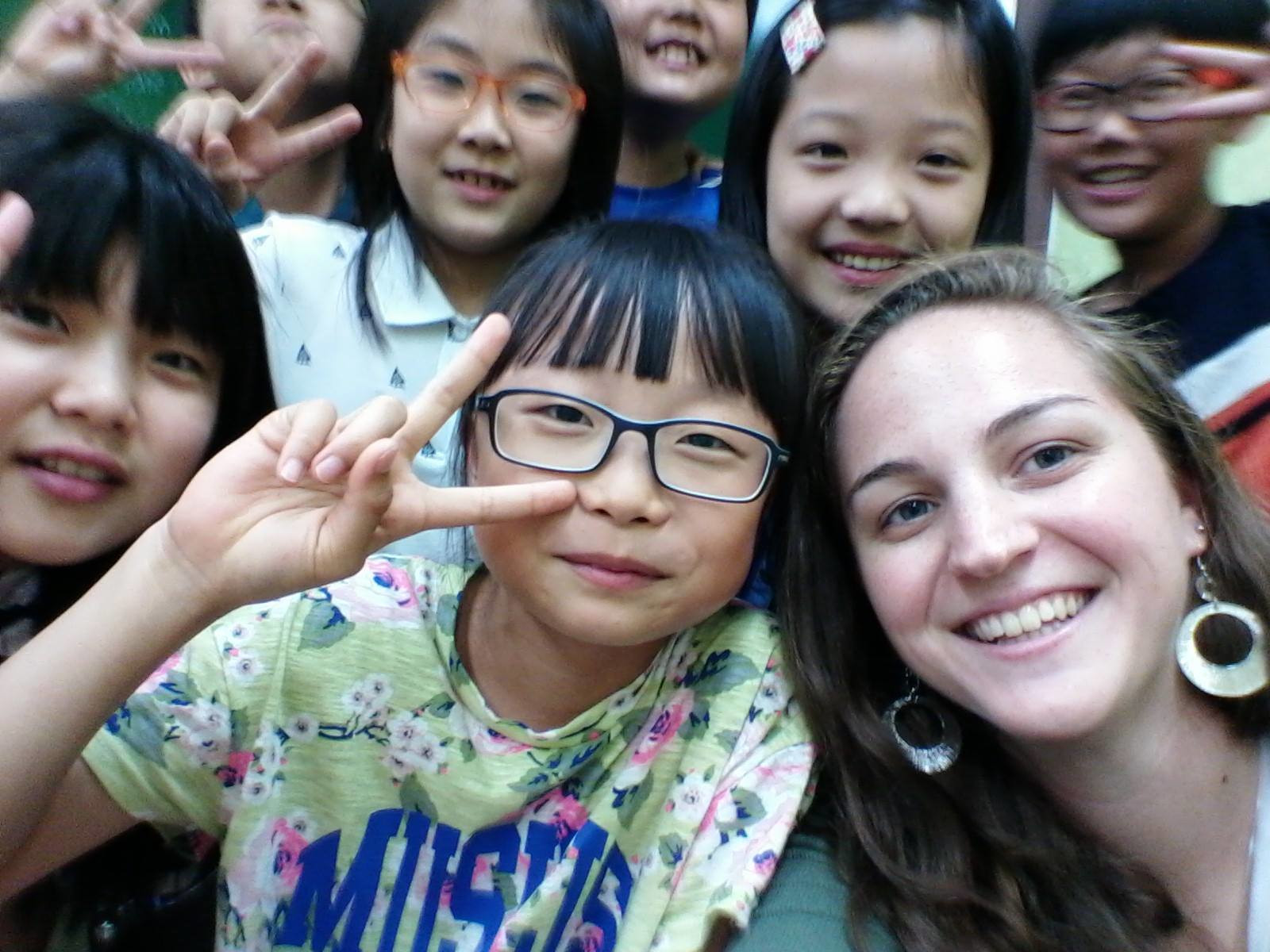 Korea wasn’t for me, but it wasn’t all bad.

In retrospect, I’ve come to understand that many of the issues I dealt with in Korea could have been avoided. I could have applied to teach at a public school where the money issues I came across are unheard of, or I could have picked a hagwon in a bigger city with more international people.

If I’d done more research, I might have even realized that my previous experience living abroad in Europe was not sufficient training to prepare me for a headfirst dive into Korean culture.

I made mistakes, but I’m still not itching to return, and I still don’t rank that year as one of the best in my life.

Not everyone connects with every culture and that’s OK.

When you move to another country, expect that you’ll still have daily annoyances and everyday chores just like you did at home. Things that initially seem strange and exotic will start to feel commonplace—when you notice that happening, try to give yourself credit for adapting.

It took time, but now I look back on my time in Donghae and think—I had a favorite Gamjatang 감자탕 place, my friends knew that if left up to me, we’d all be eating pork bone soup on the far side of town—that’s pretty cool.

And now, when I feel overwhelmed by a new, complex task, I remind myself that at one point in my life, I knew how to confidently navigate a public bus system in a language I didn’t know and an alphabet I couldn’t read.

For that confidence, I’m thankful.