A Beginner’s Guide to Hitchhiking Internationally

There’s a certain freedom that comes from standing on the side of the road in an unfamiliar land with your thumb out, waiting for a ride from a stranger. That one lifted finger universally signals that you’ve embarked on a journey that’s consciously open to a brush with fate. With it, you welcome anyone who happens to be going in the same direction to join in your adventure and share in the rush of a unique encounter.

For one thing, hitchhiking is cheap. Catching a ride with someone going in the same direction costs you nothing. It’s also a great way to get in some conversational practice in a new language and learn about a different culture if you’re hitchhiking internationally, not to mention the added environmental benefits of opting to pop in the back seat of a coup instead of flying commercial. Plus it’s fun!

Still skeptical? Let me put the idea into perspective:

If you drive, you get on the road every day with hundreds if not thousands of strangers, all hurling through space in the same steel and metal contraptions. You trust all of those other people to be safe and responsible. So why would taking a ride from one of them be any different?

If you prefer public transit, services like Lyft and Uber, or even old-school taxicabs, then you’re already taking rides from strangers anyway. Why not get the same benefit for free and mix in a little adventure while you’re at it?

Some would have you believe that the art of hitchhiking is dead and that it’s unsafe, but I beg to differ.

In the past 7 years, I’ve caught hundreds of rides around the world, on my thumb, completely without incident, and have met dozens of others who have done the same. You just need to know where to do it, what to look for, and what to avoid to take up this thrilling tradition of riding with strangers. Let’s get started! 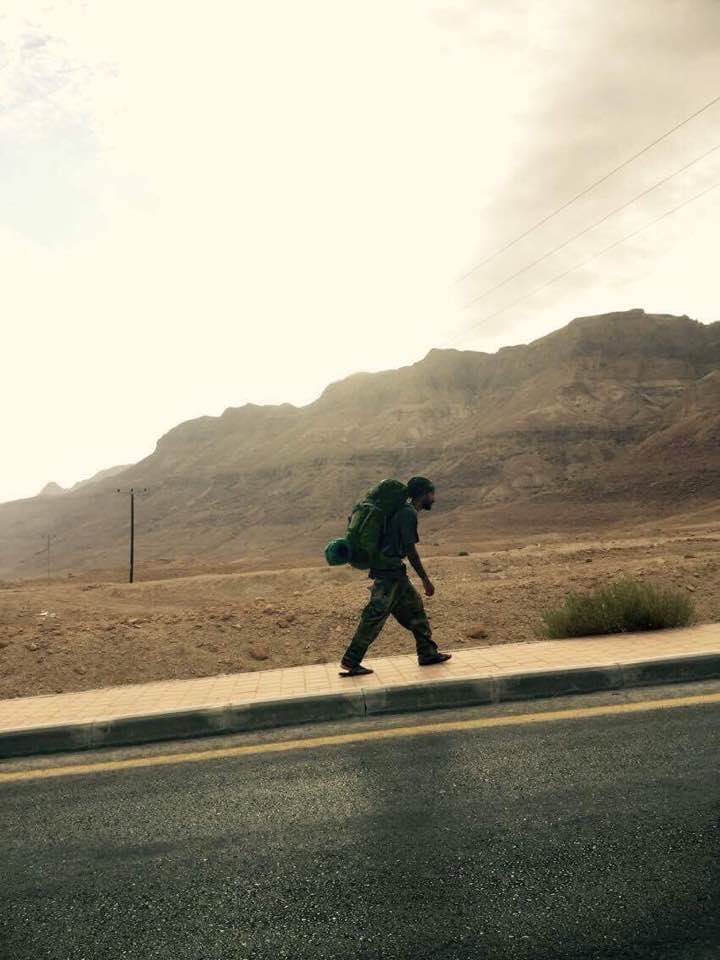 Where to catch a ride

The best places to be picked up may not always be the most obvious.

When I first started this form of hybrid-pedestrian travel, I thought the best place to find a ride was on the side of a busy freeway. Given the sheer volume of cars, statically someone was bound to see me and pull over. But after many hours of waiting and many miles dangerously hoofed with a heavy bag, I quickly learned that my logic was flawed.

It’s hard to get a ride out of big cities and on busy streets.

I don’t know if this is due to diffusion of responsibility on the drivers, or the mistrust people naturally have for each other in densely populated areas, but whatever it is, avoid trying to get rides in these places if you can help it.

The better option is to wait at a freeway entrance or on-ramp with a shoulder for the cars to pull over onto, preferably on the outskirts of town. Here you’ll find people starting a journey of long distance and more willing to pick up a stranger.

Gas stations are another good place to find a ride. You’ll get a chance to talk to curious drivers while they fill their tanks, and quickly prove that you’re not crazy, just in need of a lift. There’s also a good chance that they’re going far if they’re stopping to fill up on petrol, especially at a fuel station in the middle of nowhere.

If you’re shy and don’t want to ask for a ride directly, you can sit in front of the station door or parking lot exit with a sign declaring your destination. Sometimes you can even get the gas station employees to help find you a ride when customers come in to pay. Be open and friendly and you’ll be on your way in no time.

What kind of ride do you want?

Choose between a civilian car or a commercial big-rig truck.

Typically, an eighteen-wheeler will be going further than your average car, but they’ll be doing it at a snail’s pace. Big commercial trucks are not only slow in general, they also usually have to stop at weigh stations, and the drivers must take mandatory, timed breaks before they are allowed to get back on the road.

Cars tend to be quicker, although usually going a shorter distance. Sometimes you’ll get lucky and be picked up by someone on a cross-country trip to visit relatives, or a couple moving to a new home miles away, but it’s rare. Normally, commuters are only traveling a few hours away, but this is the most common ride available. Really, it all depends on the driver. 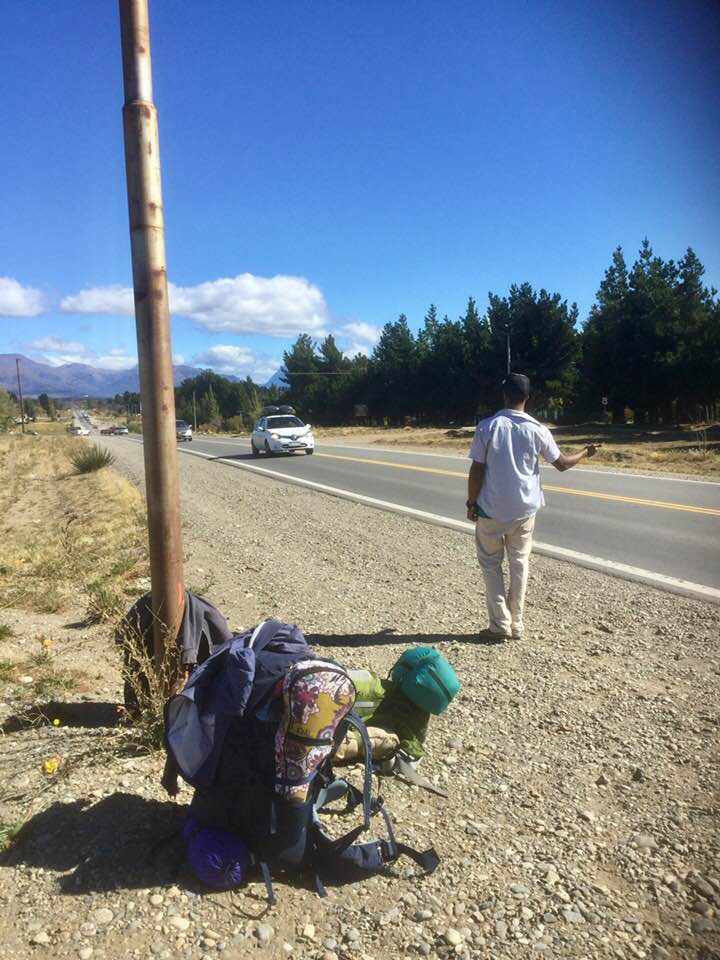 This is the most important part of hitchhiking: who to take a ride with.

The #1 rule here is to trust your gut. Do not, I repeat, DO NOT get in a car with someone who gives you bad vibes or makes you feel uncomfortable.

Even if they’re going straight to your grandma’s front door, politely decline and continue waiting. Another car will come along with someone who feels safer. Be patient.

With that disclaimer out of the way, here are a few common types of people who may stop for you:

Nice, friendly people who are happy to help when they see another human being in need. All smiles and full of conversation, getting picked up by these people can lead to long-lasting friendships well after you’ve exited the vehicle. Often times, these rides can even lead to a meal or a place to crash for the night. Remember, there are good people everywhere on this earth.

This person can be of any age. They may see you on the side of the road and worry about your safety. They believe all they’re told about hitchhiking being “unsafe” and think it’s better that they give you a ride and try to talk some sense into you instead of passing by and worrying about seeing your face on a milk carton a week later. These are sweet, kind people who mean well, and you can spot them straight away.

Rubber tramps, as they’re known in the bum community, are other travelers, past and present. Whether it’s an old hippie who wants to tell you about the good old days when he used to hitch all around the country or a bunch of party animals in a van on their way to Burning Man, Coachella, or whatever other psychedelic festival is en-route, these guys will always make room to get you where you’re going. If you’re a smooth enough talker or have something to barter, you may even leave with some party favors yourself.

Truckers get a bad rap in our culture as being a bit weird and crass, but they’re some of the nicest people I’ve met in my adventures on the asphalt. These guys are lonely on the road, driving back and forth long hours over long distances to put food on the table. Sometimes they need some company. If their destination happens to be close to where you’re going, it’s a win/win for everybody. Also, trucks are often the most comfortable way to get around. Remember that when a big semi pulls over after you’ve been waiting all day in the rain.

At the end of the day, who you take a ride with comes down to knowing yourself, trusting your intuition, and being able to get a good read on people.

These skills get better with time and practice. Obviously, your unique circumstances will affect your decision-making process. Gender, whether you’re traveling alone or with a partner, and which country or environment you find yourself in will all play a role in who you hitch a ride with. But always remember: the experience should be enjoyable, challenging, and safe. Be alert, be patient, and be open to the experience.

Here are a few things that I’ve found helpful in my experiences on the dusty trail. It’s advice that, like the wanderer on the side of the expressway, can be taken or left, but I promise it won’t hurt to try:

Bring something to share with the kind folk who do decide to stop and let you in.

This can be anything from some candy in a bag to a trinket made with materials you found while waiting to get picked up. Be creative. Sharing a gift is a nice gesture and can put both parties at ease right at the start of your relationship – the perfect icebreaker for a new beginning.

If you’re traveling around a foreign land, a translator app on your smart-phone is essential.

Google translate is great, but there are a bunch of other free apps as well. At the very least, try to download an offline dictionary so that you can fill in the blanks in the conversation. If you don’t have a smart-phone, pantomime to your driver to use theirs. The word “Google” is international. I’ve had some great experiences laughing and passing a phone with messages back and forth with drivers who didn’t speak a lick of English. Using this technology can make for a really fun ride.

I know it sounds weird, but try not to fall asleep.

The truth is, days of traveling can get exhausting after a while. On your 5th or 6th ride of the day, it’s very likely that you’ll be pooped, especially if you’ve had more of an emphasis on hiking rather than hitching. The last thing you’ll feel like doing is having a chat with another interested driver.

That said, it’s always good to at least try to keep a conversation going. If you don’t feel like talking, roll the window down or turn up the radio, whatever you need to do to stay awake. You don’t want to miss your stop while you’re counting sheep. Besides, it’s simply polite to be conscious with your new temporary chauffeur. 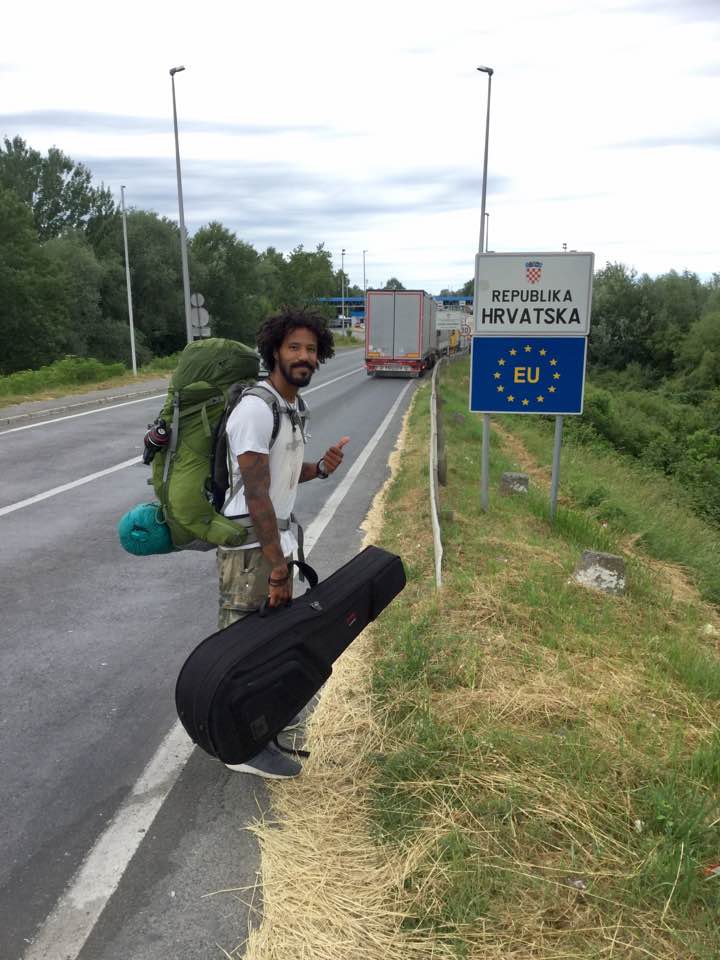 In this day and age, you can find a ton of online information on all kinds of topics, and hitchin’ is no exception. Hitchwiki.org is a one-stop-shop for all things hitchhiking. There you’ll find maps, testimonials, and recommendations for thumb-travelers all over the globe. There’s even a section for drivers who want to pick up hitchhikers. Definitely a great place to get started.

If you’re a bit trigger shy when it comes to hitting the side of the road and going for it, there are places where you can practice and ease your way into riding with people you just met. The ride-share sections of community sites like Craigslist.org and Gumtree.com are a good start. In Europe, you have the option of blablacar.com, a long distance carpool service that matches riders with drivers. Although this is a paid service, it’s a great way to get your feet wet in the world of hitchin’.

So, get out there and do it!

Hitchhiking can be a zen endeavor. I compare it to fishing. Putting your thumb out is equivalent to casting that line into the deep blue. Most people will see you and blow right past. Sometimes people will pull over and nibble, but they aren’t taking a convenient route or can’t find room for you and your pack together, and you have to let ‘em go. But then, sometimes you land just the ride you were looking for, one which will take you all the way. It’ll be a long time before you forget that lucky catch.

You won’t get anywhere without going out and trying first. So pick up your gear, get out on that road, and catch the next big ride to wherever you dream of going!