Travelling solo in Azerbaijan isn’t the usual choice for an independent travel adventure.

In fact, travelling in Azerbaijan isn’t really the usual travel choice at all. The mysterious “land of fire” is one of the least visited countries in Central Asia. Since travelling in Azerbaijan is such an unusual choice, the country’s infrastructure isn’t really set up all that well yet to accommodate international tourists – there is no public transport outside the capital, sites of interest are not advertised and are extremely difficult to get to, and nobody either speaks English nor has even heard of it for the most part.

If you look for authentic local experiences when you travel, and the opportunity to push yourself and test your boundaries and limits then the rugged, unexplored landscapes of Azerbaijan could be just the place for that. 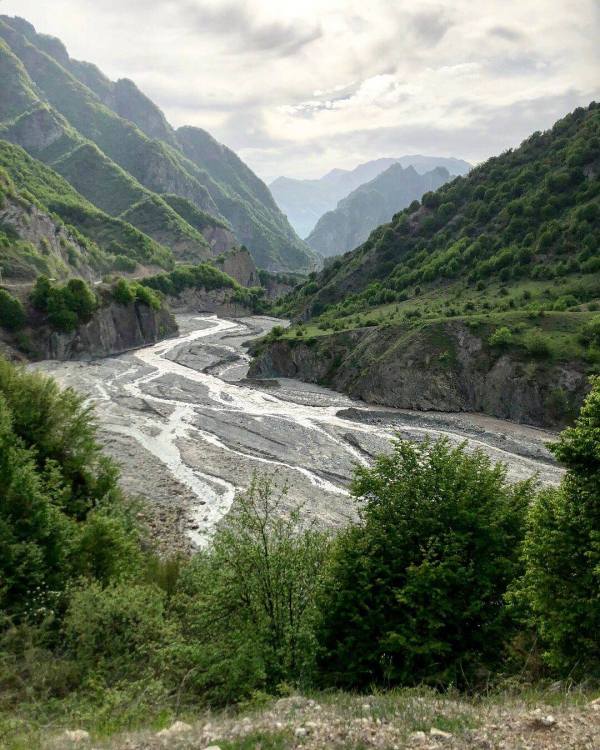 As my plane touched down in the glittering Azeri capital of Baku, I was apprehensive. There were few resources available to help me plan my trip to Azerbaijan and the handful of people that I had spoken to about venturing there had warned me that the country was ubiquitous with being scammed and tricked at every turn. Safe to say, I was nervous.

As the sun began to set, I hopped in a cab from Baku international airport and travelled to my hotel. I was pleasantly surprised with the scenery all around me. The streets were clean and modern, with familiar designer names like Gucci, Versace and Louis Vuitton peering out from every corner. The people were well dressed and the cars were flashy.

Baku was an interesting juxtaposition of old traditions meet contemporary new culture. Here, ancient mosques and the Arabian style decor of the old city still remained perfectly intact with their labyrinth-like network of narrow alleyways and stores selling lamps, lanterns and rugs almost transporting you back in time. Engulfing the old city though, modern Baku had expanded around it – with high rise skyscrapers, contemporary modern architecture and futuristic light installations, Baku was sexy. 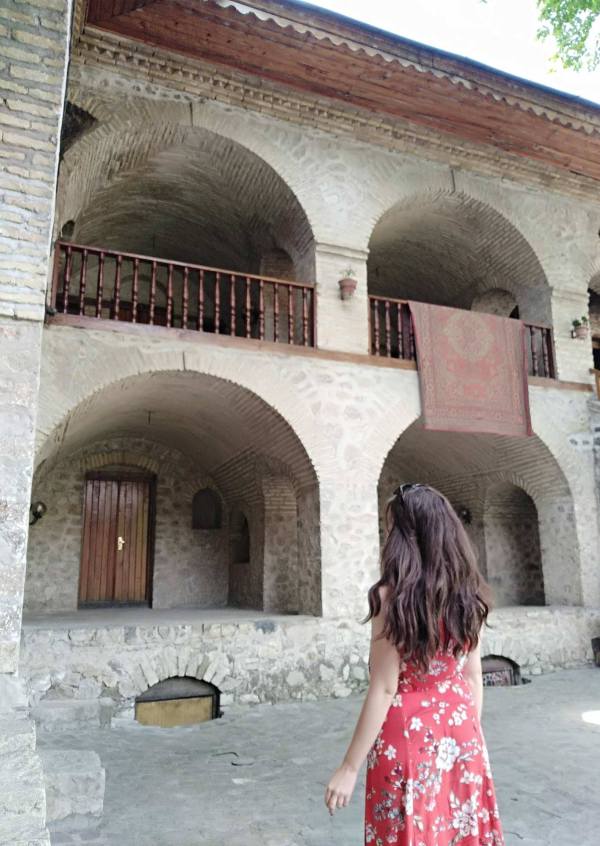 After travelling around the Ukraine, I was exhausted when I first arrived in Baku and fell asleep pretty much as soon as my head hit the pillow. I awoke with a start the next day by the heavy knocking of housekeeping. I had overslept! I got ready and headed down to the front desk. Since I had unintentionally overslept and completely missed breakfast, I asked the Receptionist for recommendations on nice local places to eat. He advised that he was finishing his shift and insisted on taking me for lunch. As a solo female traveller, I am often wary of friendly strangers but in this instance the Receptionist – Mehmet, seemed kind and friendly and so I agreed.

Mehmet took me to old town Baku and introduced me to his friends – an incredibly warm, welcoming and well travelled group of Azeri men and women. We ate shakshuka (Arabic breakfast) together since I had missed the actual breakfast time and when the bill came, Mehmet and his friends insisted that they paid since I was a guest in their country. 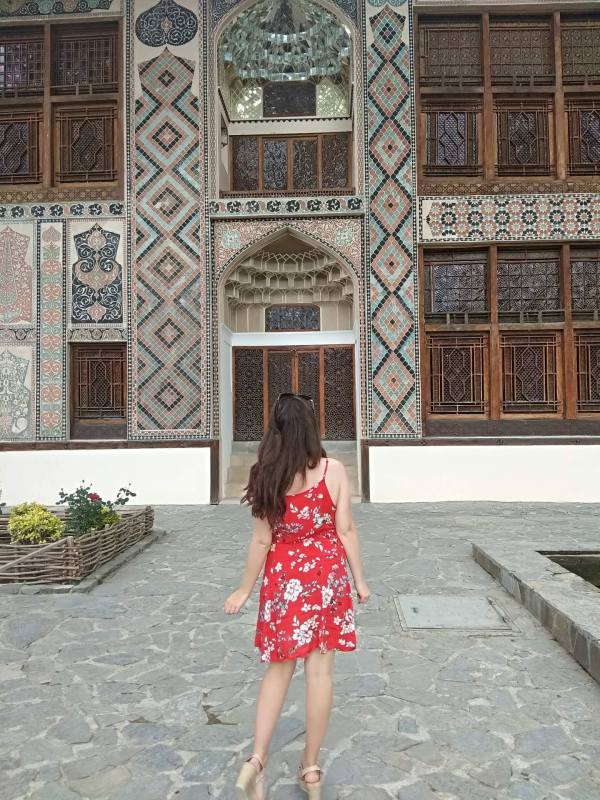 I spent the next few days with this newfound group of Azerbaijani friends visiting shisha lounges, strolling through scenic parks and generally exploring Baku as a local.

Little is known about Azeri culture globally but it is incredibly unique and fascinating.

Some aspects of the culture (like the food, and the religion) are similar to what is seen in Arabic culture, and Azerbaijan identifies itself as a Muslim country. However years spent under the soviet rule means that very few people in Azerbaijan are now actually practicing Muslims. Beautiful, ornate mosques are scattered throughout Baku but you seldom hear their calls to prayer since the country is largely secular. Unlike people in most Muslim nations, Azeris possess a fondness for drinking and vodka much like their Russian neighbours. They will share shisha with you like the Arabs, but then take vodka shots with you and shout “Nostrovia!”

In high spirits after my time in Baku, I ventured to the more rural parts of Azerbaijan. I travelled through isolated mountain towns and villages, to the ancient capital of Shamakhi, and the famous silk road trading villages of Lahic and Shekhi before crossing the border into Lagodekhi, Georgia. This journey sounds pleasant and cultural, and indeed it was – however it definitely requires an element of bravery and planning. 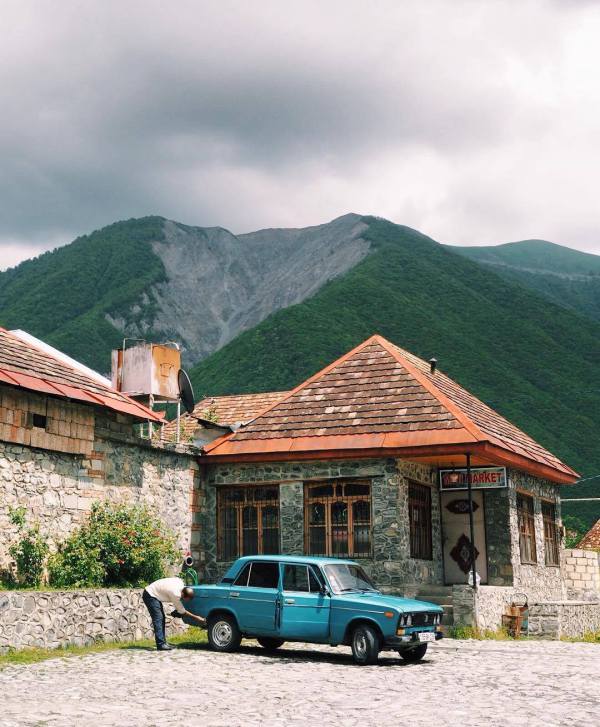 The only way to get around most of Azerbaijan is by marshrutkas which you may be familiar with if you have ever travelled around Middle Eastern, Central Asian, or Soviet countries. Marshrutkas are small shared minivans that seat around 8-10 people and leave when full. In Azerbaijan, there was only one marshrutka per day in most places.

Oftentimes the places that I wanted to visit were so remote that the marshrutkas didn’t even go there and so, the marshrutka drivers would drop me off at the outskirts of a town or at a random fork in the road and then from there I would have to find a ride to take me the remainder of the way. Sometimes this was an old Azeri lada cab, other times it was a friendly local and others it entailed sitting in a farmer’s truck that was transporting sheep and other livestock from A to B.

In many parts of Azerbaijan, like the silk road trading village of Lahic, people do not speak the national languages of Russian or Azeri, but their own local languages and dialects which they have developed as a result of centuries of isolation away from civilisation. In Lahic, a language called tat is spoken which is closer to Iranian farsi than it is to Azeri. I communicated with locals by a mix of miming (if I ever participate in a game of charades in the future I will most certainly win!), using a Google translate app on my phone, or showing images to get across what I wanted or was trying to stay.

Travel is a way to push your limits and test yourself, and to see the world from a new perspective

I participated in homestays, rode around the countryside on horseback and dined with locals. One thing that was prevalent throughout my trip was the kindness of the Azeri people. Although we couldn’t communicate with each other, they tried their best to help and accommodate me. In Lahic, locals asked me into their homes for lunch with no expectation of anything in return, just simply the compassion of helping out this strange solo British woman travelling across Azerbaijan alone. 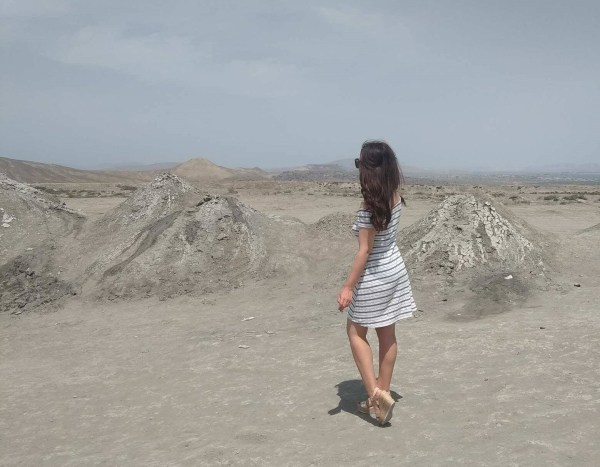 I personally believe that travel is far more than just seeing the sights, sampling the local cuisine and just having fun. Of course, it’s important that you enjoy your adventures, however travel is also a way to push your limits and test yourself, and to see the world from a new perspective.