I was looking for a ship to get away from the island, but found myself in one of the most dangerous places on Earth instead

What’s the difference between just another trip to a new place and a full-scale adventure? The lack of planning. When nothing is certain, anything might happen. This was the case with my gamble-like venture across the Dominican-Haitian border.

A bit of history:

Isla Hispaniola was colonized by Spain in the end of XV century, the western part was later claimed by France, eventually becoming what is now called the Republic of Haiti. It was plagued by hardships and disasters since the beginning, starting with the diseases that the Europeans brought across the Ocean, decimating natives who lacked the immunity to this new threat. Many African slaves were brought to the island to work on the sugar cane plantations along with the islanders who survived the invasion. Three centuries later the mixed population revolted against the colonial rule and waged a bloody war that ended in 1804 with the declaration of independence. 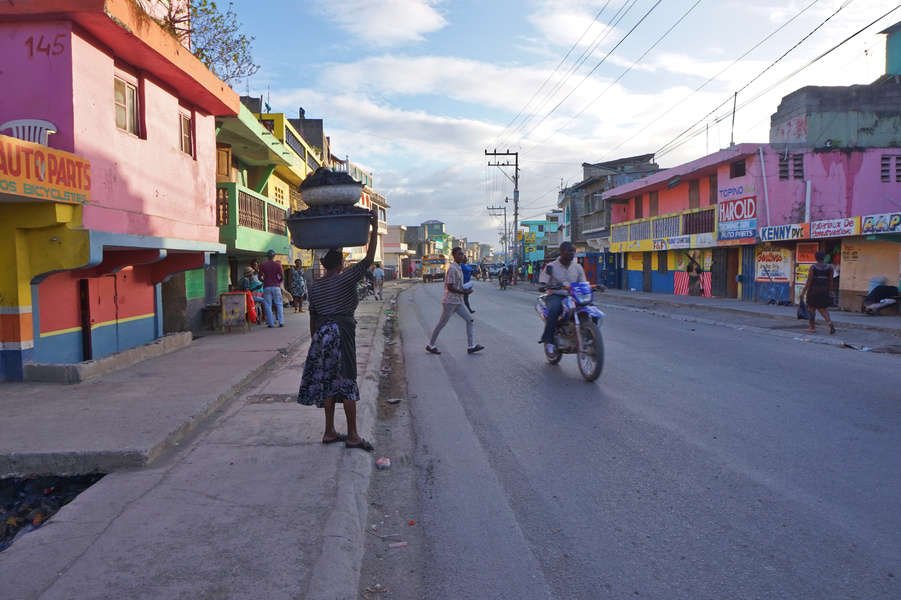 Nowadays, Haiti is the poorest country on this side of the planet and one of the most impoverished in the whole World. The bad luck of the Republic never ended, it still suffers from famines, epidemics, power struggle and natural disasters. Just recently, in 2011 there was a mighty earthquake with the epicenter just 25 km away from the capital, Port-au-Prince. It was a tremendous catastrophe, killing hundreds of thousands and leaving more homeless. Many are still living in the camps for the internally displaced, which is a temporary solution that is going to outlast many permanent ones. They have to live in such miserable conditions, that most people in the First World can’t even imagine.

With slaves to Haiti came an African religion known as voodoo, which is still practiced in more remote parts of the country. In modern culture it is widely known for its human dolls, zombies and curses, however voodoo priests also practice defensive and healing magic, but this side is not well known to outsiders such as we are. Unfortunately, at the time of my arrival there it was the fasting season, without any festivals or other events.

It was the end of February when I crossed the border in Dajabon, that looked more like a military encampment or a lifeguard base near an emergency zone. My first stop was planned to be in Cap-Haïtien, where I already had a local host from Couchsurfing. I still had to get there first. The fun began right after passing the border, when I got into (or, rather, onto) a bus going to Cap-Haïtien. In this country the locals mercilessly cram themselves into anything that can serve as public transport, with no regard to personal space and comfort. They keep coming until it’s impossible to take any more people and the last bit of air is squeezed out of the salon. 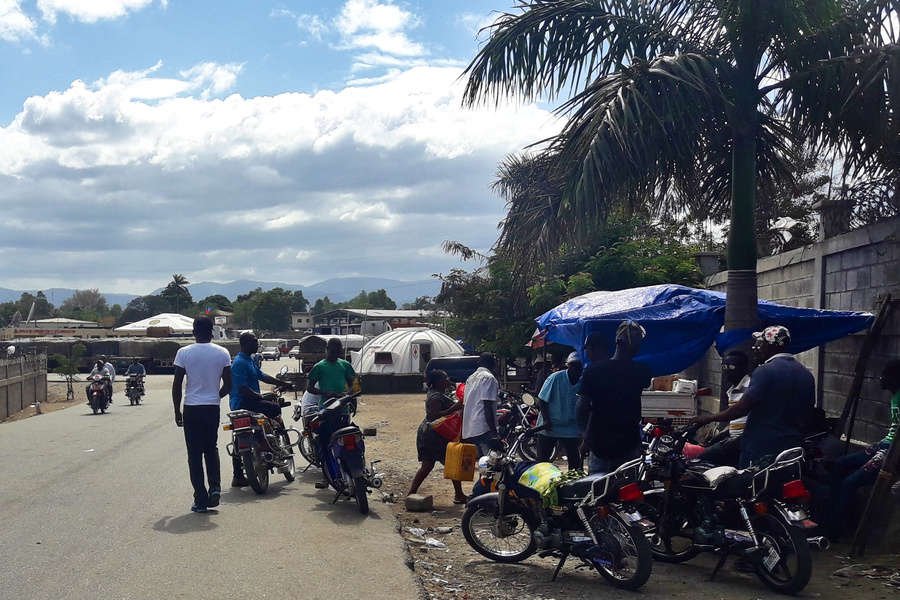 It’s hard to withstand these conditions – extremely hot and cramped space, filled with sweating bodies pressing from all sides. So I climbed on the roof instead and the ride was just fine until the road police took notice of me and stopped the bus. Riding a bus like this is nothing special, there were 4 more men sharing the roof with me, but as a white guy I could be seen from afar and thus prone to get a special treatment, since the local population is 100% black. In this case the cops checked my passport and demanded that I got inside the bus, which already contained at least 3 times more people than it should. Arguing with them proved to be useless, so I had to comply and pushed my way inside to everyone’s amusement.

I couldn’t stand it. After about a minute in these conditions I tried to make the bus stop, to reclaim my rightful place on the roof. That was rather challenging, since the locals don’t even speak Spanish, let alone English. Their language is called Haitian Creole, which is a French-based mongrel language, so those who speak French can mostly understand it, but that’s ain’t me.

Took me a while to reach an understanding with them – on my demands to stop the bus they just nodded happily and done nothing, but eventually someone figured out, what this weird foreigner is fussing about and reached the driver with a request for a stop. I triumphantly returned to my sweet roof spot and hid behind the luggage.

Cap-Haïtien welcomed me with omnipresent mountains of garbage and blackish rivers of filth flowing among them.

Rugged gray slums of rough unkempt buildings with protruding rusty armature everywhere create a striking contrast with the graceful colonial buildings. Sometimes houses are painted by hand, but not everybody can afford that. All the advertisements and signboards are also painted, I don’t think I’ve seen anything printed in color. Dust, stench and noise rise up from the streets and gutters to tarnish the sky itself. Well, maybe not that high, but surely high enough to reach the upper floor and ruin you dinner. 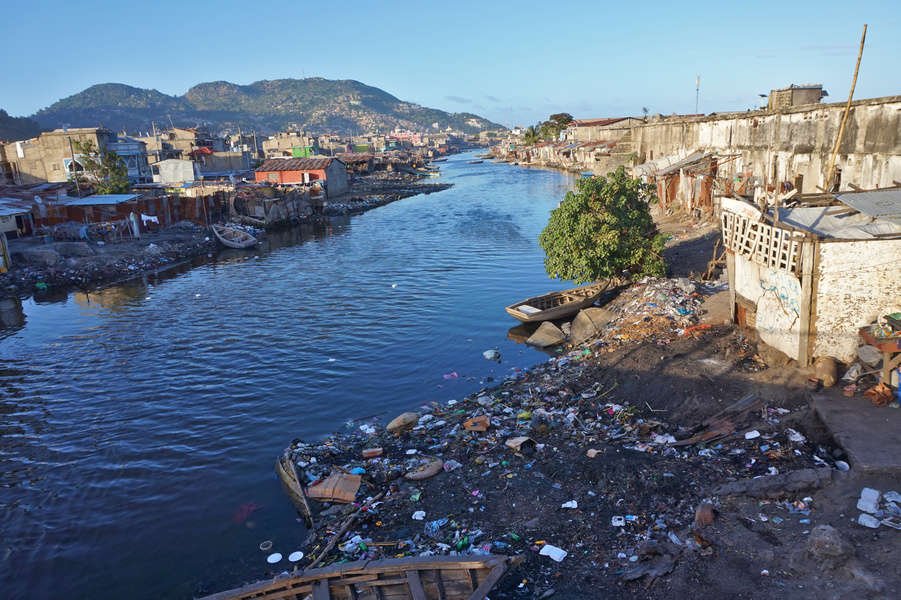 Since my supposed host was not available upon my arrival, I had to stay in the first motel I could find for the night. I dropped the heavy backpack there and went out to acquire some cash. It turned out, the local ATMs won’t accept my card, for some reason. This is the 3rd time in the last 6 month when I found myself in a new country without money or the means to get it. It’s getting annoying. Luckily, this time I had some reserve USD and could get by without much trouble.

At this point I started to wonder if I made a mistake coming to this country.

It was hard to imagine this place to be the one where anybody could hop on a ship to a neighbor island, especially without a sizable sum to back them up.

Nonetheless, having spent the night in a room with a horrible quantity of mosquitoes, I took a morning bus bound for the capital, Port-au-Prince, where I was hoping to find a ship out and also had another couchsurfer, Muhammad, who agreed to host me.

He instructed me to proceed to CIMO Headquarters (Riot Police) and ask a police officer call him as soon as I disembark from the bus. He mentioned that he is a police officer as well and the place where I will be dropped off is dangerous, so I should not tarry.

After a long ride across all the country, the bus came to a stop with a creak nearby a camp for the internally displaced, of all places. So I made my way to CIMO as I’ve been told. However, the policemen there didn’t seem to know Muhammad, neither could they recognize the guy from the photo.

Luckily, back at the bus station of Cap-Haïtien I bought a SIM-card with the Internet traffic, so I was able to contact him directly through the Net. Some half an hour later he showed up in a police jeep. He turned out to be not some nobody, but the Security Advisor for the Haitian President. Unremarkable at first glance, this guy actually is a total badass.

Originally from Yemen, Muhammad had been working for UN for a long time, fought in many hot spots all over the globe, including Middle East and Africa. He received military training in several countries worldwide and combined his knowledge and experience into a new system, which than used to coach the Haitian Special Forces, making them the deadliest unit on the island, feared even by the most ruthless and wild gangs of Port-au-Prince. The senior officer of CIMO also were conditioned by him, I just happened to run into the juniors, who weren’t around for long.

I learned it all that as we were making our way through the chaotic jumble of narrow and dirty streets of the capital, all of which looked like a slum. We were perpetually stuck in traffic, our tinted windows closed, so nobody would see a white man in a police car.

He also told me many things about this city and its criminal situation that seems quite extreme. It’s so serious that they have to fight local gangs on a regular basis and many neighborhoods are not even under the police control, ruled by street gangs. When the police wants to enter, they take an assault team or two, to fight their way through. And the place he picked me up from was one of the most dangerous on Earth, according to him. Somehow during my quest for a ship, I suddenly found myself practically in a warzone. Muhammad himself never leaves the house without a gun or two – there’s always a pistol in the car and sometimes an assault rifle, as well. 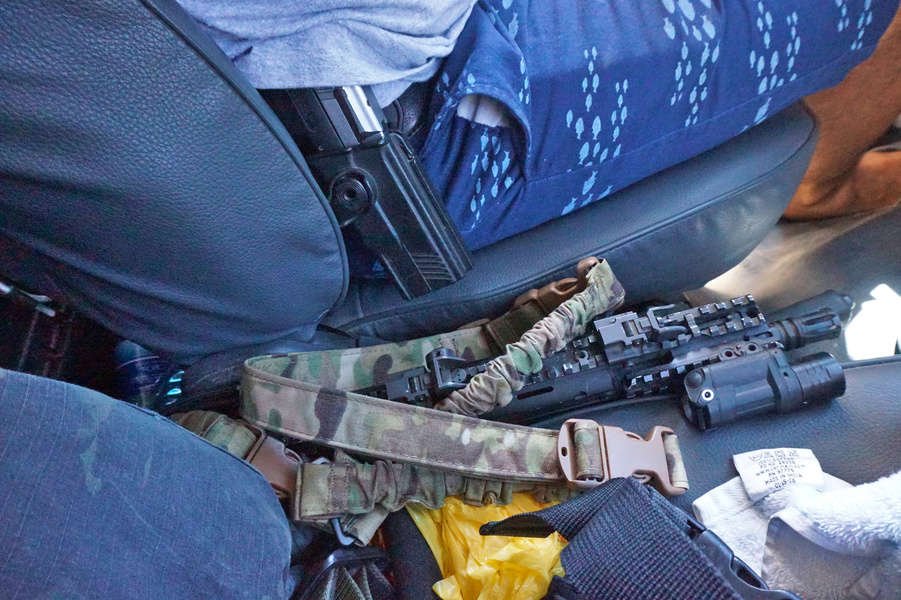 The outside handle of the passenger door in his car is intentionally broken to not let bandits open it while he’s stuck in the traffic. Mugging and carjacking are very common, so one should be prepared to face the danger.

“…and then I shot him in the face 3 times…”, I remember him saying, when he was recalling the occasional robbery attempts.

To simply get through the horrible Haitian traffic we had to use the police siren and flasher, pretending to be on duty and “escorting” some VIP that came in handy, just in front of us. Even cheating like this we got to the safe haven of his house in more than an hour. The house itself reminded me a fortress, with a walled and guarded zone around a couple of apartment buildings where important foreigners live.

Later in the evening, after a dinner of some Yemeni dishes, we were conversing on the terrace overlooking the streets of Port-au-Prince shining with electric lights. Even a third floor commands a decent view of the entire city, as it all composed of small concrete boxes, rarely taller than 2 floors.

“You see that group of lights?”, Muhammad was saying over homemade cocktails, “it’s all bandits. And that one. And those three. It’s all full of bandits.”

Then he proceeded to muse about this situation when people born here don’t really have any other choice than to turn to crime to survive. They’re too poor to have a choice, that’s the reality of Haiti. 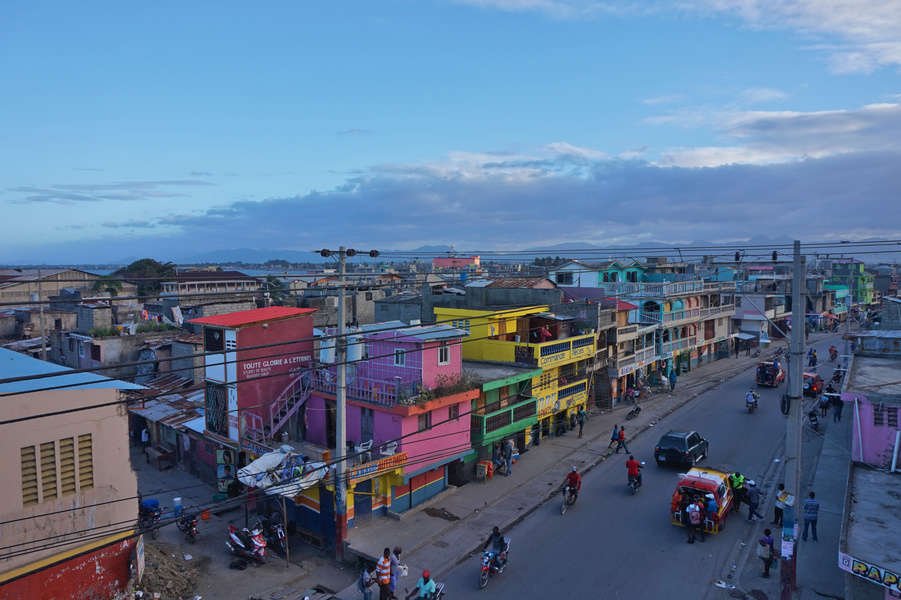 Come morning, I’d leave for the East, there was an entire island to cross, a border and an airport with their own bothers and problems, but that’s another story altogether.

The next day, through his own channels, Muhammad confirmed my suspicion that I’m not gonna find a ship here. There were no ships bound to Jamaica or anywhere else in the port. And even if there were, the port itself is off-limits for random people like me. The continent had to be reached by air, then. And I had to return to the Dominican Republic to take a flight from Punta Cana, the same place that I arrived into, a month earlier.

At the end of my stay in Haiti, on the evening before the departure I got invited to a party for UN agents. Somebody was leaving for home and their friends gathered to say goodbye. It was too good to pass up, so I didn’t think twice before accepting. An interesting event, I’ve never been among this kind of people. Agents and diplomats from all over the world, converged in the giant slum of Port-au-Prince enjoying beer and pizza…

Come morning, I’d leave for the East, there was an entire island to cross, a border and an airport with their own bothers and problems, but that’s another story altogether.

Looking back, I understand that this was something worth remembering and it could only happen when you do just this – looking for a challenge, an adventure, an unlikely acquaintance, perhaps? It’s not the same as visiting another boring tourist attraction, that’s a completely different world out there!