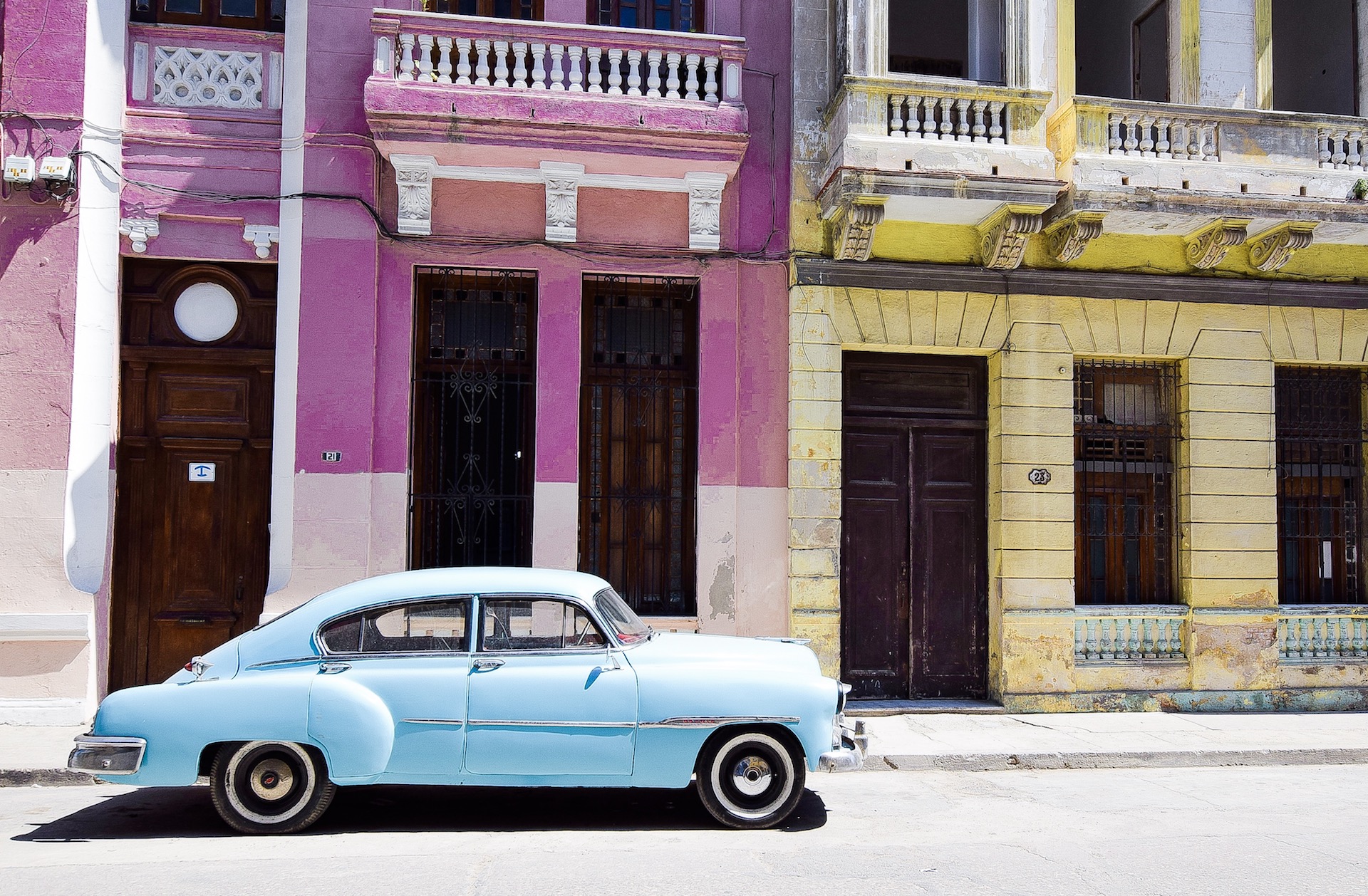 As soon as we touched down on the tarmac, I hurriedly unfastened my seatbelt and jolted into the aisle.

I was beyond eager to get off the plane. My college roommate, William, and I had just flown from LA to Panama City. We were connecting to Havana in 20 minutes and had no idea what gate we were supposed to sprint towards. As we got off the plane and found our gate assignment, something clicked in my head. I was supposed to find an ATM here… Cuban banks and ATMs don’t accept American cards and if I was going to have any money other than what was in my pocket, I needed to find an ATM ASAP.

We arrived at our gate after a 15-minute full sprint through the Panamanian airport.

Through my heavy tired breathing, I barked at the flight attendant at the gate, “Do I have time to use the ATM?!” As I gestured to the machine down the hall.

“No, no, no! The plane is leaving,” she replied equally as frantically.

William and I locked eyes, both of us disappointed.

When we landed in Cuba, our panicked state continued. We exchanged the currency we had and tried the ATM. As expected, it didn’t work. We got in a cab, nervous about the price, and headed to our apartment in Centro Havana.

We were greeted by three smiling faces, our host Yandi, his sister, and his brother. Out of the three, only Yandi spoke English, and very little at that. Luckily, between the two of us, William and I had enough Spanish speaking ability to get by.

The street our place was on looked like it had been torn out of the pages of National Geographic. 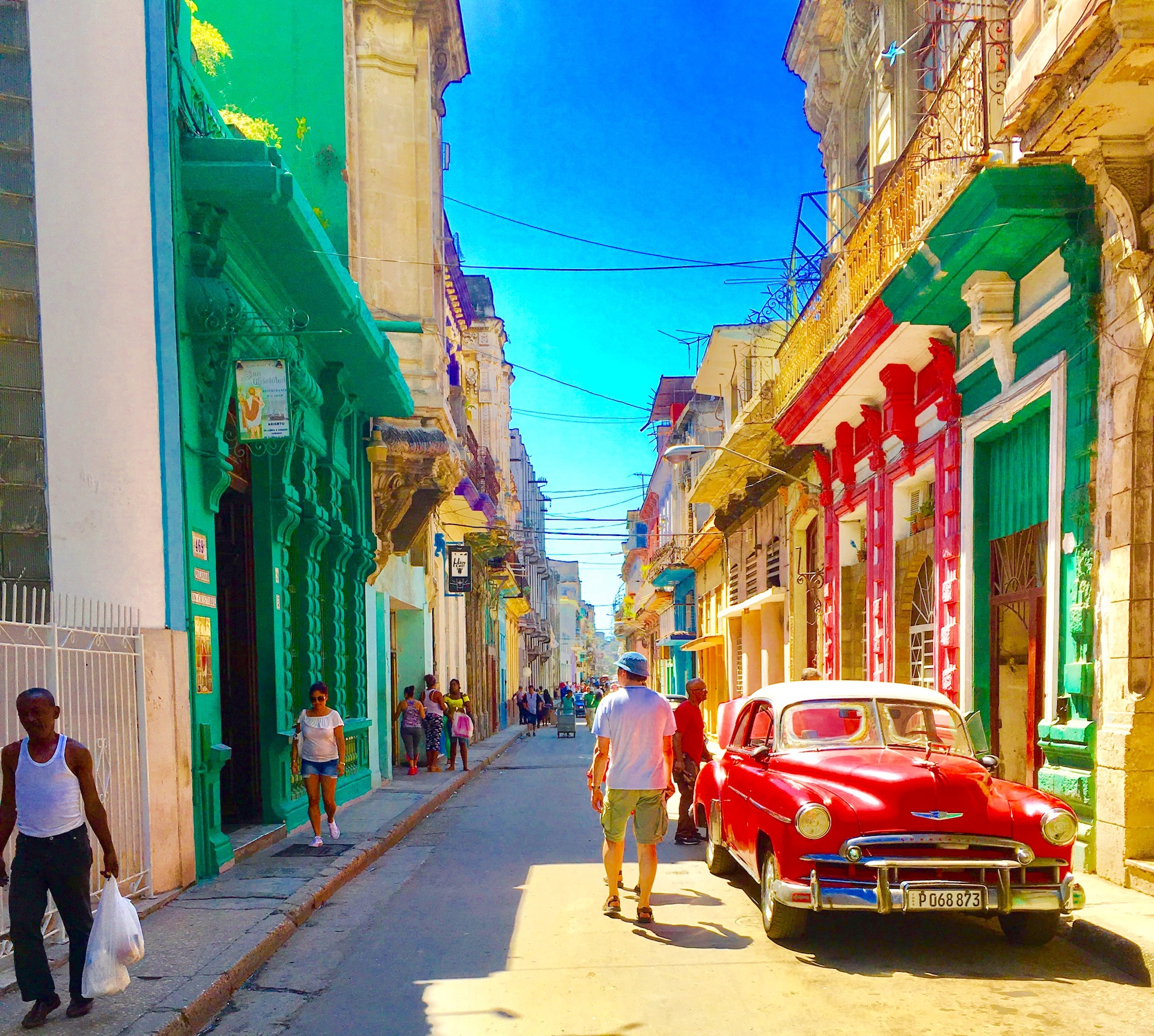 The crowded street was lined by crumbling concrete buildings, each one painted a different cheerful color. 1950’s classic cars were parked along the block, their colors just as bright and jaunty as the buildings they were parked in front. Yandi showed us our place, a cozy apartment with all of the windows boarded up complete with a leopard skin rugs, and tv with about a dozen reggaetón music videos stored on it.

Yandi was particularly fond of his music videos; every time he would leave our place he would turn one on.

After Yandi left, we put away our things and immediately sat down with a pen and paper to create some sort of financial plan for our trip. Cuba is a relatively inexpensive country to travel to from the US, but our funds were seriously limited. We devised a plan to see one site a day, only take cabs when absolutely necessary, eat as cheaply as possible, and end the night with approximately one drink each. Far from what we had originally intended.

So, we stuck to our plan, and even though we weren’t going too crazy every night, we were having a good time. We had developed a routine and we were still able to see the majority of the sites we set out to see, but something was still missing.

We still felt like outsiders. Was our Cuban experience authentic?

Were we missing out because of my stupid mistake? Often, in the evenings, our routine would leave us wanting more. We would return from our single drink nightcap, with plenty of night left to burn. We would walk home passed locals and tourists alike eager to get lost in the night.

One night, William and I were eating dinner at a cheap spot we began to frequent. The two of us could each get an order of pineapple chicken and a beer for under $10 total.

While we were there, one of the employees asked us why we were eating at his place instead of Jay Z and Beyoncé’s favorite restaurant that was down the street? We responded with some quip about us liking cheap beer, which was technically true.

Finally, after several nights of the same ritualistic inquiring, I started to ask some questions. When a familiar face approached and attempted to ask his usual question, something about having “a good time with nice girls,” I stopped him.

“Puedo comprarte una cervesa?” (Can I buy you a beer?), I shouted abruptly in the approaching man’s direction, while gesturing to the convenience store on the side of the road.

He stopped suddenly, caught off guard by my unusual offer. Then, he smiled and belted out “of course my friend! Cervesas por todos!” (Beers for everyone!)

“William, and I along with our new friend proceeded together, to the corner where we purchased three beers and cracked them open immediately.

We slammed our beers together ceremoniously and began drinking.

Then something happened, something that might not happen to every traveler or tourist that finds him or herself in Havana, or any other part of the world for that matter.

The conversation that covered topics beyond where the best food, beaches, drinks, and girls in Havana are located. Our conversation was broad and all-encompassing. Our new friend had a lot to say and we were all ears. In an odd mix of broken Spanish and English, we chatted.

Our new friend was happy to tell us how the embargo has affected him personally, how it is nearly impossible to leave Cuba and go anywhere, not just the United States unless you’re rich, and what it was like growing up under a communist government.

Perhaps the most surprising piece of information our new friend bestowed upon us was his response to the question,

“If you could leave Cuba tomorrow and go anywhere, where would you go?”

“¡Finlandia! (Finland)” Our new friend joyfully stated. Informing us that every single tourist from Finland he has met had been unbelievably kind.

After several rounds, in the early hours of the morning, we wrapped things up and said our goodbyes, uncertain if we would ever see our new friend again. We were, however, content with an evening well spent. Beers at the corner store in Centro Havana cost about a fifth of what they do at the bars in Old Havana, so we didn’t exactly break our budget.

But more importantly, we had an experience unique and enriching in itself.

We drank, laughed, and conversed with our new friend, whom at first seemed to live worlds away. But by the end of the night, was just another young guy in his twenties trying to have a good night.

The next morning, one of our last in Cuba, William and I had a refreshed sense of purpose concerning our trip to Havana and we were eager to get our day started. Today was the day we were visiting Finca Vigía, Ernest Hemmingway’s Cuban home, a day that I had been looking forward to for a long time.

Ernest Hemmingway had been a small obsession of mine for the last few years, in which I had committed myself to reading all of his published works and everything about his life I could find. We made our way from our Casa Particular in Central Havana to Hotel Ingleterra in Old Havana for a cup of coffee and to eventually hail a cab. The cab ride was long. We meandered inland, out of Old Havana, past the Port of Havana and all things tourist and familiar. Small, rugged looking homes peaked out of lush vegetation on the side of the road. After an hour or so of driving, we reached a small hill on which Finca Vigía was perched. We paid our cab driver and asked him nicely to wait for us to come back down and made our way up the hill towards the house. 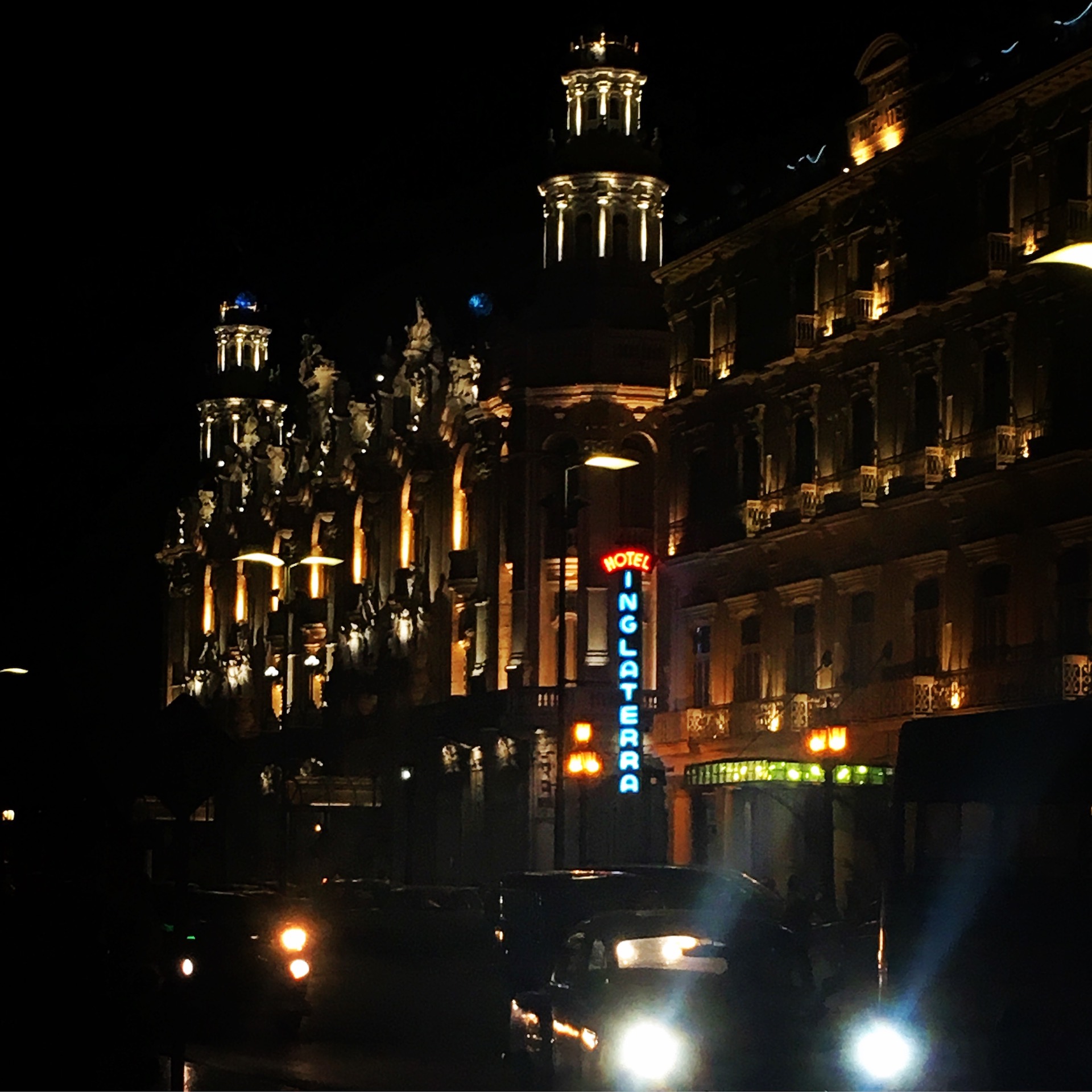 As we explored the house, I was ecstatic. We found stairs on the side of the main house, taking in the beautiful view from the top of the hill as we climbed. At the top of the stairs sat Hemmingway’s office, with his typewriter, loaded with paper, centered on his desk as if he had just gone downstairs for a cup of coffee before a long writing session.

We then made our way down the stairs and past the pool to where Hemmingway’s fishing boat was displayed prominently, towering over the side of the hill in all its glory. I was in awe of the wooden ship. I circled it several times taking pictures. As I made my way around to the stern of the ship to try to capture a photo of the helm, I noticed William sitting on the catwalk with his back towards the boat staring down the hill.

He was watching a baseball game going on at the bottom of the hill.

The players, children, could not have been older than 10 or 11. I sat next to Him, resting my arms on the railing of the catwalk and began watching the game as well. As we were watching, an old man on the edge of the field began staring at us. I pointed him out to William and suggested perhaps we move on, but he ignored me, and we kept watching. The old man began waving and motioned for us to come down the hill. Fearing reprimand of some kind, I turned to express my hesitation to William, but before I could say a word he was darting down the hill. I reluctantly followed.

To my surprise, a smiling old man, who was wearing an entire Chicago Cubs uniform, greeted us. He introduced himself as Jorge, the coach. So again, we engaged in conversation with a new friend. Like our friend from the night before, Jorge was eager to tell his story. We talked life and baseball and at the end of the conversation, Jorge invited us to join in the game. William jumped right in as I stayed back to keep chatting and shoot some pictures of the action. As William effortlessly made contact with the first pitch of his at-bat, knocking the ball into the outfield (the pitcher was 8), Jorge had asked me if I would ever come back to Havana. 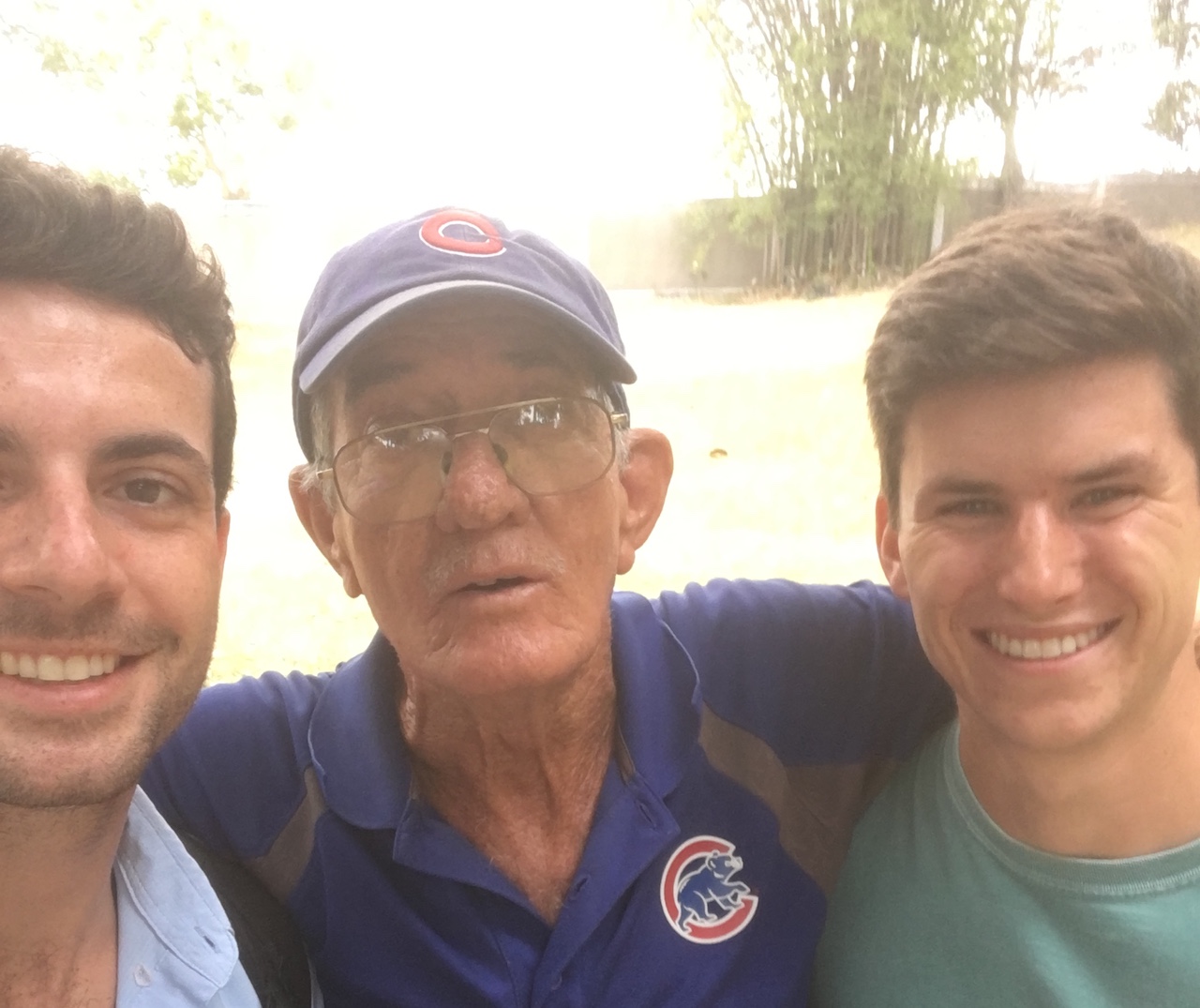 After I told him that I definitely planned on returning he said he had a favor to ask, I nodded. Jorge then asked William, who had returned from his hard-fought game, and I that when we come back to Havana to please bring his team some baseball equipment since American made goods are hard to come by. We assured Jorge that when we return to Havana we would be sure to bring along all the baseball equipment we could and seek him and his team out.

Shortly after our time with Jorge, William and I left Havana.

We both agreed, however, that we would be back.

Whatever the political climate may be, we would find a way to return, bats in hand happy to greet Jorge and his team. Again, hanging out with Jorge and his team was not what we had in mind when we planned to visit Finca Vigía, but it proved to be a more fulfilling experience.

Havana was an overwhelmingly beautiful city.

And even though we missed out on some of the more elegant travel experiences one might have in Havana, our experiences were worthwhile and impactful. After leaving, it seemed obvious that as much as the colonial architecture, 1950’s American cars, and white sand beaches contributed to Havana’s beauty its people contributed equally.

It’s refreshing to travel somewhere expecting to be overwhelmed by the physical beauty and to find how much more meaningful personal connections are than the sites we see.