Exploring Kazimierz and Kopiec in Kraków

My daughter and I arrived in Kraków on a Saturday, having booked a sleeper car on the overnight train from Vienna. After the delights of Austria, I was looking forward to the train ride to Kraków. The idea of an overnight trip on a train had enchanted me since I first saw Irving Berlin’s “White Christmas” as a child, and I was thrilled that we would have our own compartment.

While the hum of the tracks lulled us to sleep, the engaging and disengaging of train cars at various times through the night woke us periodically. During one particularly jarring stop, the pushing, pulling, clanging. and banging was particularly fierce.

In my exhaustion, the thought crossed my mind that we were being abducted and transported to Siberia – and I was too tired to care.

When we awoke for real the next morning, we opened our snack boxes provided by the rail company – brown bread with cheese and jam and butter. We ate our breakfast as the morning light revealed the outskirts of Kraków to us. I was excited; it had been a number of years since my last visit. When we arrived at the train station, Kraków was just waking up.

We went first to visit the Kościół Mariacki before we found the owner of our rental apartment to obtain the key. The Kościół Mariacki, is a basilica dating from the 13th century and built in honor of St. Mary; it sits on the edge of the main square. We had a flat above the Zoo pod Mikroskopem on ul. Floriańska. This tourist attraction offers creepy music and a black light strobing effect (not to mention an actor in an amoeba costume) to lure in customers. We soon realized that coming “home” after each outing involved a bit of deft skill to avoid being mistaken for customers. 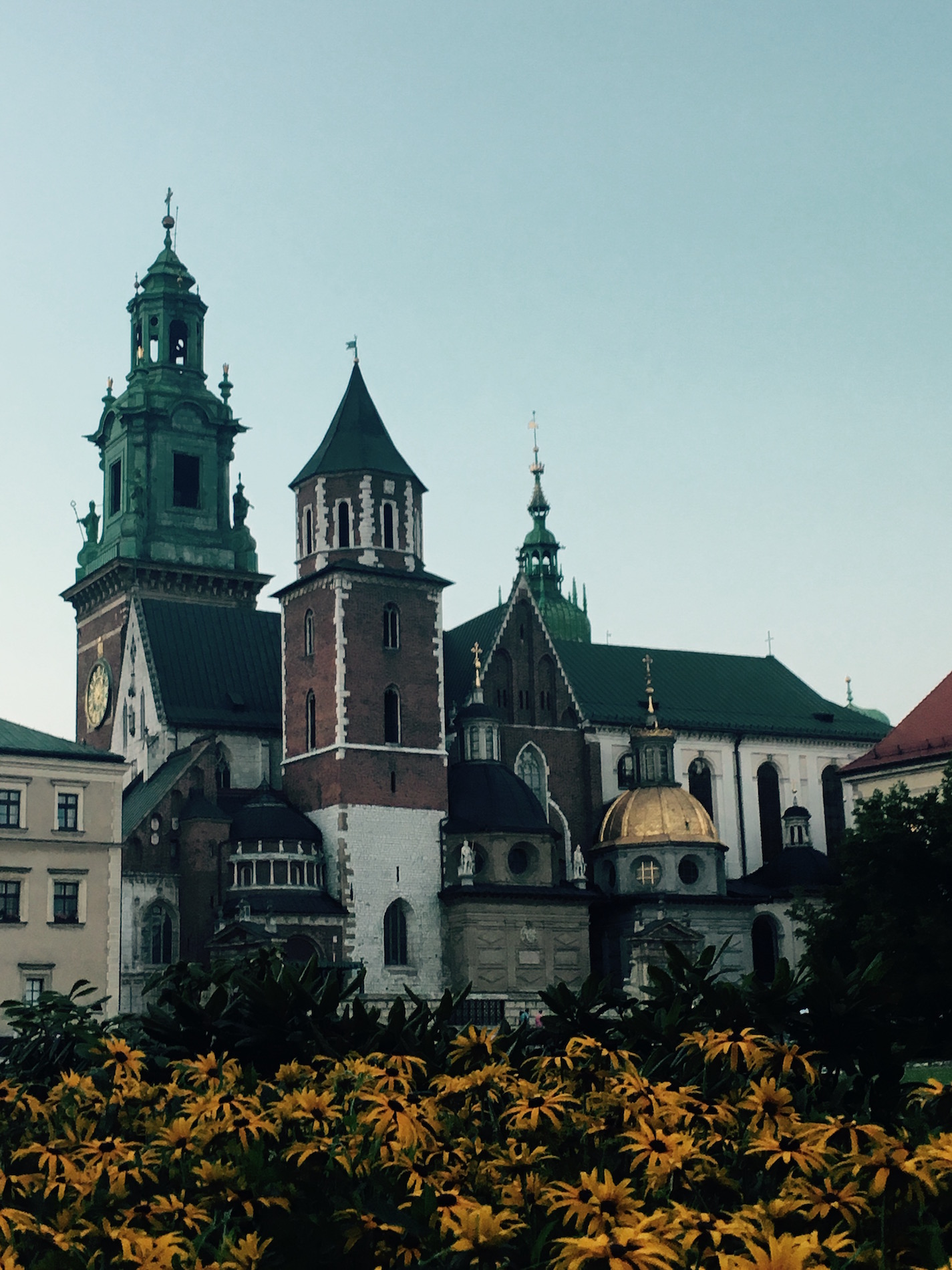 After dropping off our bags, we hurried to visit our favorite places – Wawel and a few of the other beautiful churches, like St. Anne’s. Then, we headed to the Sukiennice to shop for Polish treasures – silver, leather, tablecloths, wooden boxes, and other souvenirs.

On that first night, dinner was at my favorite Bar Mleczny on ul. Grodzka. Milk bars serve good, old-fashioned Polish food; the menu varies based on the availability of products, but diners can generally trust that there will be pork chops, mashed potatoes, and beets. We ate our fill of pierogi and bigos (hunter’s stew), and we shared our space with tourists and some characters, but that is the charm of a Bar Mleczny. The reduced prices exist to help pensioners and students. The great food and kitsch attract tourist, too, so everyone dines in the same space, often elbow to elbow. 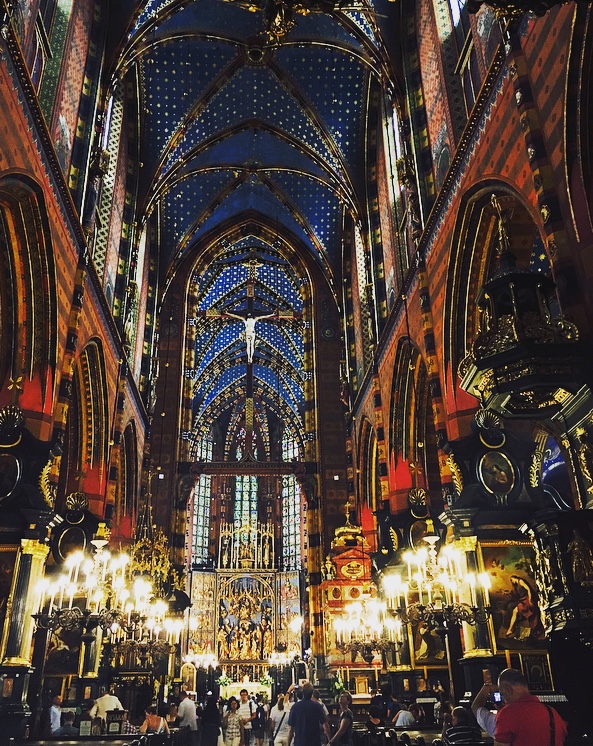 After our meal, we headed back in the direction of the train stations to attended “Arsenic and Old Lace” at the Juliusz Słowacki Theatre. The interior is even more lovely than you can imagine, judging from its stately exterior. It is an ornate beauty, this European theater – simply spectacular.
In the morning, the clouds threatened. At times, the sun poked through, and then, suddenly, the sky would darken ominously. I fretted about rain; my daughter told me not to worry. She convinced me to brave a possible storm, and we headed to the Kazimierz district to visit some of the best cafes in Europe.

The outdoor seating in the garden at Mleczarnia was a mish-mash of wooden and metal tables. Here, the design aesthetic seems based on the idea that “we need someplace for people to sit and have a snack” rather than any philosophy regarding uniformity or the significance of color scheme or matching materials. I sat at a worn, wooden table as my daughter went to the nearby shed, and ordered us kawa (coffee) and sernick (cheesecake). As we took our first sips and bites, raindrops began to fall, fat and round, throughout the garden. We were seated beneath a tree, and we watched as the waitresses scattered throughout the garden to save the cloths on the exposed tables from getting ruined by the rain.

As we continued our walk around Kazimierz, we stopped at Cheder. In this Jewish Quarter, Cheder is one of the most authentic restaurants. The coffee, “po Izraelsku,” is strong, delicious, and not anything like what a typical American thinks of when they head for a cup of joe. Cheder offers an intimate setting, and couples and groups had already nabbed all of the tables by the time we arrived, so lingering in this lovely spot was not permissible. We headed instead to another great location, not far away.

Café Singer had some tables available for us, so we settled into our chairs on either side of an old sewing machine. The visual effect of so many sewing machines lined up at street café was charming. I’m not sure if our coffee was truly tastier at this outdoor café, or if I was simply taken with the funky idea of the place, but that morning, Café Singer quickly became one of my favorites eateries in Kraków. 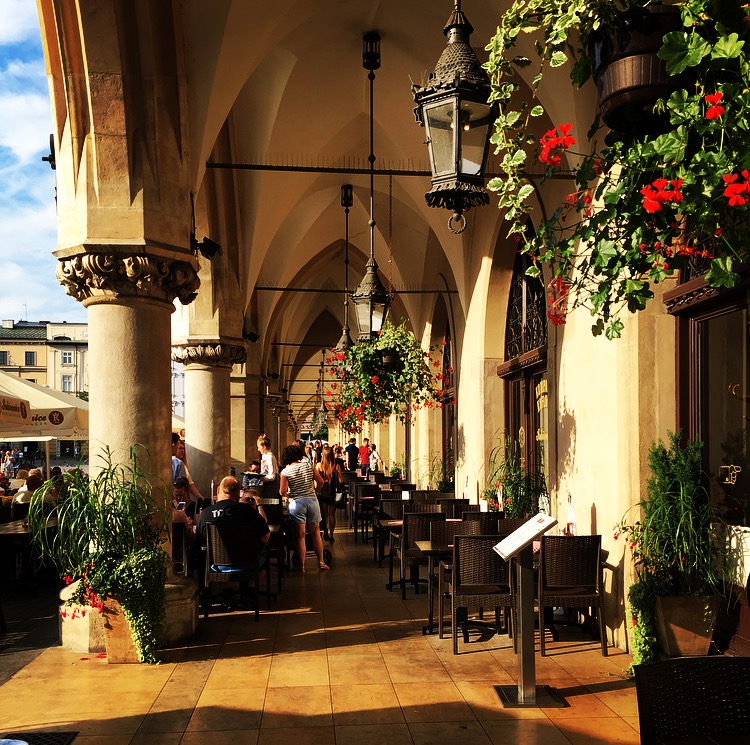 As we made our way back to the center of the city, the morning storminess gave way to oppressive humidity. While I’m usually adamant about walking all over the cities I visit, that Sunday, the thick air settling into Kraków’s Rynek began to lull us into a state of lethargy. The Rynek, or Rynek Główny, is name given to Kraków’s historic main square. There is a smaller square, the Mały Rynek, tucked away the block behind the Kościół Mariacki, but the real action is at the main square.

“Let’s go to Kopiec Kościuszko,” I said, the thought suddenly seizing me.

Kopiec Kościuszko is one the man-made mounds of Kraków that were constructed as memorials for Polish heroes.My daughter protested that the distance was too far to walk in the humidity, so I looked across the way to a taxi stand and decided to splurge. A few moments later, we were being whisked through the busy streets, away from the town center, toward the mound. Kraków has a number of mounds around the city, and while all are worth a visit, the vista from Kopiec Kościuszko is exceptional. There is a fee to gain access to the top of the mound, but it’s worth it.

On my first visit to Kraków, during the Soviet era, the mound had not yet been renovated, and there was no fee to climb the hill. We had often walked up the mound to catch cool breezes and grab an ice cream cone. One day, licking our vanilla lody, my Krakowian friend had nodded at the far distance. I followed his gaze. There, on the horizon, smoke belched out of industrial chimneys.

“Nowa Huta,” he had said, more to educate me about something unsavory rather than to point out a gem in the crown of this beautiful city. Nowa Huta was an industrial city created by Soviet planners; their goal was to create the perfect socialist society. They failed, but tourists enjoy exploring the Soviet architecture that still exists there.

My daughter and I wound our way up the serpentine walkway, a dizzying path that brought us to the very top of the mound.

We had a lot of company; this is a popular site for tourists and locals alike. The view was as far-reaching as I remembered. On this Sunday, Nowa Huta’s smokestacks were no longer polluting the horizon the way they did years ago, and we could see for miles.

After a visit to the snack shop, we walked down the shade-dappled pathway, all the way back to the main road. We made a quick right turn and found the path along the Vistula river. Boats passed by on our right, while sunbathers relaxed on our left.

The path returned us to the Rynek. Our circle complete, our second evening in Kraków began.