Go Small or Go Home: the Museum of Miniatures in Prague

What are the signs or circumstances that a child will grow up and become an artist that carves Jesus in the head of a poppy seed?

Hyper-focus? Fantastic eyesight? Spending one’s formative years in cramped quarters? Implacable nerves? And is there any overlap with those of budding surgeons? Well, I’m stumped. Whatever they are, I suspect Anatoly Konenko, the Siberian microminiaturist artist whose work appears at the Museum of Miniatures in Prague, displayed them.

With such a novel experience at hand, I kept research about the museum minimal to allow for maximum impact. All I knew was that it contained the world’s smallest book (the “Chameleon Story” by Anton Chekhov) and that Konenko “shod a flea” (?!?). So, tantalized, by the time I got there I was chomping at the teeny-weeny bit – only to find a large tour group, the bane of solo travelers everywhere, had swarmed in before my arrival. I imagined their hunched squintings over the microscopes was somehow gobbling up Konenko’s works and leaving less for me to see. I blame jet lag and eye-greed.

Well, I got my turn. And what a smorgasbord it was: the Lord’s Prayer on a single human hair, a three-dimensional 1/10th of an inch carving of the Eiffel Tower, animals gamboling on a mosquito leg, and Matisse’s “The Dance” reproduced on a sliver of mammoth bone (mammoth bone!—clever, sardonic Konenko). As I regarded one of my favorites, ten camels carved in the head of a needle, I gave a “take that, billionaires” chuckle although I don’t believe any such persons were present to feel the sting. You know you’ve made it, BTW, when someone carves your image on a grain of rice. 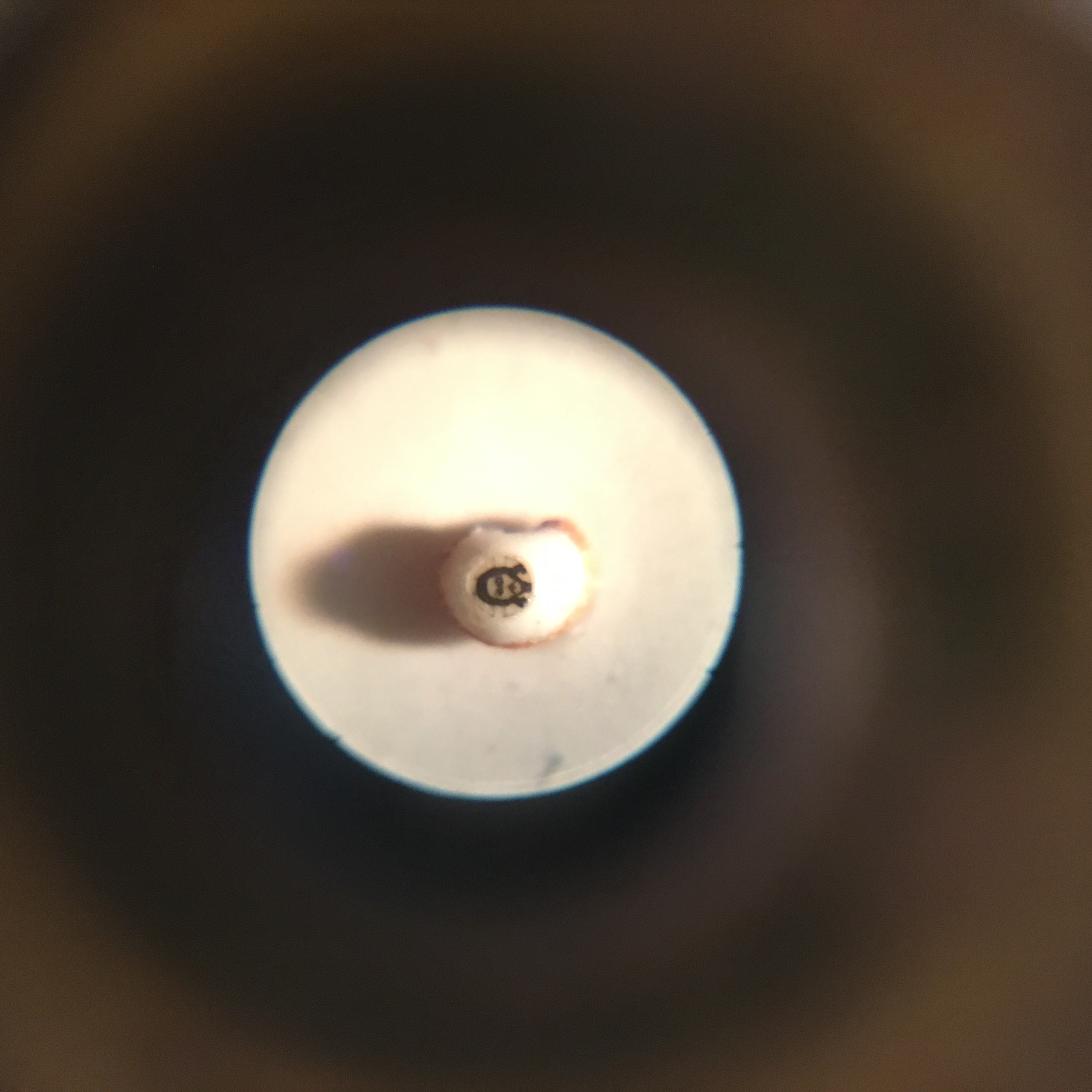 I experienced Konenko’s works first as marvels of motor coordination, determination, patience, devotion, and extremely specified compulsion, and secondly as art objects. Of course, the two are inextricable here. A painting that has a simple composition or appears careless in the execution could be something an artist labored over for years. It can be hard to tell. But you know these pieces weren’t bombed out in an afternoon. Until recently it would be hard to even cheat in their production with fancy microlasers or suchlike. This stuff is hardcore. Extreme, you might even say, and a form of daredevilry.

As adventurers and professional stuntmen hurdle themselves into the big wide world, microminiaturists plunge themselves into the tiny. The resulting WOW factor is just from the other side of the continuum. There’s a parallel inclination to a self-appointed and ever-escalating challenge. Climb Kilimanjaro? Done. How about Denali? Check. Mt. Everest? Rightio. Now, how about Everest sans supplemental oxygen (what were you thinking Reinhold Messner?). Similarly, can you get a portrait of your mother on a button? How about a grain of rice? A sesame seed?

Life and limb may not be as imminently at stake when shodding fleas as it is with solo ventures across the Australian desert or tightwire walks between skyscrapers.

The dangers I see (besides horrible neck and hand cramps and angry, neglected families) lay in psychotic-break levels of frustration. How easy for a tremor to deliver a catastrophic blow to a work with five years invested in it. And what do you do if a breeze sweeps in and blows your inscribed hair strand onto the floor? Video games simulate jumping out of burning 747s but imagine using your Xbox to craft the Taj Mahal on the back of plankton or what have you. That, I would play. 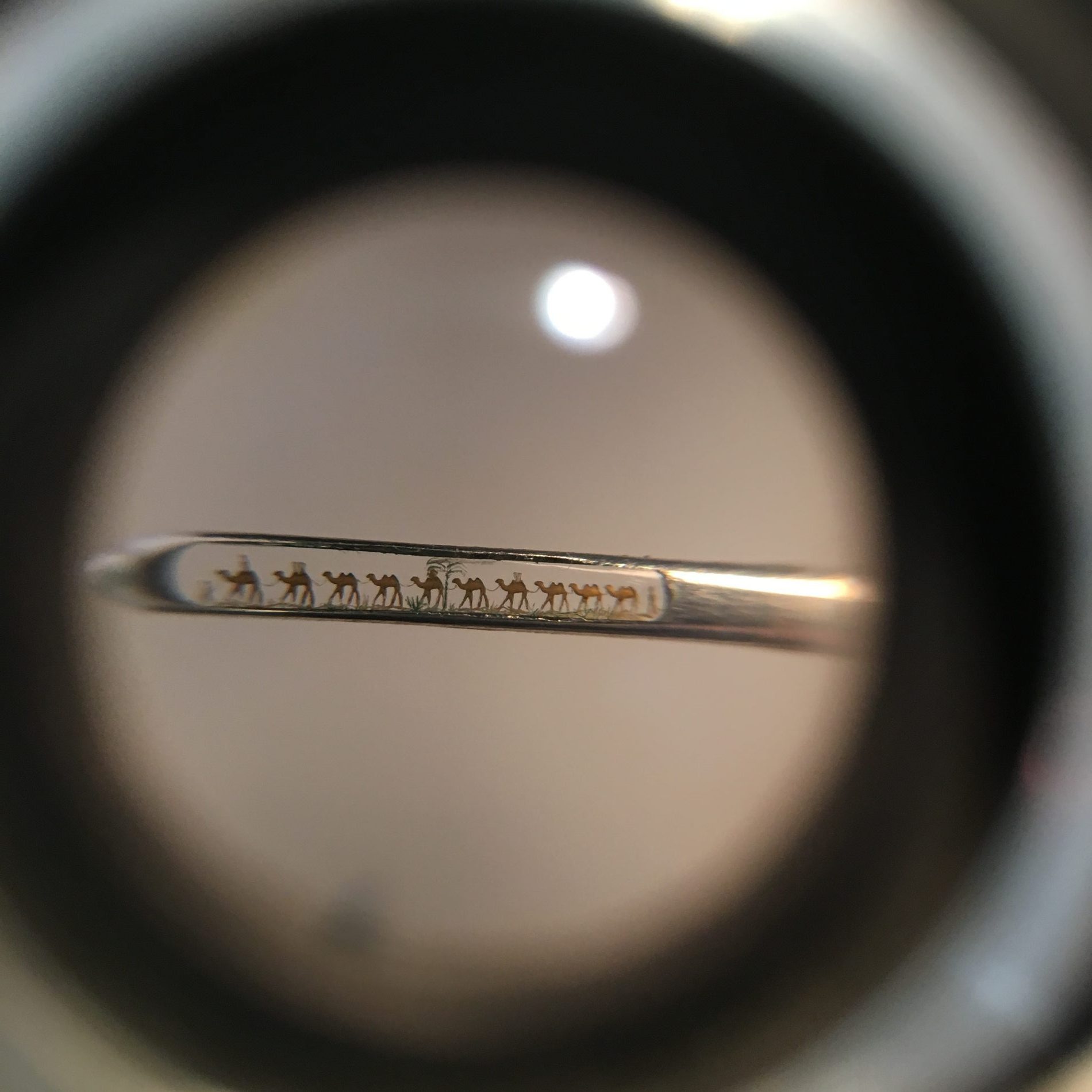 Somehow, I was surprised to read Mr. Konenko is not only alive but, being only sixty-four, didn’t have a bigger foot in the previous century.

Who among us could embrace such long-game Augean undertakings after the advent of TV n’ sofa, not to mention ye olde internet. These works are so difficult, I considered what could be performance-enhancers for the aspiring Lance Armstrongs of the microminiaturist world. ‘Roids and rhEPO do not strike me as useful. Speed or coke, while improving focus, could bring about startles. Quaaludes might slow down your pulse, a big plus, as microminiaturists have to wait in between heartbeats to make incisions to lessen the hand tremors, but could be ruinous to motivation. A shot of whiskey could help ameliorate nerviness, but anything more strikes me as potentially fatal to the object. Perhaps getting high would not be a bad idea. With a little Ativan. And Ritalin. Diazepam?

I’d be interested to know if there have ever been microminiaturists who undertake this handiwork without chronicling it or ever even telling anyone they are doing it in the first place.

The idea of St. Paul the Baptist carved into an almond sliver in secret and sent into the world on the back of a strudel could serve as a prayer, a message in a bottle to the universe, or perhaps an extreme expression of privacy.

If this goes against the showboat nature of many daredevils, it does happen. Jeff Clark did surf the very, very big waves of Mavericks alone for 15 years. 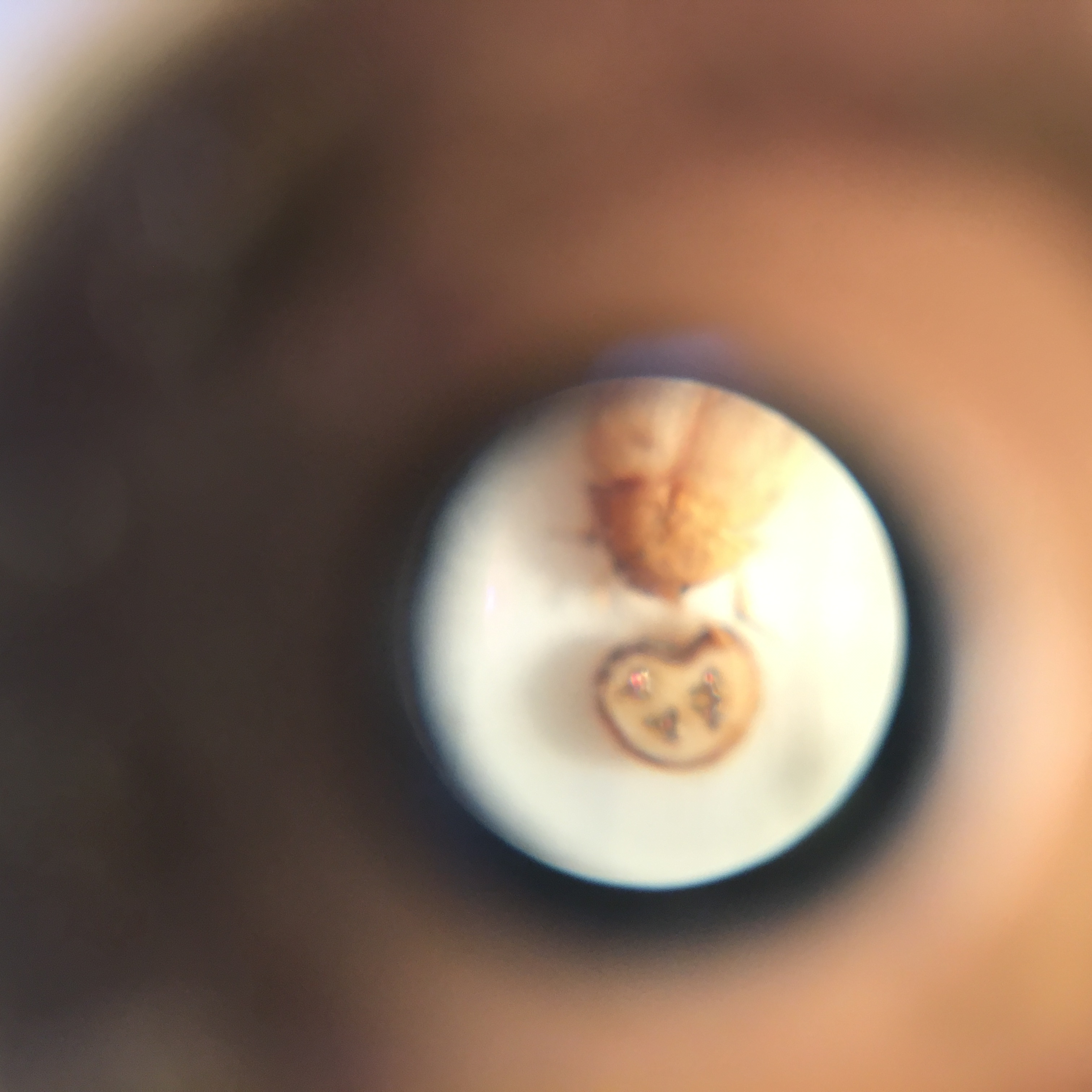 Well, I’m very glad Konenko did take steps so others might see his work. Everything about this undertaking pleased me.

One can never have too many marvels. Using the quotidian (fleas, hairs, pins, etc.) as both material and context for these marvels is pretty magical. And it received my hearty endorsement as exactly the sort of thing humans should be spending more time doing: diving into personal interests whether friends and family find them mystifying or not. Good lord, we need to be kept out of trouble.

All of this is about ratio, and Konenko’s work seems as accurate a demonstration as I’ve seen of the ratio of open person’s voice in the world.

The proportions strike me as on (needle) point. How infinitely small we are, all of us but poppy seeds among billions of poppy seeds of past, present, and future, but, for that, how much we can say. And, does Anatoly Konenko make his own tiny voice count.