Golden Idol and Bloody Sacrifice above the Himalayan Clouds

The jeep I was sitting in tore its way through the muddy mountain roads somewhere in Nepal, a misty chasm plummeting down one side and a barren slope rising on the other.

I had no idea where the hell they were taking me.

Some people like to plan ahead. They have it all set in advance – the plans are made, the routes are chosen, the tickets and stays are booked. I’m not one of these people. The path I tread unwinds before me naturally. The step I’m on is always caused by the previous step and will influence the next. At least, this is what I tell myself to justify the lack of research, which often gets me into unexpected and unlikely situations that I prefer to call “adventures”.

This story takes place in Nepal in March 2017, when I was traversing the boundless continent of Asia.

Having entered the country through the eastern border with India, I was exploring the regions most known for their tea, where highest mountains tear through the clouds that cover up the ravines below their snowy caps. 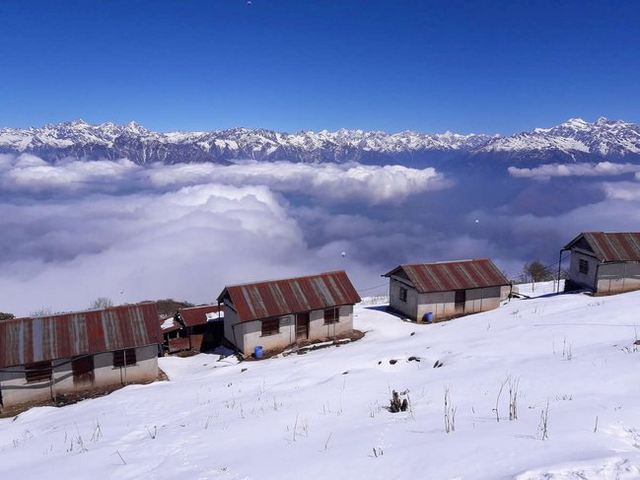 Like most visitors to Nepal, I had a strong desire to see the highest mountain on this planet, Everest, but no desire whatsoever to waste money on a plane to the base camp. I asked around to see if there were more accessible spots from which the mountain can be seen. Apparently, there are, and the one I considered to be the closest was called Pathibhara. Knowing the Nepalese roads, I estimated the time needed to get there to be around 14 hours away from the town I’ve been in the moment, Taplejung. I asked for a way to Pathibhara at the local bus station and they had a transport going there in the early morning of the next day. Not thinking twice, I bought the ticket, never knowing the adventure that awaited me.

The next morning at about 4 AM, I left the hotel and boarded the jeep with local people and a lamb. Livestock can be expected to show up anywhere in this part of the world, so I didn’t pay much attention to the lamb as it didn’t make any trouble except bleating loudly when scared. With all the passengers on board, the car started off and immediately went in a different direction than I’d expected. But this is also common, so it didn’t ruffle me either. 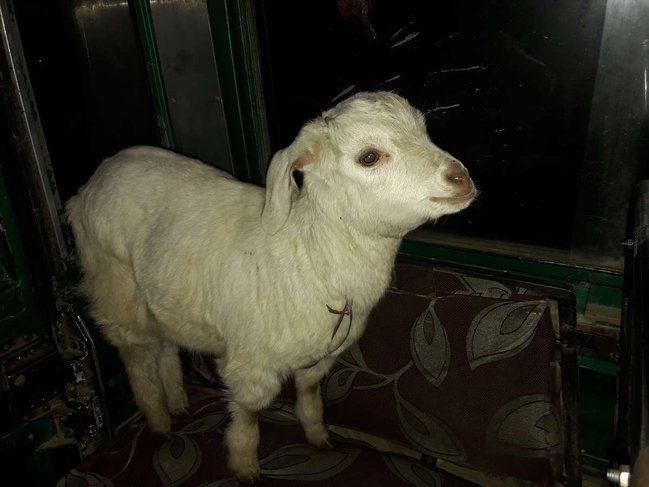 Before we get any further, I’ll describe what public transportation between cities in Nepal looks like. It’s either taking a 4WD off-road vehicle or maybe a bus if the road is paved. The distances are not huge, but windy, narrow, and often damaged roads make it a long and gut-wrenching ride. To add insult to injury, Nepalese people seem to have weak stomachs, so the sides of both buses and jeeps are often covered with vomit that just keeps on coming. Traffic jams happen in the middle of nowhere due to the road being damaged or a bridge that is too narrow. These can last for up to 6 hours and beyond.

As the car pressed on, the going was getting rougher – the pavement ended when the town did. Luckily, this particular ride was only about 4 or 5 hours total, including the times when the car was stuck in the mud. The jeep was old – these vehicles have been in operation since WWII. The interior is rather minimalistic and the comfort of the passengers is clearly not a priority. Glass and metal, no plastic at all. The only soft things there are the seats and the passengers. As the car was thrashing, drifting and shaking violently all the way, the softest of the passengers vomited in the windows and were scared out of their minds. They even refused to leave the car when it was bogged down in the wet clay of the road and I beckoned them to get out so the others could push it on.

…we were clearly not at the Pathibhara I was looking for.

By the time the vehicle came to a stop on a hill cloaked by the clouds, I knew that we were clearly not at the Pathibhara I was looking for. A brief investigation revealed that we had arrived at a hamlet in the foothills of a mountain where Pathibhara Devi Temple stands. Pathibhara is a Goddess in Hinduism and this particular temple bearing Her name turned out to be an important place of pilgrimage. And I was the only clueless person in the car, the rest of the passengers were heading there with that purpose in mind. Even the lamb was promptly bound and taken away. I was a little upset and initially wanted to turn back, but the return was scheduled for the evening. With nothing better to do, I dropped my backpack at a local store and went after the pilgrims. 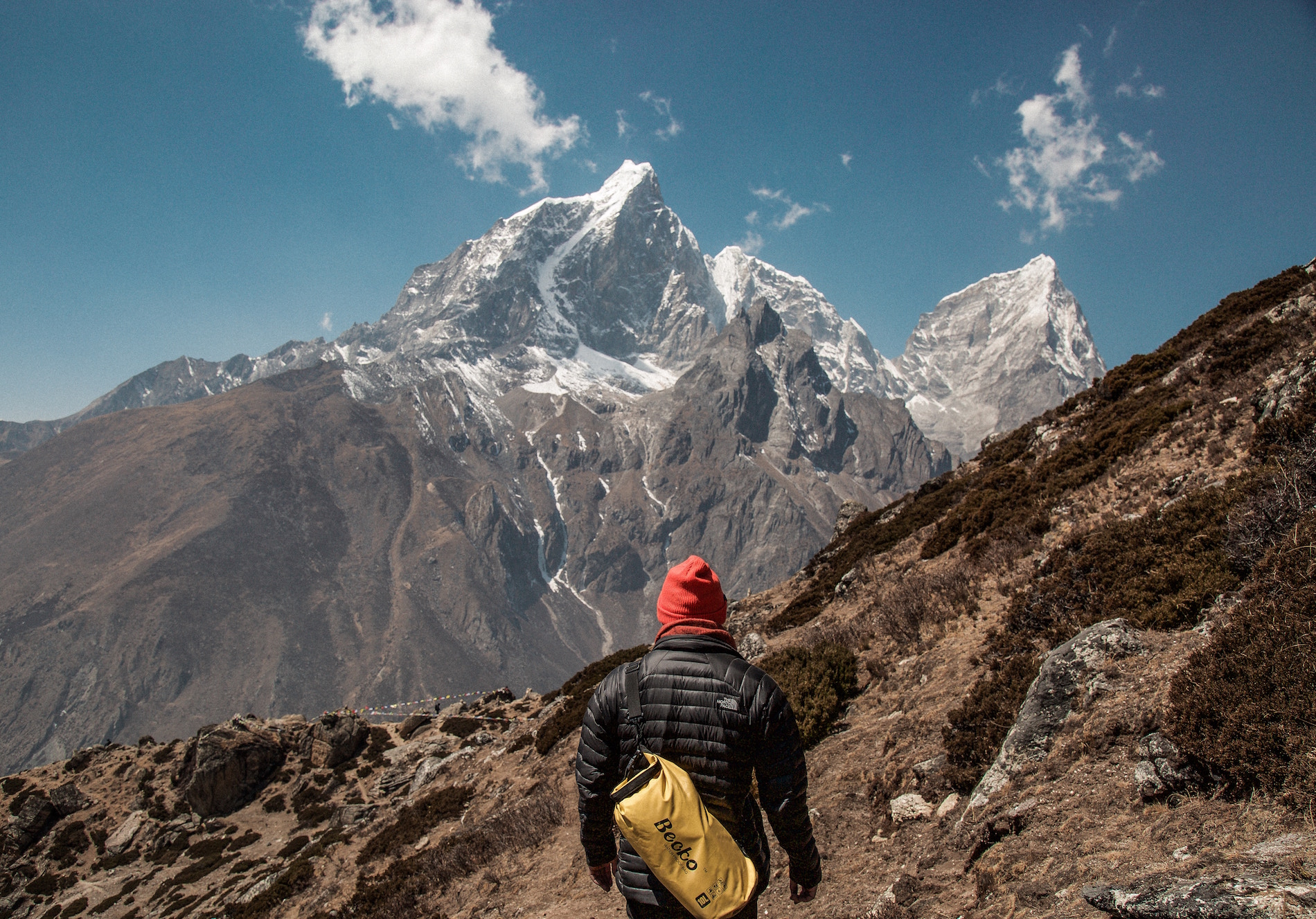 Photo by Christopher Burns on Unsplash

The Temple is located at a considerable altitude of almost 3800 meters and the road ends about 1 km below, so the pilgrimage promised to be long and exhausting. And so it was, without proper rest and nutrition in the last 24 hours I soon ran out of energy and had to buy some popcorn and spicy tea, stopping in one of the tiny settlements on the way up. After that, it was easier to ascend the seemingly endless stone-paved stairway and in no time I made it out of the clouds and was amazed by the enormity of the stone massifs surrounding me, jutting out of the white ocean below into the vast blue void above.

At that point, I started to meet the descending Hindu pilgrims. Among them, an old woman who fed me a slice of ginger and smeared my face with some powder. Something to help the skin withstand the altitude and cold, I guess.

The summit wasn’t far away.

It is a spectacular place. Never have I seen so many tridents, bells, and colorful prayer flags. Thousands of these items are brought here by devotees, along with other offerings… speaking of which, what had become of the lamb? I arrived just in time to see it dragged by the leash to a red-smeared area to one side. Indeed, the poor creature wasn’t transported to a neighbor village, from the start it was only a sacrifice to the Goddess. They made a quick work of it, beheading it and placing the sacrificial lamb’s head among many other things like money, food, and water at the feet of an ominous statue of the Goddess, gilded and covered with blood-red paint.

By pure chance, I made friends of some Nepalese guys and I joined them. We went back down the slope to the village to pick up my luggage and then walked a few kilometers more to the place where they parked their car.

Having returned to Taplejung, we went to a local café to get some food and to drink Rakshi, a traditional alcoholic beverage in Nepal and Tibet. It was a great way to conclude the unexpected adventure.

All in all, nothing that day went as planned. And I damn glad of it; it was the best mistake of my life so far.