How I Didn’t Hike the Pico del Teide

One autumn day when it was evident that the summer was definitely over, I remembered the promise I’d made myself last winter: instead of going skiing this year, I wanted to escape the cold and visit a warm, sunny place. So, I checked all the available options and found Tenerife, one of the Canary Islands, situated in the Atlantic Ocean.

The weather looked promising – travel guides guaranteed spring temperatures throughout the year. As I’m still a university student, I had only three available weeks to choose from for this trip. I expected to go with my boyfriend, as usual, but he couldn’t take a week off. This left me with two options – to stay at home or to go by myself. After giving it some thought, I decided on the latter, feeling like a traveler experienced enough to be able to do it alone. My university workload was also heavier than usual, another factor which helped me to decide on going. I knew I would need a break to clear my head before getting into it again. This realization silenced the last of my doubts.

Although I’ve traveled by myself many times, I’d never been to such a distant place alone.

For this reason, I spent months before my departure carefully planning. I had to leave a detailed itinerary to my parents, who were terrified and tried to stop me more than once. But my decision had been made.

At the beginning of my planning phase, I thought I was going to Tenerife to sunbathe and read. But as I gathered new information about the island, I realized that not to explore it would be such a waste. And then I read about the Pico del Teide!

With an impressive height of 12.198 ft (3,718m), this volcano is the highest mountain in Spain, located in the Teide National Park. I immediately knew I had to hike to the top. 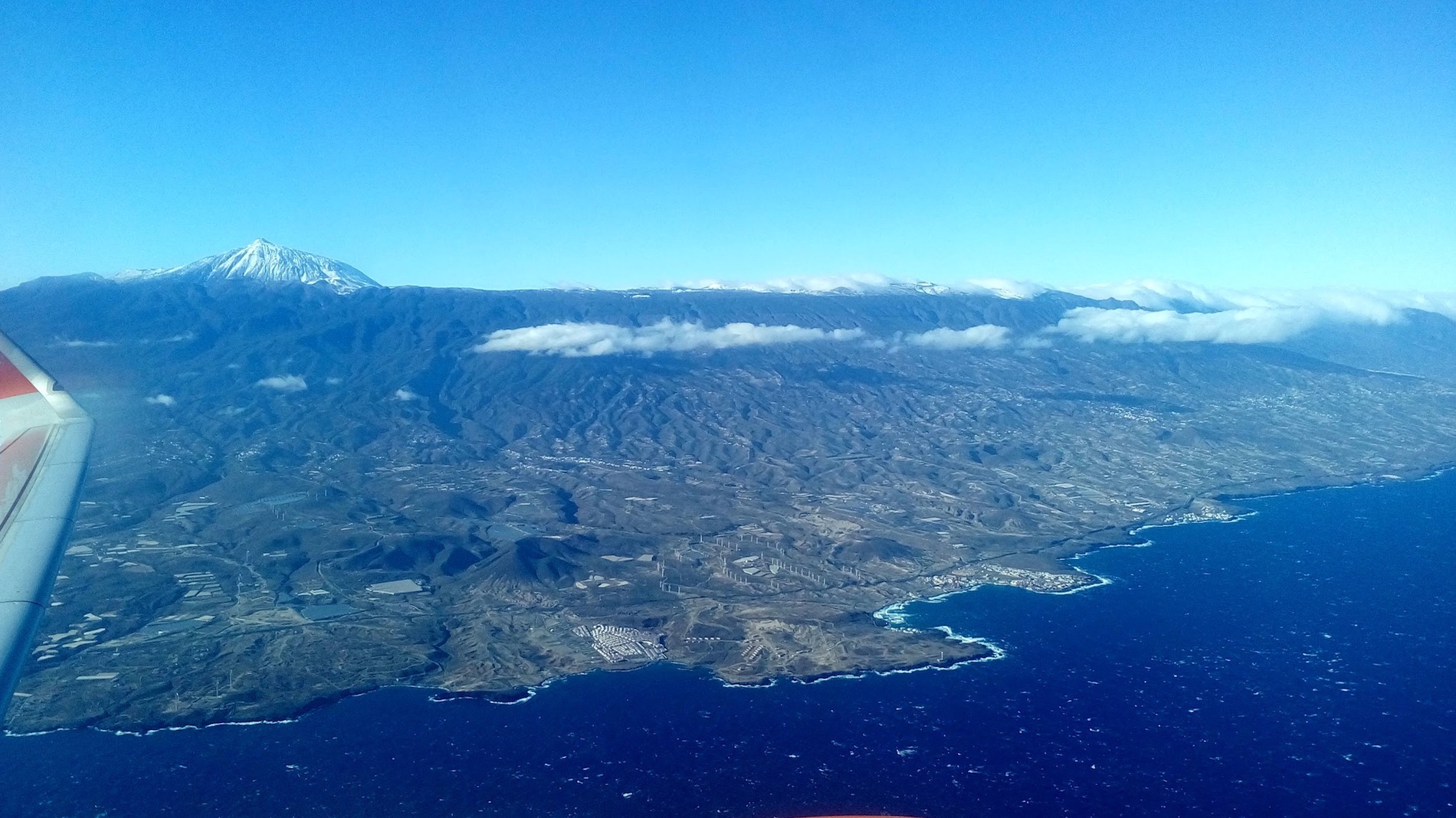 However, to reach the peak, an access permit is essential. Travelers need this permit for the last part of the trek – from La Rambleta (the end station of the cable car) to the top. The validity of the permit is limited to two hours during a particular day, and it has to be obtained in advance. The cable car has to be booked in advance too, as its capacity is limited.

The last step was to plan my accommodation – I booked a hotel with half board near the bus station in Puerto de la Cruz. The reviews for the hotel varied, but the food was praised. When I look back, I think it was a good choice, as the room was spacious, clean and except for slightly dated furnishing, there was nothing to complain about.

After doing all of these necessary steps, I couldn’t wait for the beginning of my adventure.

I flew from Berlin Schoenefeld. The flight to the Aeropuerto de Tenerife Sur took about five hours. On disembarking, I was welcomed by warm sunshine and intensely strong wind.

From the airport, I needed to travel to Puerto de la Cruz. I opted for a bus, which was delayed, and when it finally arrived, it was full of people. As it slowly approached, I grew a bit nervous that there wouldn’t be any seats left and I might be forced to stand for the whole journey. But my fear turned out to be unfounded.

When I was getting on the bus, there were only about six free seats randomly located throughout the bus, although a long queue of tourists still waited at the front of the bus, eager to get in. To my utter horror, the driver walked through the bus once the last seat was taken, making sure there were no additional seats, and then he closed the doors and drove away, leaving the crowd of tourists staring behind the bus in disbelief.

Nevertheless, aside from this experience, I have to praise the bus services on the Tenerife island highly. I used it many times during my stay, and it was reliable, very comfortable (the buses are new, and all have air conditioning) and it runs relatively frequently. Only, of course, when I managed to get in. 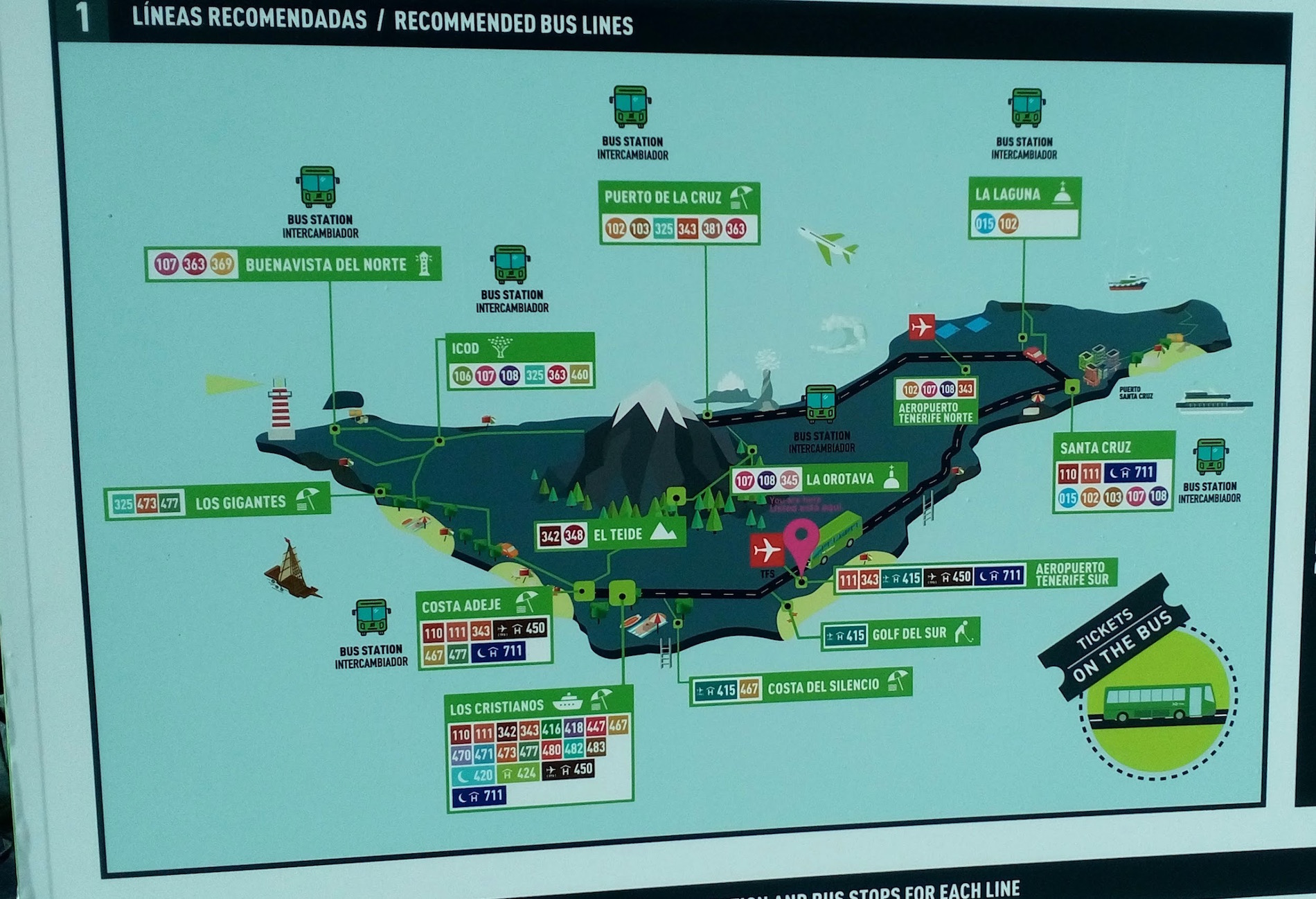 The bus ticket can be purchased directly from the driver, but if you plan to travel often, it’s cheaper to buy a travel card. This is a prepaid card (the options were 15 or 25 euros), and you can save money by using it. For example, I paid 10 euros instead of 14.5 euros from the Aeropuerto de Tenerife Sur to Puerto de la Cruz (90km), saving almost 5 euros!

The bus ride from the airport took about 90 minutes during which time I witnessed an incredible change in the landscape. The part of the island I had landed in was arid, desert-like, and vegetated only with occasional shrubs. However, as the bus approached Santa Cruz de Tenerife – the capital of the island – the vista began to transform, presenting an entirely different landscape in my final destination. Alighting from the bus in Puerto de la Cruz, a light shower of rain welcomed me and colorful flowers and green trees surrounded me. It was wonderful.

It took me a few moments to digest the scenery, but then I suddenly felt a pang of disappointment. I realized that greenery always goes hand in hand with the weather and despite being a lover of nature, this place was not what I had expected.

The problem was that when booking the accommodation, I took into consideration only the access to the Teide National Park. From this point of view, Puerto was a perfect choice. But as far as the weather was concerned, this city was not so hot.

I later learned from a chatty man in a souvenir shop that especially during the winter months, there is a significant difference in the climate between the south and north. This distinction is a result of the direction of the wind and the high mountains. The wind blows clouds from the sea inland and due to the high mountains, the clouds get stuck in the middle. They build one over another until rain comes down, starting the process again.

During the first two days the weather was not bad and, except for occasional showers, I was able to explore the city happily. But in the afternoon of the day before the big adventure, I was informed by the cable car company that due to bad weather in the national park, all trips were canceled for the next couple of days. I couldn’t believe it! This was such a disappointment! Although I tried to prepare for everything, this took me by surprise.

There was nothing I could say or do to console myself. Even if the weather improved, the access permit to the national park would no longer be valid. The adventure was over; my parents could relax.

As the weather was the same the following day and there was not much else I wanted to do in Puerto apart from visiting the Loro Parque, I decided to go to the allegedly sunnier part of the island – Costa Adeje.

A Change of Plans: Costa Adeje

The trouble with this island is that although at first glance on a map Costa Adeje doesn’t seem to be far away, in reality, the journey takes about two hours. It is because high mountains separate these two regions and to get to Costa Adeje from Puerto the bus has to go almost around the whole island.

Even before reaching the destination it was apparent that the weather there would be much better. Although the heavy clouds were still visible, they were now behind me and seemed stuck in the middle of the island.

Costa Adeje is a long stretch of sandy coastline with many playas (beaches) following one another. The coast is lined by a promenade, giving active tourists the opportunity to visit more than one beach. I enjoyed the day there very much, finally able to soak in the sun. From time to time the feeling of distress from the unrealized trip crept on me again, but I decided to wash it down with mojitos in one of the beach bars. On the wall of this particular establishment, they were advertising, “the best mojitos on the island.” Although I’m not in a position to know for sure, I think the advertisement didn’t lie. 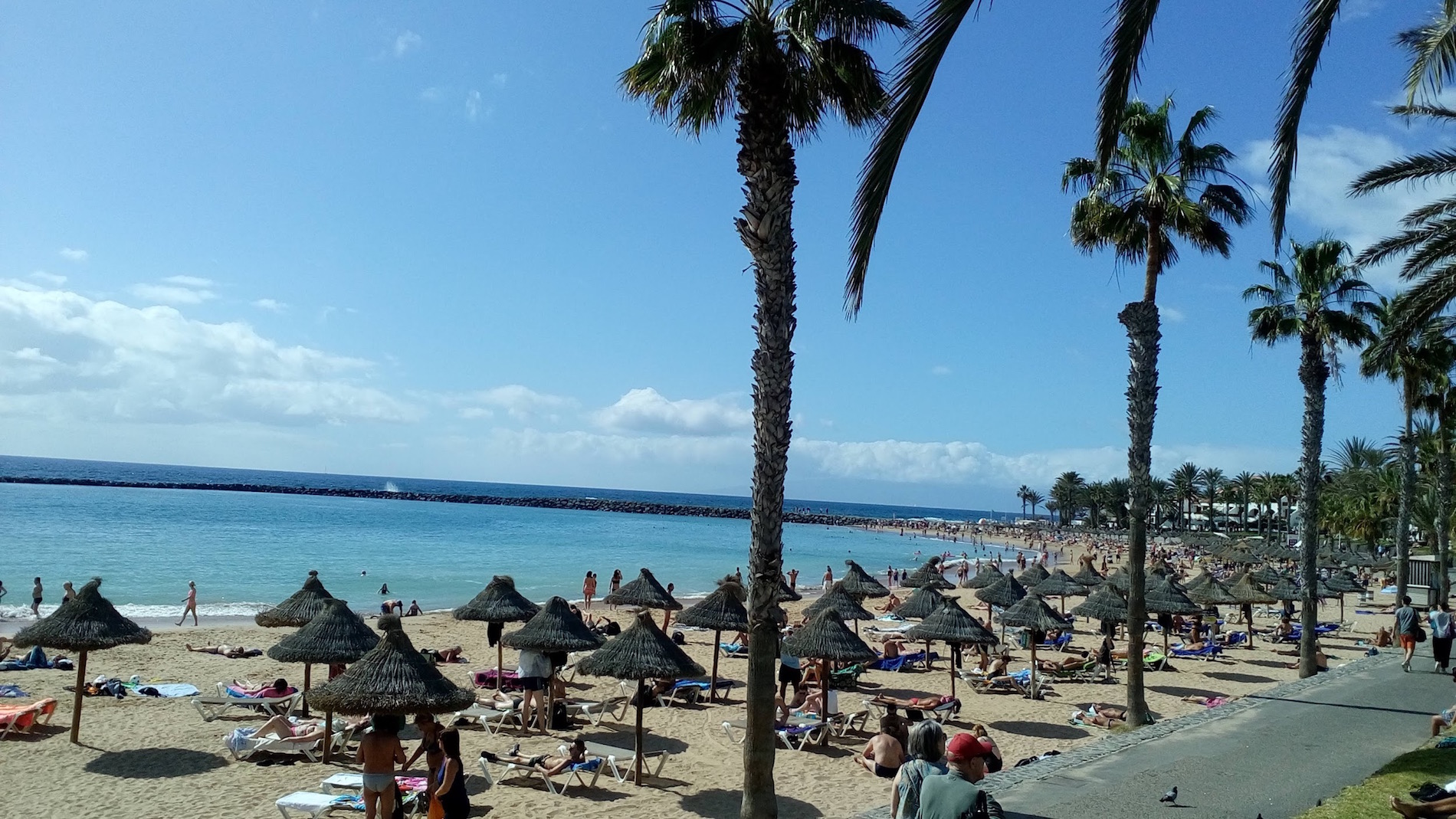 I spent the next two days walking around the cost of Costa Adeje, but before leaving the island, I wanted to complete my circle tour around the island. To do this, I had to try the route from Puerto de la Cruz to Los Gigantes.

Los Gigantes is a town named after Acantilados de Los Gigantes – cliffs rising from the sea. The cliffs are up to 500 meters high and a popular tourist attraction. Although I managed the trip without a paper bag, I would only recommend this road to people with cast-iron stomachs. It’s a journey of about an hour, full of ascents, descents, and turns, and although I’m convinced that my stomach can manage anything, I spent the last twenty minutes praying for the trip to be finally over. I wasn’t the only one. Still, it was worth it. With heavy cloud coverage in the background, the cliffs made for an awe-inspiring photo moment.

I feel proud of myself for not letting anyone discourage me. I learned a lot, not only about the island, but also about myself.

Although I’ve been back home for a few months now, I still have a smile on my face whenever my mind wanders to that adventure again. I feel proud of myself for not letting anyone discourage me. I learned a lot, not only about the island, but also about myself, and enjoyed the stay on the isle tremendously. The disappointment about the unsuccessful trip to the Pico del Teide has faded, and I can look on the bright side – now I have a reason to return to the island again.

Where to find information, if…