La Canicule: A Portrait of Travel in Provence

July mornings arrive in Provence like a gentle pouring of milk into a black cup of coffee. The nocturnal meanderings of feral cats and sanglier acquiesce to shaded rest in the brambles and underbrush. Spiders, scorpions, and small lizards man their stations in anticipation of the diurnal insect menagerie which will soon come to life. Day bugs and night bugs: a changing of the guard ceremoniously observed.

An hour after sunrise, the heat has settled like a weighted blanket on the recently cool landscape.

The sun rises from a mountainous horizon into a cloudless blue sky to begin granting its favors to the grape, sunflower, olive, and lavender which grow in such abundance here. 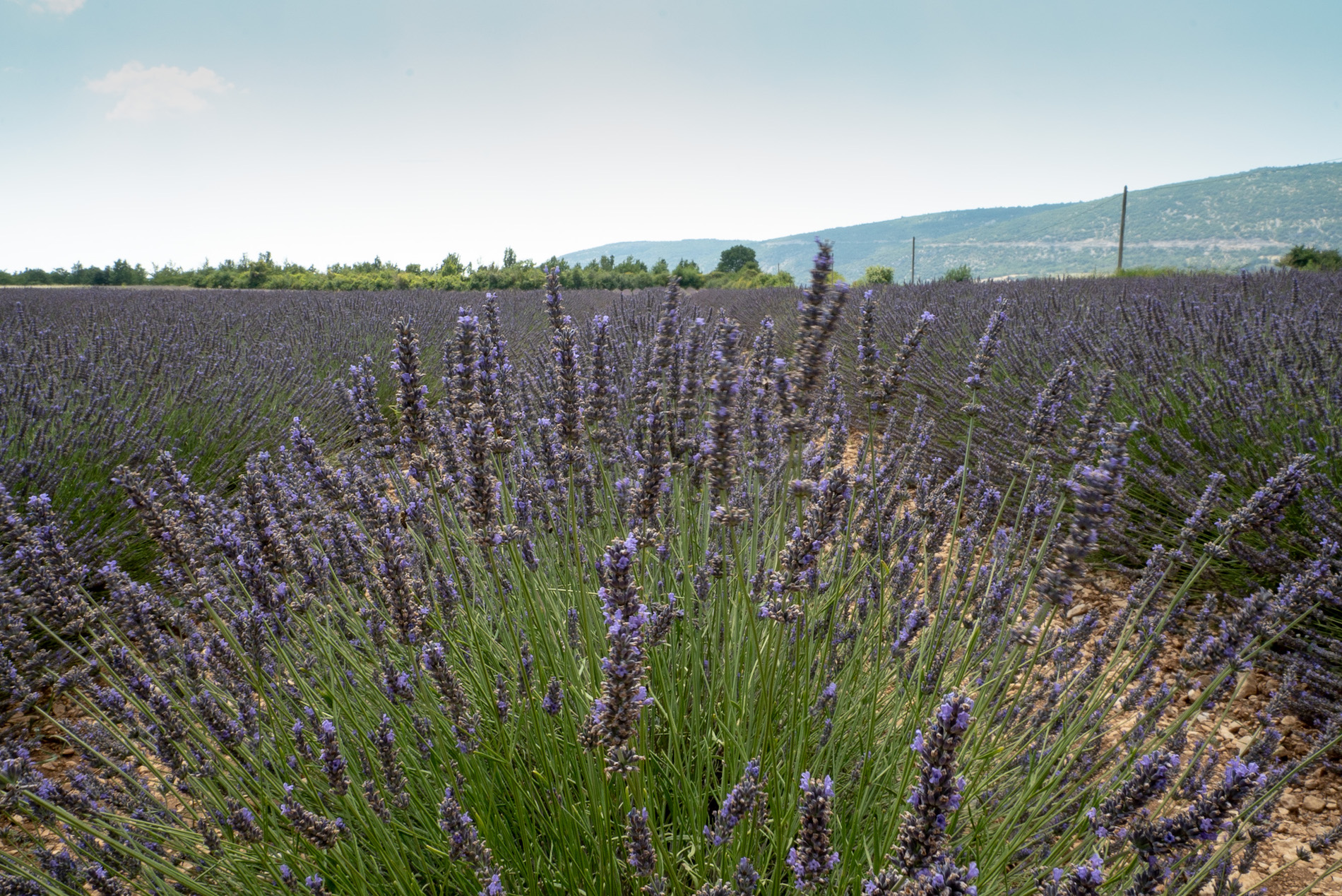 Over tall lilac hedgerows you hear the first stirrings of people: an early garbage truck followed perhaps by a couple talking loudly on a morning walk, and the excited commotion of young children eager to resume their activity in a nearby swimming pool.

Before long, the tourists and cyclists will take ownership of a vast web of narrow roads that twist and turn through Le Luberon. Provence’s white stony mountains and canyons effortlessly repel the unnatural conformity and order of straight roads.

Europe is in the middle of a heat wave, what the French call la canicule, with daily high temperatures approaching 40 degrees Celsius. 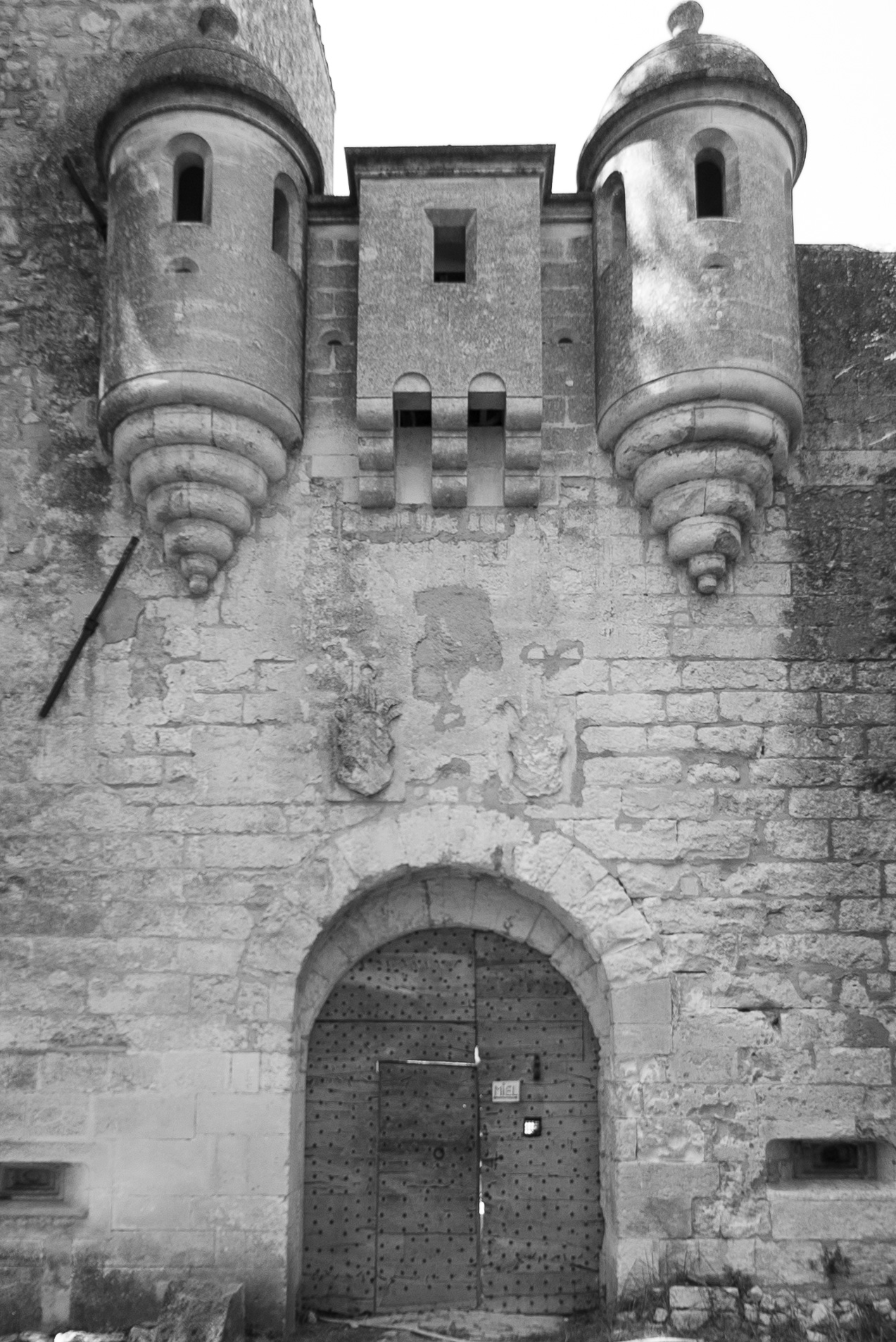 Days here appear long, not simply the result of summer’s solar cycle, but also measured in activity and accomplishment. The heat will not impede the progress. Tourists tour, growers grow, market vendors sell, and lives are gratefully lived.

The discomforts that accompany a traveler here are held in abeyance, postponed from awareness as the day unfolds. Sore feet, sweat-crusted clothes, bite-covered bodies, and sunburned skin all fade from notice over a breakfast of tartine and fresh fruit. Acknowledgment of your ailments is a task left to the solitude of night, and the glory of another Provençal day enforces this with all its power of distraction.

Eating is all important here.

Taking nourishment may be a biological necessity, but it’s never acknowledged in such base terms. Food is a source of pleasure first and foremost, and those who labor in the hot sun to produce and sell various comestibles greet you with an enthusiasm for their trade wholly unfamiliar to an American seller of breakfast cereal or energy drinks.

To walk through the Wednesday market in Sault is to be engaged fully in the sights, scents, sounds, and tastes of Provençal life.

American hipsters might call these people “foodies,” but that designation misunderstands entirely the rich calculus of the French people and their food. Here, it is impossible to distinguish foodies from non-foodies; everyone simply shares in the vast pleasure of an ancient, endless buffet. 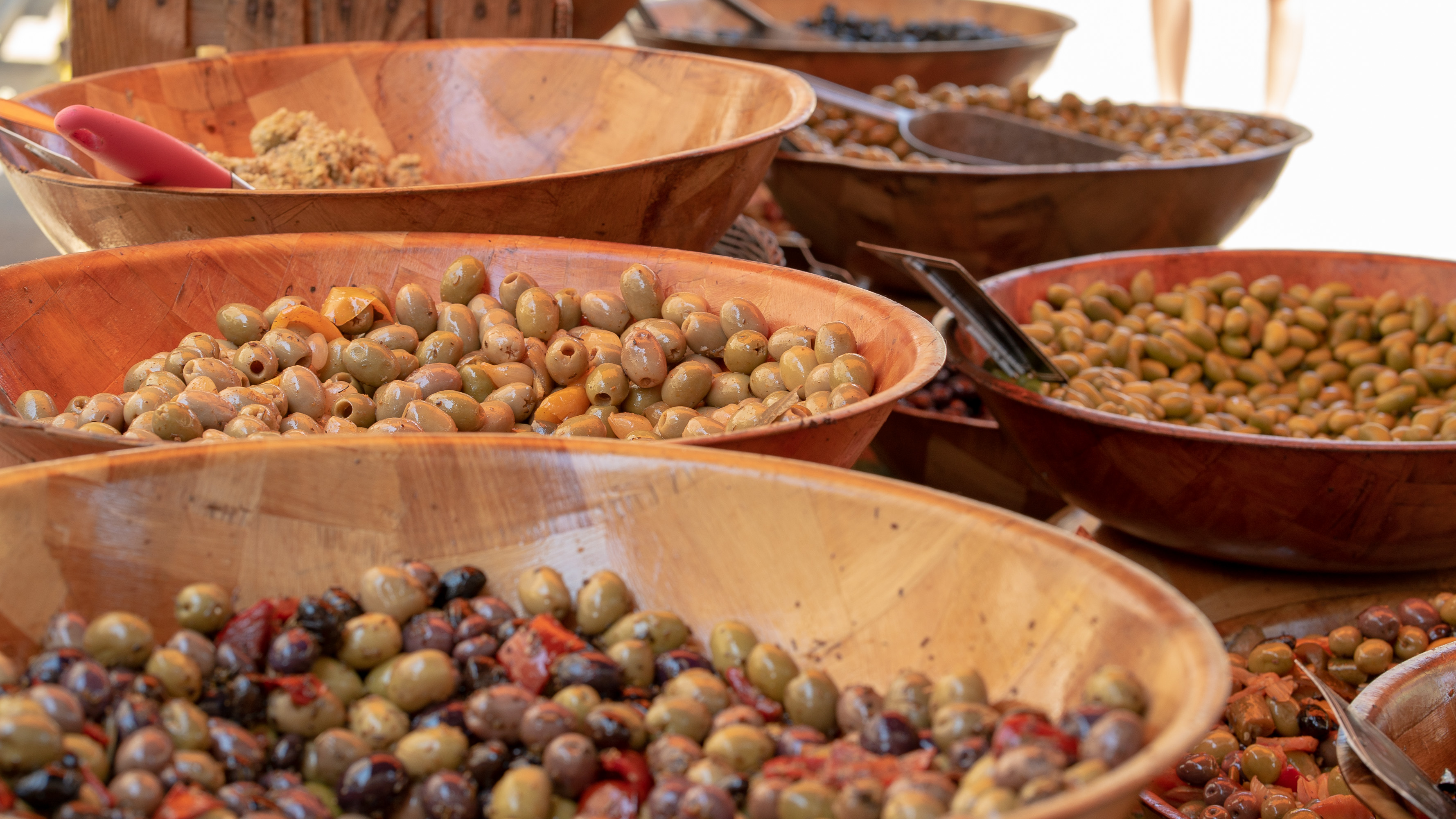 Strolling from stall to stall, one feels a grateful distance from American-style grocery stores with their over-priced and over-packaged items.

The market is packed with table after table weighted with an abounding variety of local cheeses, charcuterie, wine, olives, and sweet nougat. When vendors ask if there’s anything you would like to try, you might politely state, “I’m just looking,” to which they respond with a cheerful grin, “You can look with your mouth, yes?” and a selection of samples appears under your nose on a cutting board.

The speed of your walk slows to a near crawl to afford more comfortable transition: from the rich, calming scent of dried lavender, then the pungent and inviting aroma of goat cheese, dried pork sausage with fennel, olives marinated in vinegar and herbs, and the sweet fragrance of fresh cut flowers. A woman casually stirs a huge batch of Paella which sends out inviting aromas of shellfish, chicken, and saffron. The abundance awakens senses long held dormant by processed cheese and freezer-aisle dinners at home.

The afternoon is marked less by the clock, and more by hunger and the heat-induced languidity which arrives in the middle of the day.

The markets gradually empty and the cafés and brasseries fill. Cold beer and cigarettes appear, followed by plates of food and comfortable conversation. In the little towns of Provence, this activity proceeds in gentle waves until the dinner crowd arrives. 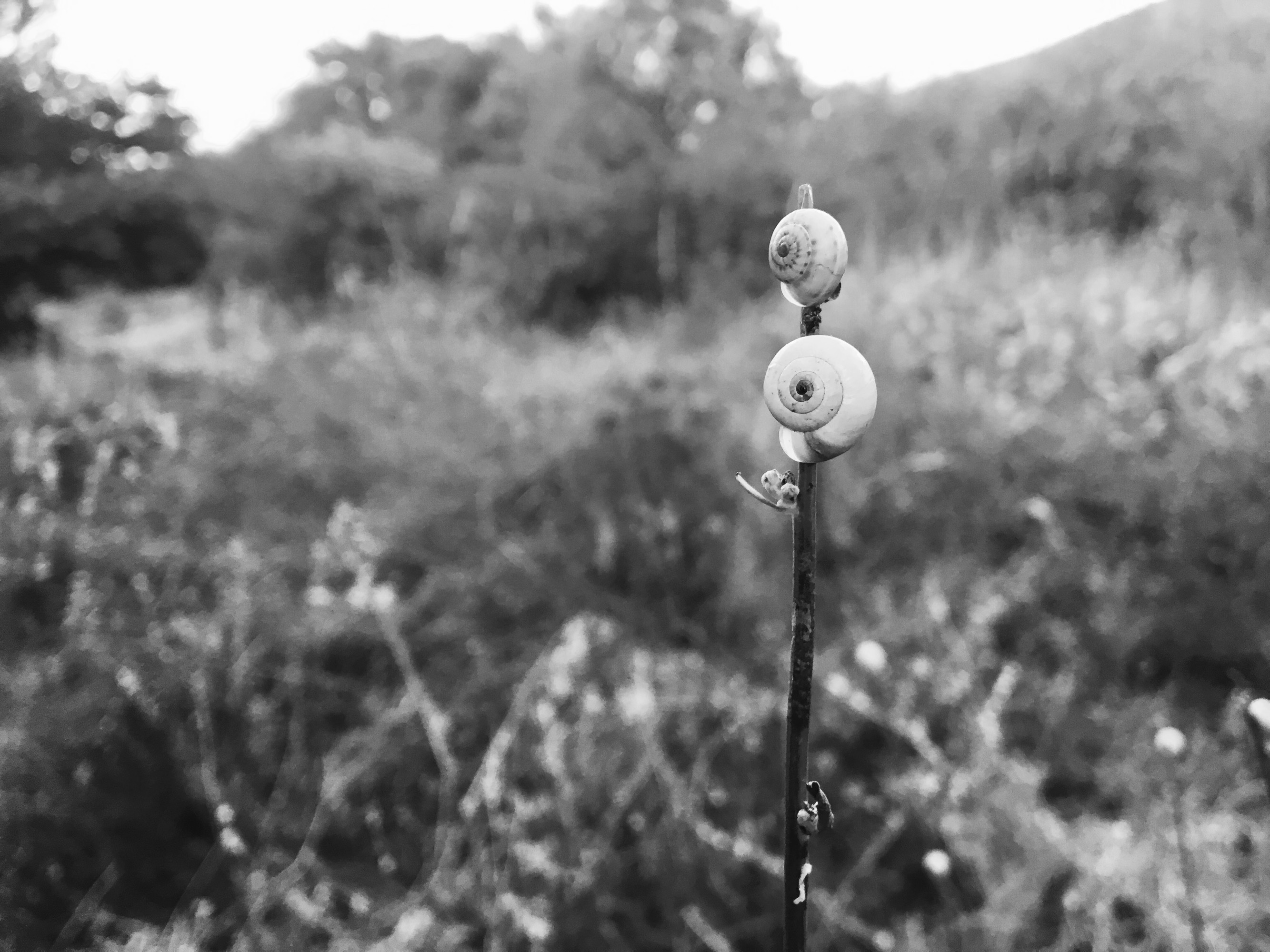 Dinner is the most formal meal of the day, even when the food served is no more complicated than at breakfast or lunch. Dinner is slower and more structured. When taken at a sidewalk café, expect the servers to promptly arrive and ask if you want something to drink, but then assume a greatly reduced pace until you’ve eaten and drank and sat and conversed and observed, and – if you’re an American at least – grown a bit uncomfortable at how long your meal has taken.

The last ordeal of the ceremony is to get your server’s attention and ask for the check with as polite and unflustered a tone as you can manage: “Pardon, monsieur, l’addition, s’il-vous-plait.” And you are soon released, not just from the confines of the table and the imprisonment of an unpaid tab, but from the cares and activities of another day spent in the Vaucluse.

With a full stomach and head lightened by local wine, you enjoy another amiable Provençal evening.

You walk the narrow streets past locals returning home from work and try not to blend in with the groups of foreign tourists who (you tell yourself) stand out like a sore thumb: Germans, Dutch, and Swedes, but mostly Americans and Brits. In Provence, these strangers are your clan, no matter how much you’d like to dream otherwise.

The sun is now dancing like a ballerina above the stage of the western horizon.

As she moves, her colors and intensity transform her ferocious character. Ever so slowly, her voice becomes soft and her colors shift from yellow to orange to red. The radiant-heat contortions of the atmosphere distort her form, making her look wider and flatter as she settles into the cradle of hills at the far end of the valley toward Avignon.

The trees, whose thick canopy of leaves have offered short moments of release from the day’s heat, have themselves become an orchestra pit from whence the crickets and cigale perform their rhythmic evening songs.

The cicada’s song starts like a monastic chant, and casually intensifies into a bewitching Opera. At its peak, the sound can seem deafeningly loud and bewilderingly metered. As you walk off your meal you realize that the symphony is being repeated in every stand of trees you pass.

You become the tiniest of observers in the great antiphonal musical performance which takes place each summer night throughout southern France.

With that song still swirling in your ears, the sky goes dark, and the theatre curtain closes. The band keeps playing, but with diminishing enthusiasm, less vivace, but not yet decrescendo. With the ceremony of darkness underway, day bugs retire and night bugs report. Your mosquito bites from previous nights suddenly itch with a searing intensity. And you ready your soft flesh for more.