On Traveling as a Guest: Centro Infantil de los Angeles

This spring, I was offered the chance to venture to the small, yet distinct town of San Miguel de Allende in central Mexico. I am a daily news reader and often consider the harsh global headlines to be disheartening. In light of this, I welcomed the opportunity to be involved in something which did some real good for people in other parts of the world.

I wasn’t provided with many details before the trip, except that I would be accompanied by other like-minded Americans, and we would volunteer at Centro Infantil de los Angeles, a daycare for children of low-income families.

To be fair, I did conduct a significant amount of independent research on Centro Infantil to ensure I was putting myself in a safe situation. I spoke with a representative from Centro Infantil and reviewed the program’s Facebook page and website. I also confirmed the volunteer program’s legitimacy and reviewed several former volunteers’ testimonials on GoOverseas.com.

I’ve always lived in coastal cities, so the idea of traveling to Mexico and not visiting the beach seemed unnatural to me, but I was still intrigued.

San Miguel is a popular travel destination for American celebrities such as Meryl Streep, and it was crowned Travel & Leisure magazine’s “2017 World’s Best City.” Images online depicted San Miguel as an epicenter of fine arts and cuisine, with brightly painted buildings and historic cobblestone roads.

As I scrolled through the stunning photos, I found myself wondering where the lower class fit into this luxurious scene? 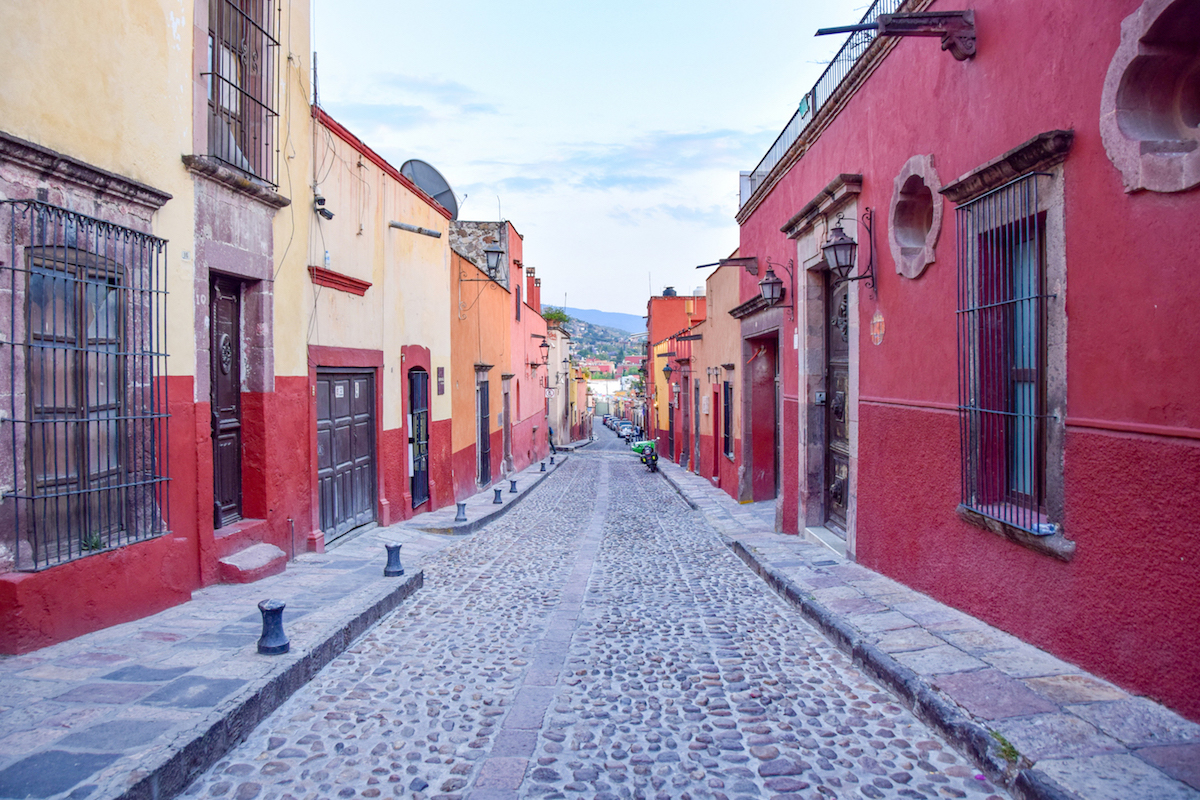 The drive from the closest airport to San Miguel was about an hour and a half long, and I spent it riding in a taxi van next to an American actor whose name and face I did not recognize.

Throughout the drive and amid waves of motion sickness, the gentleman relayed his longtime fondness for San Miguel and explained that he and his wife had bought a house here years ago. I asked him if he had been involved in philanthropic work in San Miguel or felt compelled to give back to the area. To my astonishment, he replied with a sigh and a piece of advice: “Don’t give your money to any of the homeless women begging on the street corners. They are gypsies running a scam.”

I wondered if his emotions stemmed from the first-hand experience of an attempted good deed gone wrong. Did his opinions mirror those of other expats in San Miguel? Looking back, I wish I would have mustered the courage to delve deeper into the conversation.

I could have explained to him how philanthropy can be approached in different ways, some safer than others. There are well-established philanthropic organizations all over the world and prior research is key to finding legitimate programs.

The taxi dropped me off at a red building on a steep road in an impoverished neighborhood. Michele, the 20-something American woman who worked as the full-time volunteer coordinator, greeted me and gave me a tour of the volunteer house, which was attached to the school and would be my home for the next three nights.

The afternoon was mine to explore the city with, as I was the first volunteer to arrive by several hours. On my 15-minute walk towards the city center, I passed young women holding small children. The roads were filled with potholes, and street dogs were rampant, but overall, I felt safe. 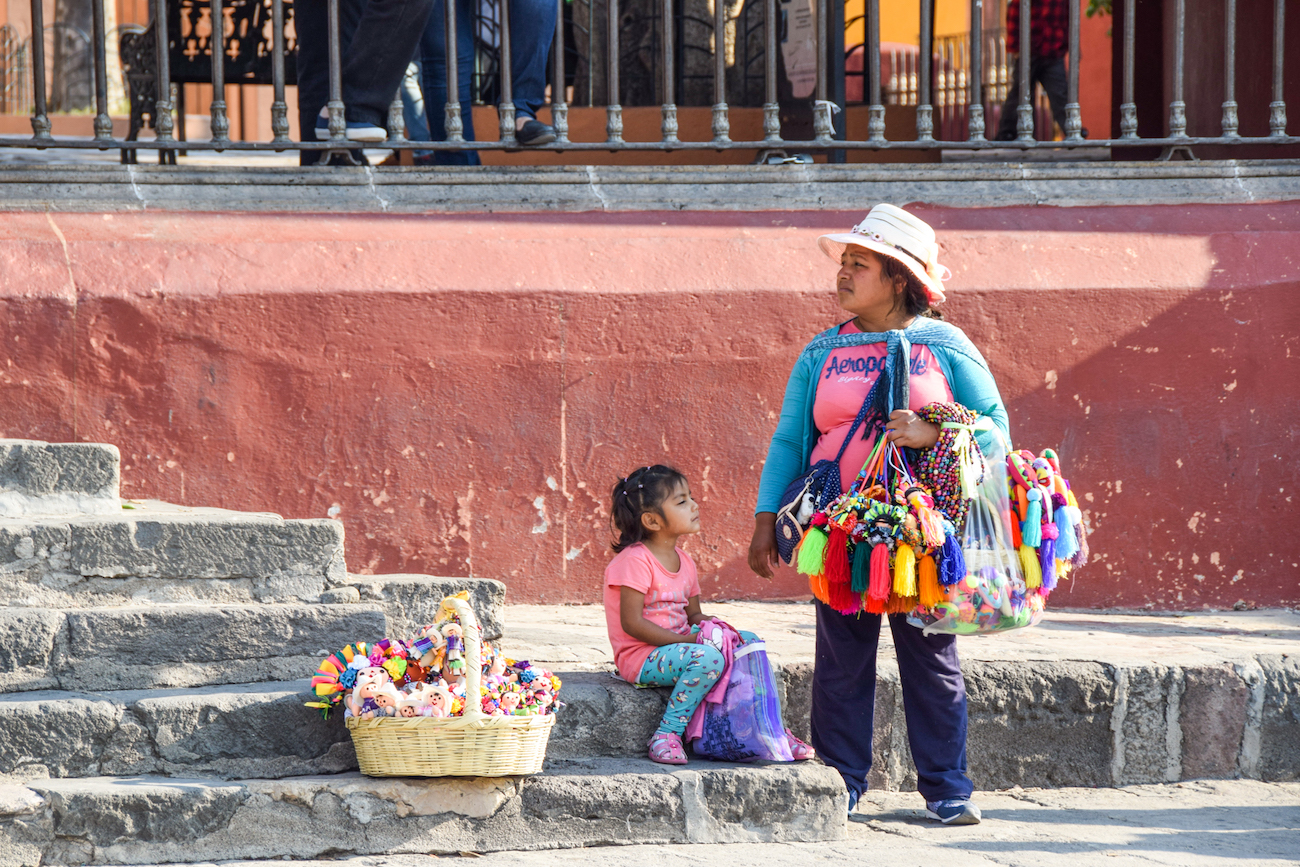 Once I reached the city center, I noticed it looked just as the online images depicted – colorful buildings, cobblestone roadways with no cars permitted, expensive boutiques, and rooftop bars. It was artsy but also felt Americanized. Everywhere I turned, I saw foreign men in fedoras locking fingers with women in linen pants and aviators.

There was even a Starbucks planted on the corner. Had any of these people had ever ventured further than a few streets from the center of the city?

The next morning began with a quick meet-and-greet with the other volunteers, followed by us receiving our classroom assignments. The other volunteers were of similar backgrounds and ages, but I learned that former volunteers included folks of varying backgrounds, nationalities, and ages. Centro Infantil had even hosted families who volunteered together in the past.

I was sent to the three-year-olds and instructed to support the teacher who spoke very little English. I was nervous because my experience with small children was limited, and my Spanish was rusty. The pre-trip information I gathered stated that daycare experience or Spanish language ability, although helpful, was not required for volunteers at San Miguel. Luckily for me, this held true. 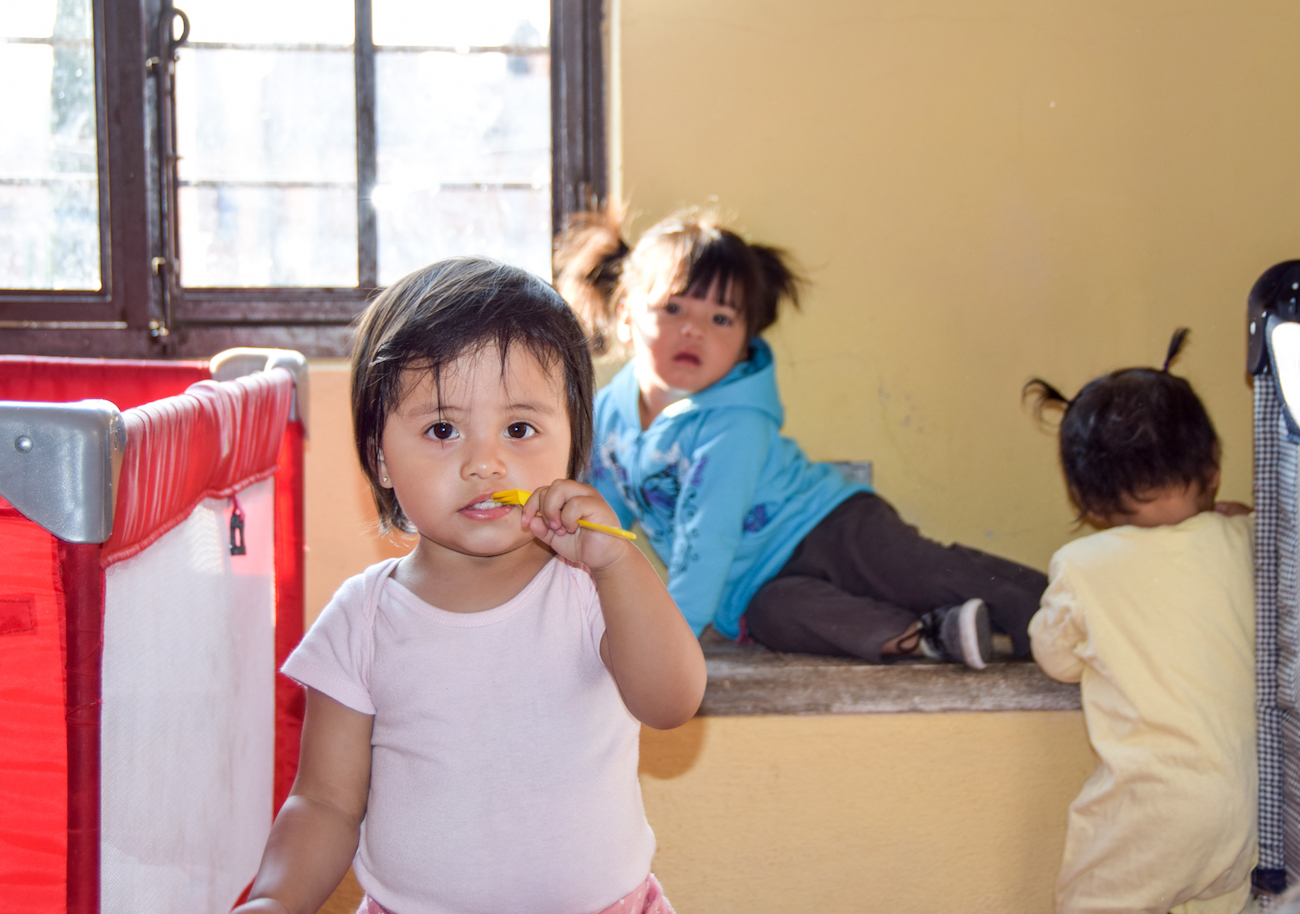 As we entered the roofless common area of the school, I admired the walls, covered in hand-painted murals of children and angels. The classroom was small, but each child had their own desk and plenty of toys. We began the day with breakfast, a soup-like cinnamon cereal mixture. Throughout the day, the teacher taught lessons and organized activities. It felt similar to the structure I remember from my preschool experience, with a few minor modifications. At Centro Infantil, the teachers also brush the kids’ teeth, clean their hair, and serve free meals provided by a non-profit called Feed the Hungry.

While I did not know their routine or language, the children were more than happy to lend me a hand – literally – there was at least one of them holding my hand every second of the day. We danced, played, and even jumped on a trampoline. They were oblivious to the holes in the trampoline and its eroding metal springs. They were just kids, purely acting like kids. They were content with that, and I was just trying to keep up with them. 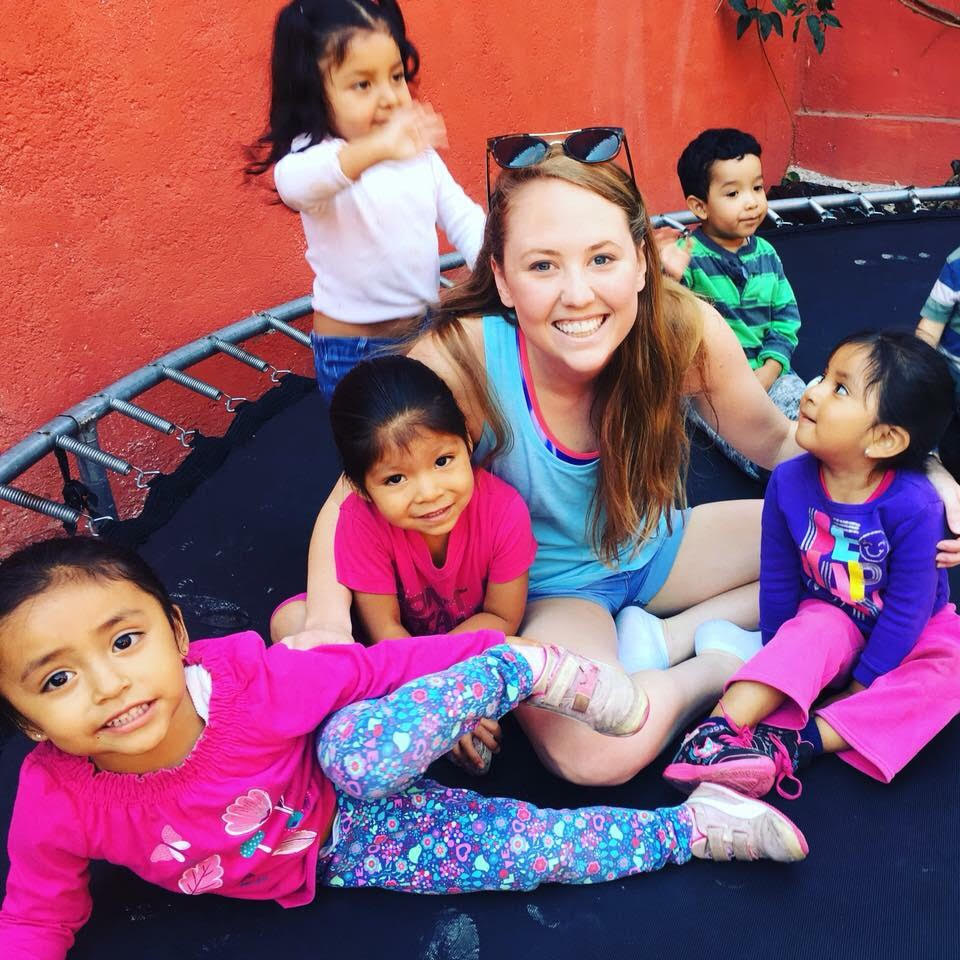 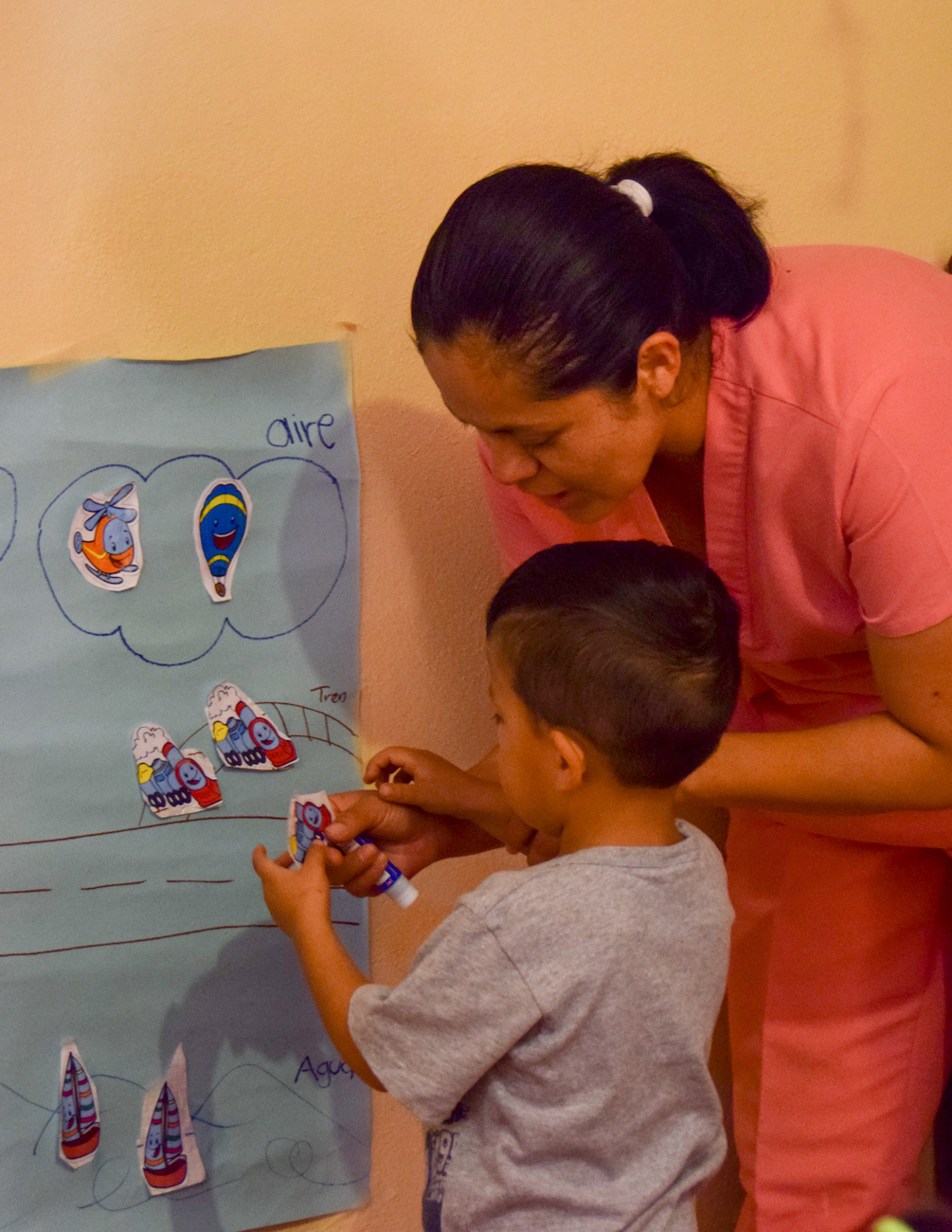 One child in my class, Jose, was from the orphanage and captured a special piece of my heart. Perhaps the reason Jose made such an impact on me was his unwavering positive attitude and the sweet nature he exhibited all day. Apart from wearing shoes that were collapsing at the toes, he looked just like the other kids. Jose was extra respectful of the teacher and clearly adored her as a mother-like figure.

Despite the low wages and long walks to Centro Infantil, the teachers were enormously passionate about their work.

They were appreciative of not only the job but also of the school’s overarching mission. Behind the scenes, other community members came together and supported the school as well. It felt like the neighborhood was its own eutopia; as if this whole other world existed which was hidden underneath the tourist-driven nature of the city. 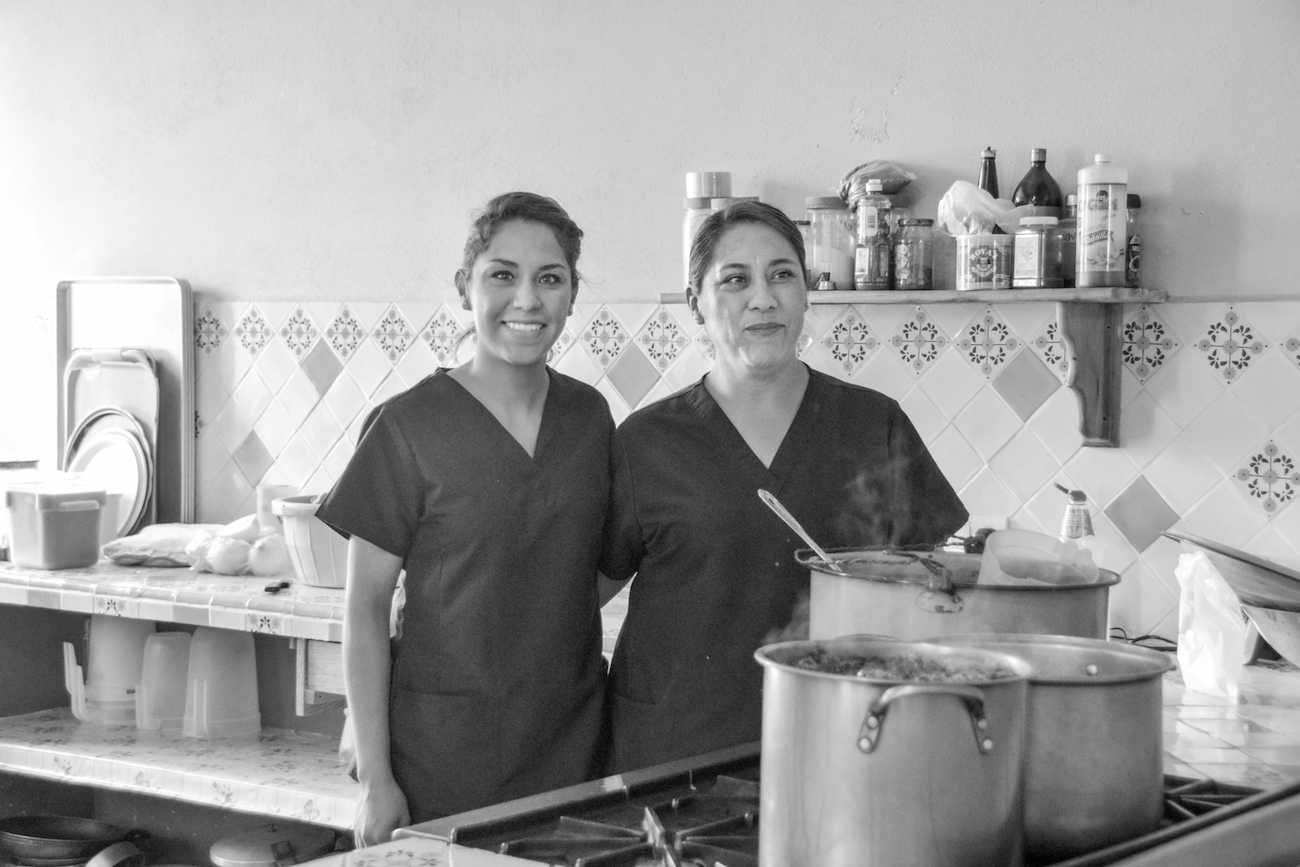 Later in the trip, I learned that although the school is tuition-free, there is a lengthy application process which includes a home check to ensure the parents prioritize their child’s well-being and education. Furthermore, one parent is required to work at least one hour per day at the school. This rule is strictly enforced; I witnessed 13-year-old moms cleaning floors and organizing school supplies. This system at Centro Infantil worked, and it did not require lawmakers or politicians to function correctly, just a community of people who genuinely cared. I often find myself pondering how a similar structure, as simple as it is, could benefit the United States.

My experience in San Miguel and Centro Infantil provided me with eye-opening interactions and fresh perspectives about community and philanthropy. While I admit that being around small children all day was exhausting at times, I enjoyed the opportunity.

True volunteerism isn’t always meant to be easy. If you really give it your all, you can get out of it as much as you give.

My trip also made me question what a community needs to thrive and what individuals require to be happy. I still find myself thinking about a parent-led play I was fortunate to witness on the second day of my trip. The play centered around acceptance and happiness, portrayed by a group of animals who accept an outcast frog into their community. The parents used household items to craft their animal character costumes. Their play didn’t require elaborate outfits or set backgrounds to get the message across, just positive attitudes and a group of parents who genuinely cared about their children. It inspired me to keep focusing on all the good in the world and realize happiness is attainable with the right attitude.

My days in San Miguel gave me a new outlook on travel.

I did meet some people from the States who were genuinely invested in the area, such as the woman who founded Centro Infantil and the two men who came to coach soccer at the orphanage. However, it appeared that many tourists were neither witnessing nor experiencing the authentic San Miguel. This has inspired me to approach travel as a guest in the future, rather than as a tourist. Traveling as a guest requires the recognition that you’re not in your own domain, and therefore, need to respect your host destination. As a guest, try to get to know the area and people through proactive exploration.

In popular vacation destinations and almost anywhere in the world, meaningful encounters can be experienced just off the beaten path and away from the cliché Instagram backdrops.

Wholeheartedly embracing the local communities can present unexpected opportunities to give back as you travel. So, next time you visit a popular destination, see what you can do make a real connection. Bonus points if it never makes it to Instagram.