The Ochre Valley of Sorrows

“I have always loved the desert. One sits down on a desert sand dune, sees nothing, hears nothing. Yet through the silence something throbs, and gleams…”

Have you ever been drenched by a desert rain? Tatacoa Desert is the place to find one, with its reddish arid expanse stretching from one wall of mountains to another, riddled with sudden drops and numerous cacti. 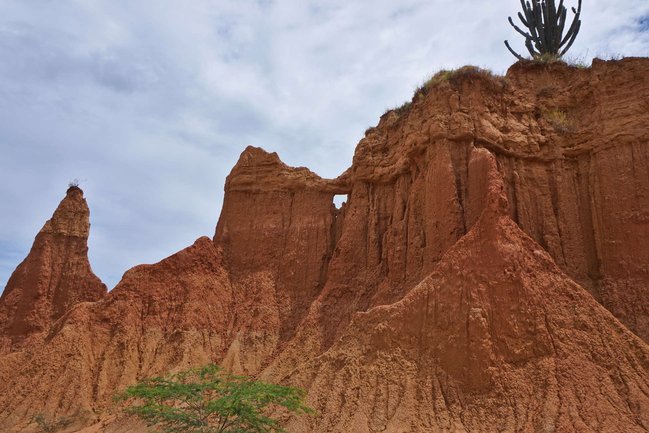 The Tatacoa Desert, or the “Valley of Sorrows” as it was called in XVI century by a Spanish conquistador, is a massive swath of arid land in the South of Colombia. Located between two Andes ridges, it is 330 square kilometers of incredible vistas and landscapes, also renowned for its fossils and clear night skies. It doesn’t look like the typical desert one tends to imagine – an endless sea of yellow dunes. Depending on the particular location, the dominant color of this place is either ochre or gray, always with a dash of green as it has plenty of plants, too. Despite being a desert, the Tatacoa has plenty of flora and fauna that will be of interest to a curious explorer willing to leave the beaten trail and tread the dusty silence alone.

An empty remote wasteland where eagles and vultures rule the sky, devoid of human pollution and far from the big city lights, the Tatacoa is a great place to observe the vastness of the Universe at night. There are multiple observatories, and at least one of them is free for everyone to visit and stargaze after the sundown. Be advised, however, that things may go south if the rain clouds come.

I usually imagine deserts as hot and parched fields of sand, but the Tatacoa is not as dry as it might seem. I even encountered a small pool of water while following a dry riverbed. Admittedly, it was shallow and muddy, but it was water. It’s hard to believe an information board at the entrance of the desert which says that the local precipitation is only 1.078 mm per year. Apparently, this is enough to support the many trees, bushes, and cacti that cover the eroded cavernous landscape of the desert. It’s not only plants that are thriving – numerous insects and animals are also present. I’ve encountered lizards, spiders, moths, butterflies, vultures, eagles and even goats out there in the wilderness. There’s also a chance to spot some snakes, scorpions, and turtles.

This place has no hotels. Besides the observatories, there are only a few private houses, hostels, and campsites. To spend a night there, it’s best to take a tent and other camping gear, along with water of course, as this is expensive to buy in the desert. Electricity is hard to come by as well, as it can only be generated locally. Internet connection is even rarer; a luxury, I’d say. A part of the serenity of the Tatacoa is being offline, tête-à-tête with nature and yourself. This experience is uncommon these days, and it might get boring real quick. It might even be disturbing to some.

I found the transportation here to be quite easy to manage – the closest settlement, called Villavieja, is about 6 km to the west. From there, people take mototaxis to bring them into the desert. The way out is to stop one of these mototaxis on the way back. I came to Villavieja from Neiva in a colectivo, a shared local transport. That’s one way to do it, and the drivers of the obviously overpriced mototaxis will try to convince you that it’s the only one. However, there is a more quick, cheap, and exciting way to get out; it includes taking a ferry from Villavieja across the troubled waters of the Magdalena river, to the city of Aipe. A short countryside hike from the coast and then the streets of Aipe will lead adventurous souls to a major highway going from Neiva to Bogotá.

If you’re a fan of either astronomy, archeology, nature, or just exotic off-the-grid places, the Tatacoa Desert is a place worth visiting at least once in your lifetime. Be sure to bring water, camping gear, sunscreen, a raincoat, and your favorite camera!