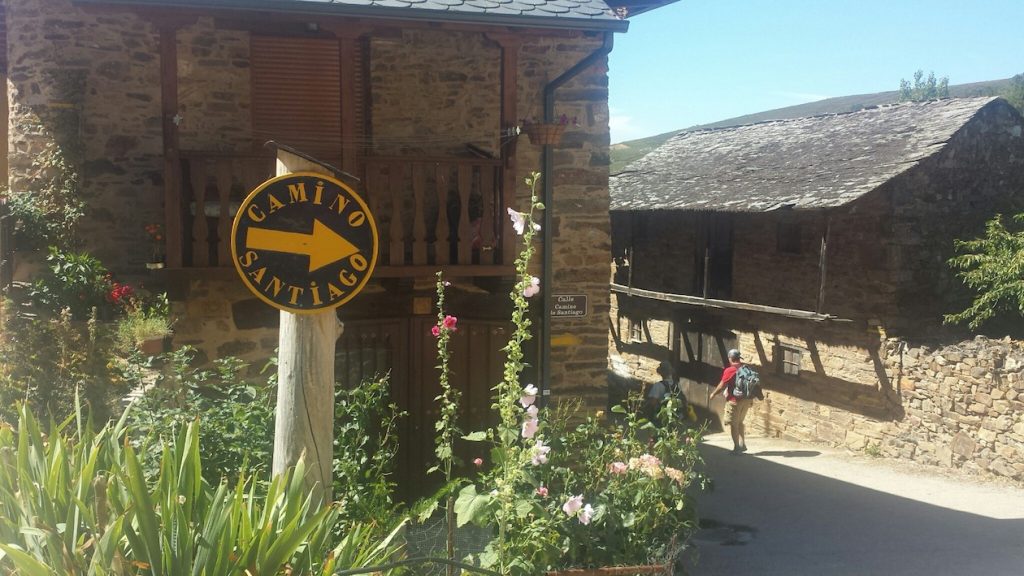 I first heard about the Camino de Santiago while studying abroad in Spain in 2006, but it wasn’t until nearly ten years later that I fulfilled my dream to walk the increasingly popular pilgrimage. I often have people asking me for advice on how to prepare, and what to bring – but this time, I’m going to talk about what you really don’t need for a 500-mile walk across northern Spain.

Even as I read item #1 back to myself, the detailed planner in me balks at the suggestion to take off on a 500-mile walk, in a foreign country, as a solo female traveler, without a plan. In the sixth months between deciding to go (because I bought the plane ticket) and walking through the doors of the albergue in St. Jean Pied-de-Port, France, I spent nearly every free moment preparing for the trip. I joined online forums, consulted friends who had already made the pilgrimage, read the guidebook at least five times, and even had a spreadsheet detailing where I would sleep every night for six weeks. The week before departure, I deleted that file. On purpose. I decided I needed to relinquish some control. I kept my reservations for the first two nights, and decided I would let each day after that surprise me. 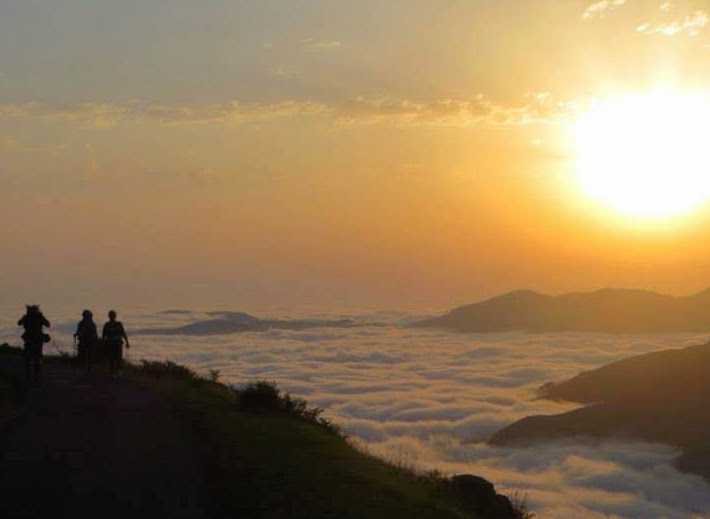 During those forty days of walking, I only made a reservation one more time, to stay with a group I had traveled with for a couple of days. It was a rainy day in Galicia, and on the way to my intended destination, some American hosts of an albergue called Fuente del Peregrino stopped me and offered a dry place to rest. After a few minutes, I continued on, feeling obligated to keep the plans I had already made with other pilgrims. I walked no more than 500 feet before I listened a feeling that I should stay where I was. I practically ran back to the albergue, claimed a bed, and called ahead to tell the group I would not be joining them. I don’t remember a single person from the group I left, but I am still in touch with the hosts of the albergue, a family from Texas. I even stayed with them on a trip to Dallas last year.

You don’t really need a plan on the Camino de Santiago – and if you have one, be willing to change it. 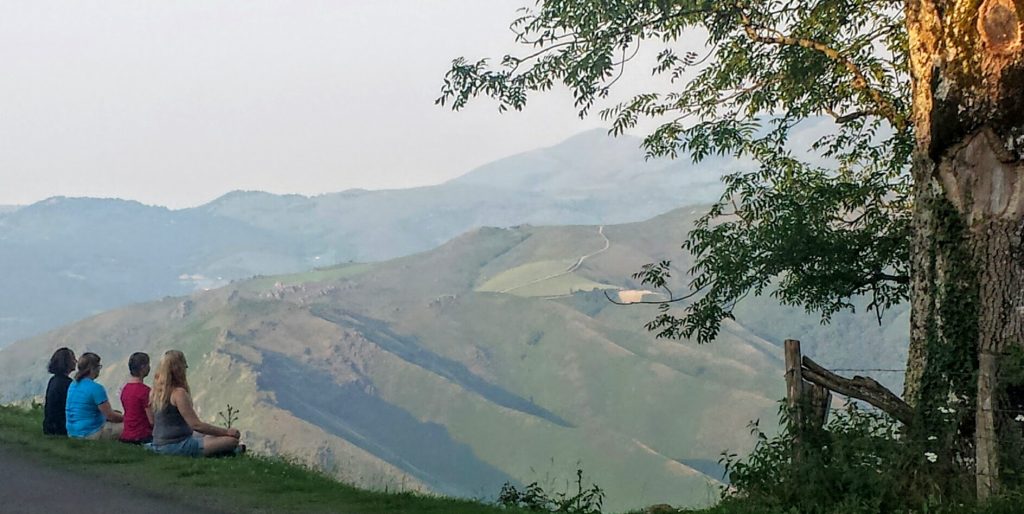 Small talk on the Camino de Santiago cuts straight to the intimate details. Within the first five minutes of meeting a fellow pilgrim, someone will ask, “why are you walking the Camino?” I have heard reasons ranging from grieving the loss of a loved one, to figuring out difficult life decisions, to, a teenager’s story of how he got caught drinking, so his parents put him on a flight to Spain a week later to spend the summer walking the Camino. People of all religions, and people with no religion, and people who hate religion, make this pilgrimage. 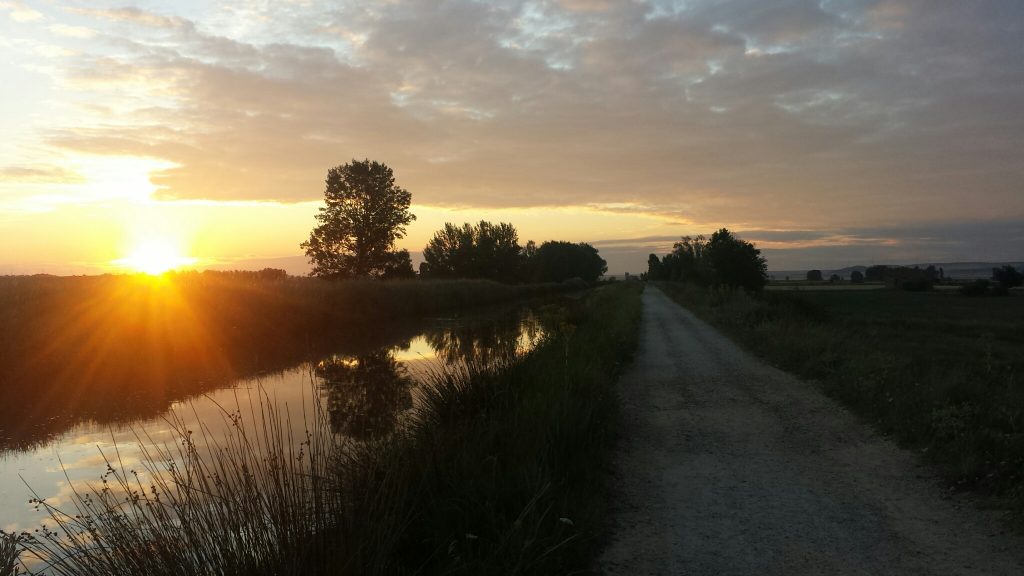 I am Catholic. I teach theology at a Catholic high school. And yet, I can’t say that I had any particular religious intention for walking the pilgrimage. I even had the audacity to admit that I was skeptical of the stories claiming the Apostle James was buried in Santiago de Compostela. In the first two weeks, I struggled with not having any interior sense of direction, until I decided to “be at peace in the not knowing.” I finally accepted that I didn’t need a “reason” to walk the Camino de Santiago. It didn’t really matter whether or not the road led to the bones of a saint. What mattered was that the journey would teach me what only I could learn – and that another pilgrim (like one who tried to convince me the only explanation for Pentecost was that the apostles were high on ‘shrooms) would receive the gifts best suited for him. 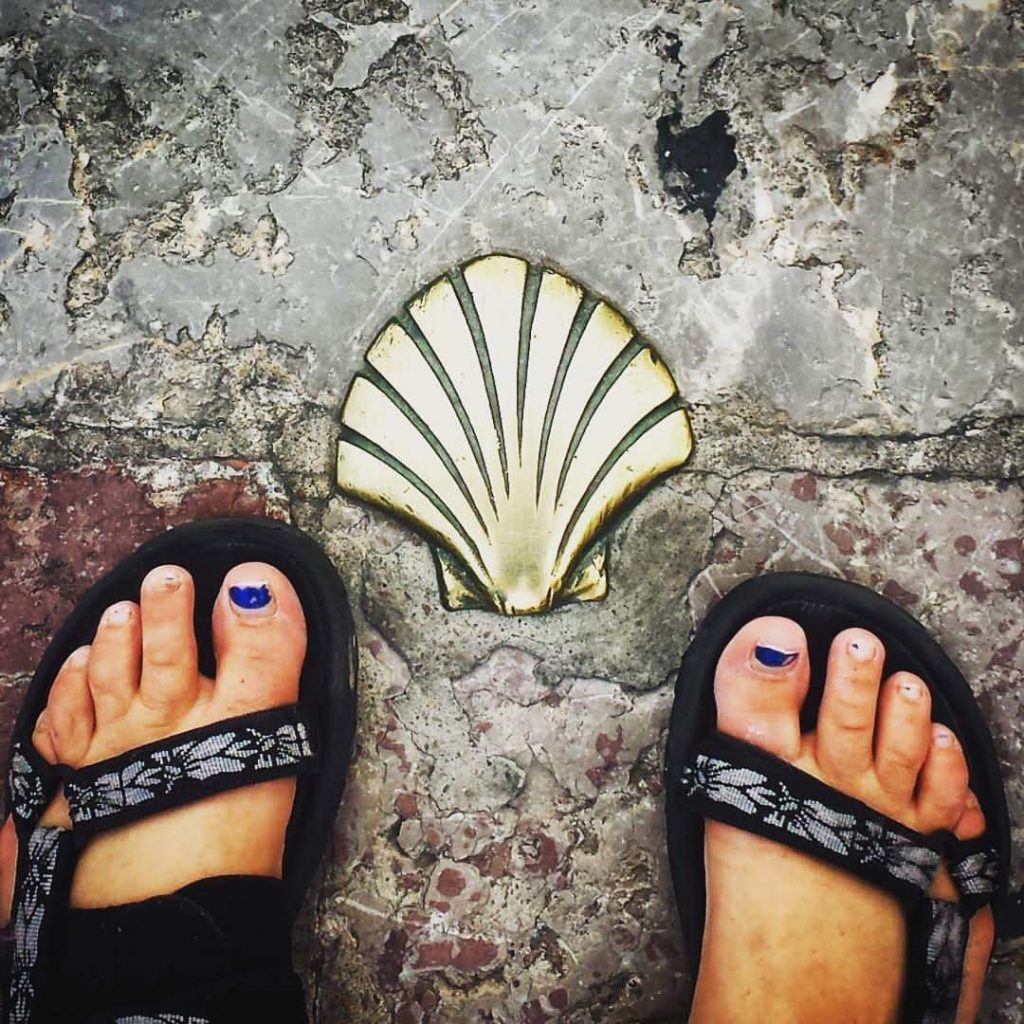 You don’t need a “reason” to walk the Camino de Santiago. Wanting to do it is enough – and each morning will give you a new reason to get up and keep walking.

I understand. Going alone to a foreign country where you will be living out of a backpack for a month and can’t even be sure where you will sleep each day is terrifying to most level-headed people.

Let yourself lose your balance. 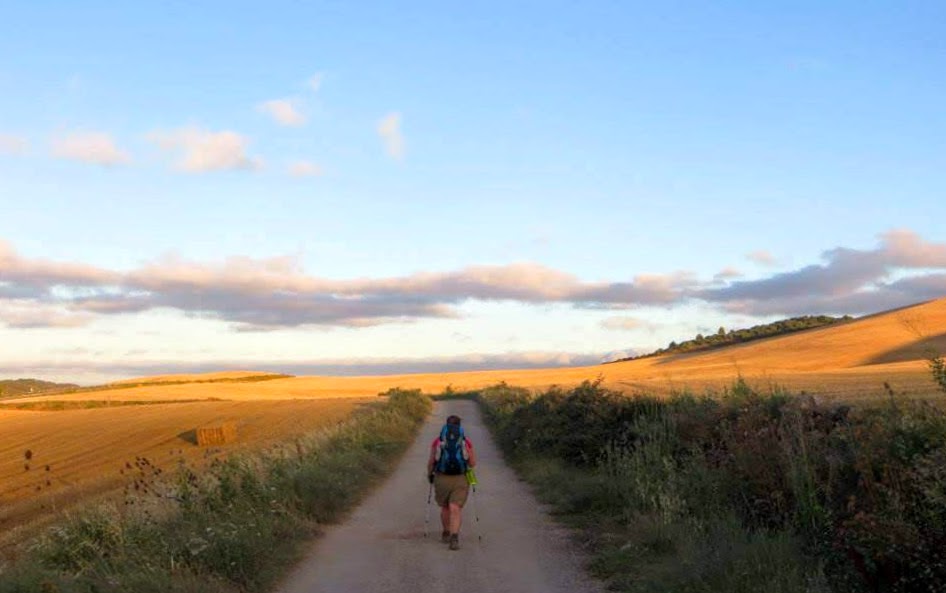 I didn’t intend to go alone, but, with few friends who had an entire summer free and the desire to spend that summer walking in shadeless Iberian heat, I decided I could either wait indefinitely or find a way to be okay with going on my own.

On the Camino de Santiago, though, you’re never really alone. There’s a social phenomenon most pilgrims refer to as the “Camino Family.” All pilgrims walking a given route begin to filter into groups walking at the same pace. You’ll stay in the same albergues, share meals, encourage each other during the day, and if you’re lucky, take over the back room of a neighborhood bar and close it down after hours of singing Irish drinking songs. 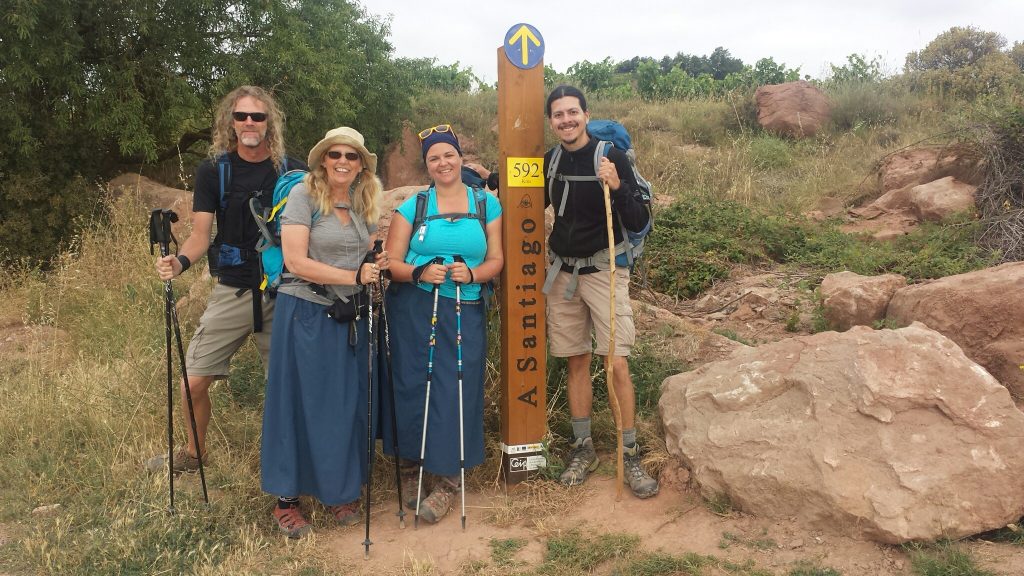 Not having a specific responsibility to any one traveling companion, I moved in and out of groups, creating connections I would never have been open to if I had to constantly coordinate plans with my walking partner. It also provided opportunities to spend significant portions of my day alone – which was helpful when my uninterrupted thoughts uncovered emotionally raw spots, leading to a lot of crying that I was happy no one else witnessed.

You don’t need to go with someone else. You’ll find them on the way – and you might finally find yourself. 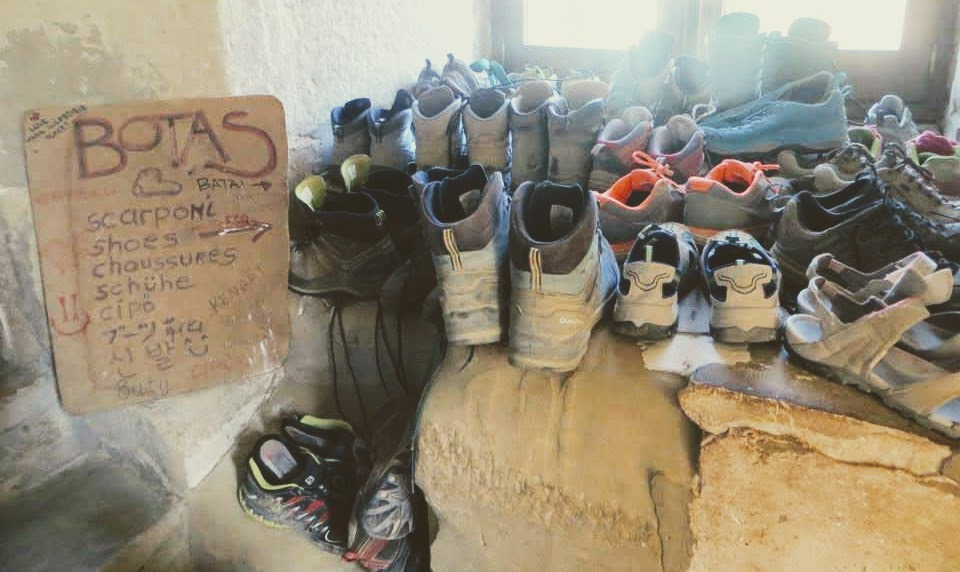 In two weeks, I am leaving for another long walk, called the Camino Ignaciano, which follows a 300-mile journey taken by St. Ignatius from Loyola to Manresa, Spain. I have done absolutely no training and my only plan is something resembling the thought that “If I fail, I’ll figure out something else to do in Europe for four weeks.” So, check back in a couple of months for a story about a lesser-known pilgrimage, or “How I Changed My Summer Plans Halfway Through a Solo Walk Across Spain.” It could go either way.