A quick espresso at the hotel in Lisbon fueled me for our short flight to Austria, but by the time we landed, I insisted that I needed a cappuccino before taking the train into the city. From the Vienna International Airport, it is only a short train ride (about 20 or 30 minutes) to the city center, and there are frequent departures directly from the airport.

“One cappuccino, please,” I said to the barista at the counter of a bustling restaurant in the airport’s food court. As I waited, other customers stepped forward to pick up their drinks.

I claimed the hot drink and returned to my daughter, Jayne. “Do they not call cappuccinos “cappuccinos” in Vienna?”

A Google search revealed that the Viennese very proudly (and tenaciously) refer to this drink as a “mélange.” So, I drank my mélange as we proceeded to the train. 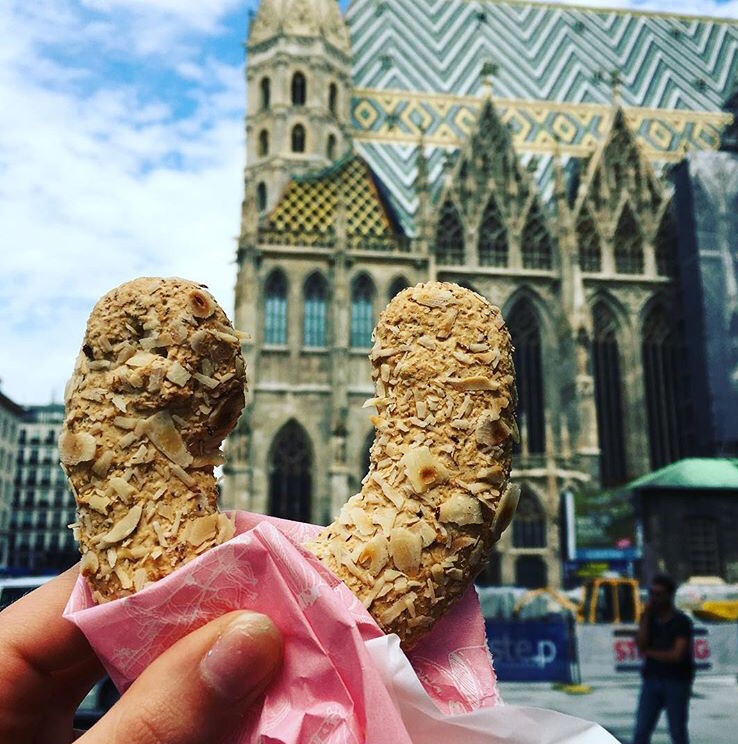 I had always wanted to visit Vienna.

I was excited as the train carried us to Stephensplatz. My only disappointment was that I had learned the Lipizzaner stallions were on vacation in July, and we would not be able to see a performance.

Arriving at Stephensplatz, we were impressed with the massive cathedral of St. Stephen, the parish church of Wolfgang Amadeus Mozart; it dwarfs every building around the square. I was eager to visit, but Jayne insisted we stop at Aida café. After she purchased a treat, we entered into the cool interior of the cathedral. 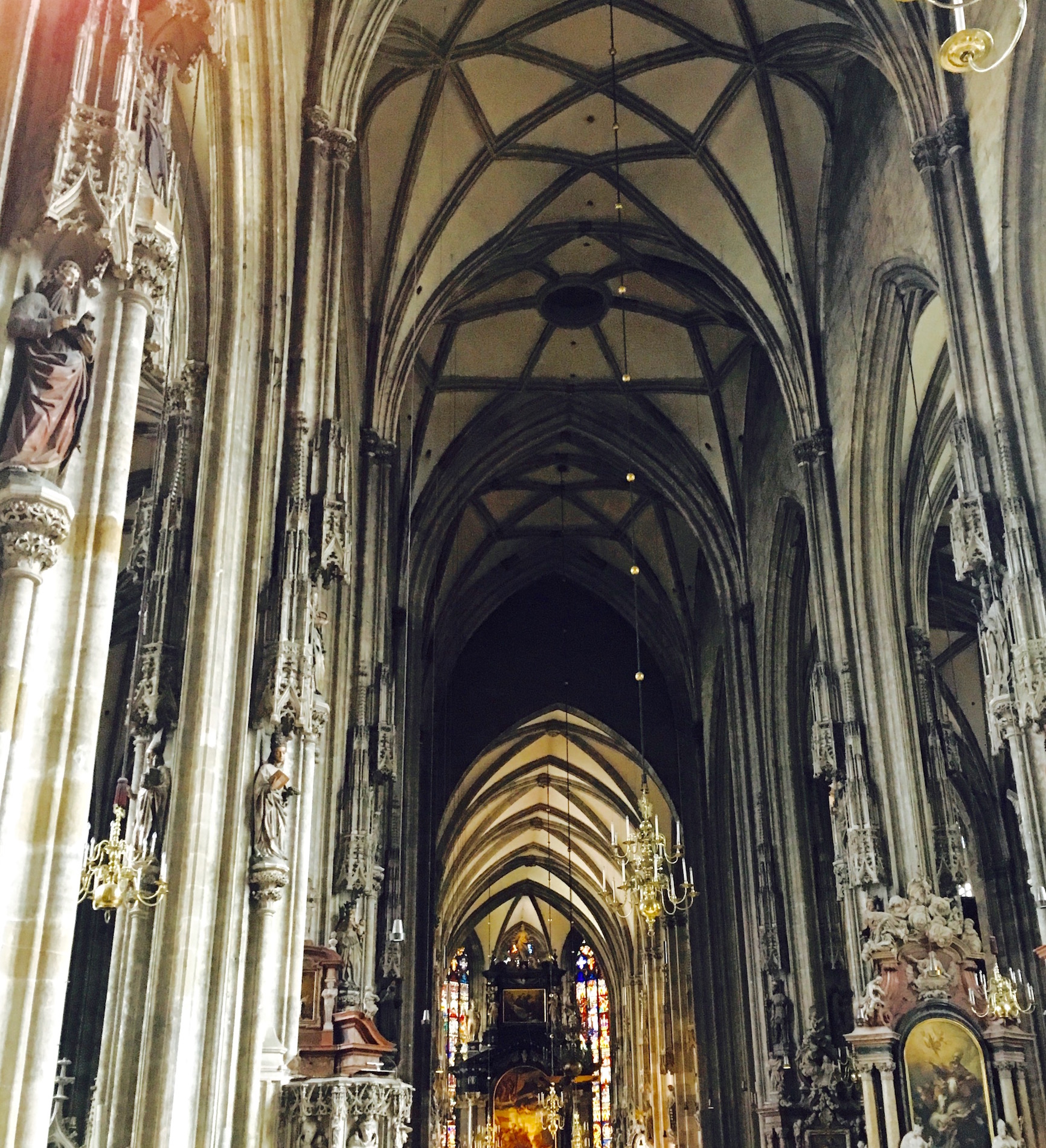 After stopping to pray before the Maria Pötsch icon and viewing the artwork in the cathedral, we went into the crypt. As the door closed behind us, I was thankful I’m not claustrophobic. The remains of a number of Habsburgs (but not the last emperor of Austria, Karl, and his wife, Zita) are interred there, as well as the bones of over ten thousand of Vienna’s dead.

After our tour, we headed up the Graben, past the Leopoldsbrunnen, a memorial statue and fountain of Leopold; and the Wiener Pestsäule, a statue of thanksgiving for deliverance from the plague. By the time we stumbled across a Starbucks, I needed a nap, so I curled up on a bench while my daughter sipped her drink and made use of the free wifi.

I awoke refreshed, and we set off to the Kunsthistorisches Museum. It was getting close to the 6:00 p.m. closing time, so we walked quickly until we reached the Museums Quartier. 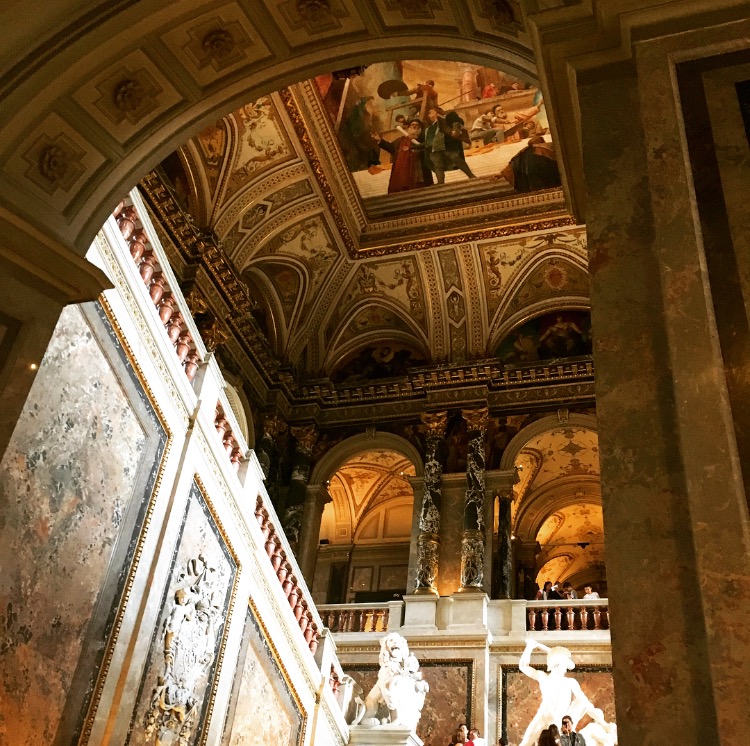 Outside of the Kunsthistorisches Museum is a life-size replica of the Saliera of Benvenuto Cellini, minus the figures of Neptune and Terra. While Jayne went to purchase our tickets, I watched as a family approached the interactive installation. The child climbed in, and the mother snapped photos.

“They don’t close for a quarter of an hour! Follow me,” I said.

I strode up the steps and through the front door of the Kunsthistorisches. A male guard looked the other way, allowing us to enter. I walked on, my daughter close behind, and we were soon in the Egyptian collection.

“We are going to get arrested!” my daughter hissed, terrified, as I viewed the works of art.

We took the elevator upstairs and continued our tour.

“Do you want to see the Saliera?” I asked.

Realizing it was time for the doors to close, we advanced toward the main staircase; it’s a grand marble structure with a statue of Theseus on the landing. The only thing between us and the outdoors was our decent and passage past the guards at the door. My daughter took the beeline approach, zipping down the gorgeous staircase and straight outside, without even taking a breath. I followed.

When the guard who had looked the other way upon our entrance looked me in the eye and winked, I was relieved. I’ll always be thankful for his kind act.

From the Kunsthistorisches Museum, we walked down the Burgring, and turned into Burggarten, enjoying the cooler air, and not having a goal in mind. Our overnight train did not depart until 10:00 p.m., and it was only just after six o’clock, so we had time to roam the…

Be still my heart. There, in the Burggarten, acting as if they owned the place, Lipizzaner mares and their foals were grazing. Dreams do come true!

I don’t know who moved faster, my daughter or I, as we hustled to get closer to the beautiful steeds. The young foals stayed cautiously near their mothers while the mares munched the grass. Tourists and visitors gathered all around to admire them, and too soon, the grooms were rounding them up. 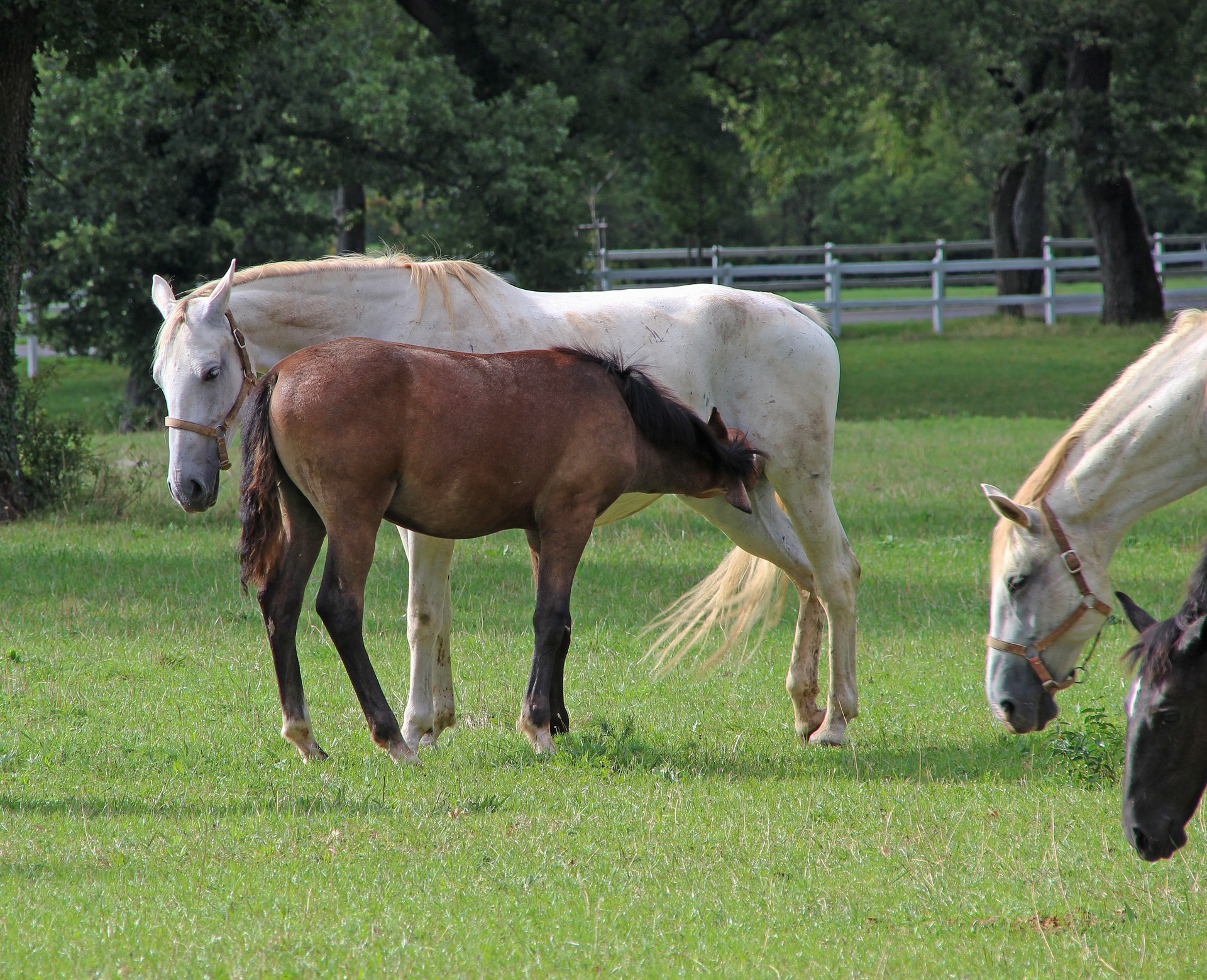 Photo by Scholie on Pixabay

I turned to follow the horse parade, confident that Jayne was right behind me.

The foals, for the most part, kept close to their mothers, but they were not in halters, so the grooms had to make sure all the horses and foals held together as they crossed Josefsplatz. One inquisitive foal checked out a water fountain before startling and rejoining the herd. Then they turned onto the street, crossed to the other side, and entered Stallburg, the stable area of the Spanish Riding School. A groom closed a gate so the fans would not enter, but they allowed us to watch as they took the horses to their stalls.

Amazed and thankful, I turned to Jayne to say, “Isn’t that great?” But she was not there.

Funny, she had been right next to me in the Burggarten, and she knew I was following the horses. I retraced my steps, but there was no sight of her. I pulled out my cell phone.

Returning to the Burggarten, I decided, was my best chance of finding her. I walked down Augustinerstraße, past a commemorative plaque to King Jan Sobieski, and rounded the corner back toward the park. At the very least, Jayne and I both knew we had to catch the 10:00 p.m. train, but spending my one evening in Vienna alone was not part of the original plan. 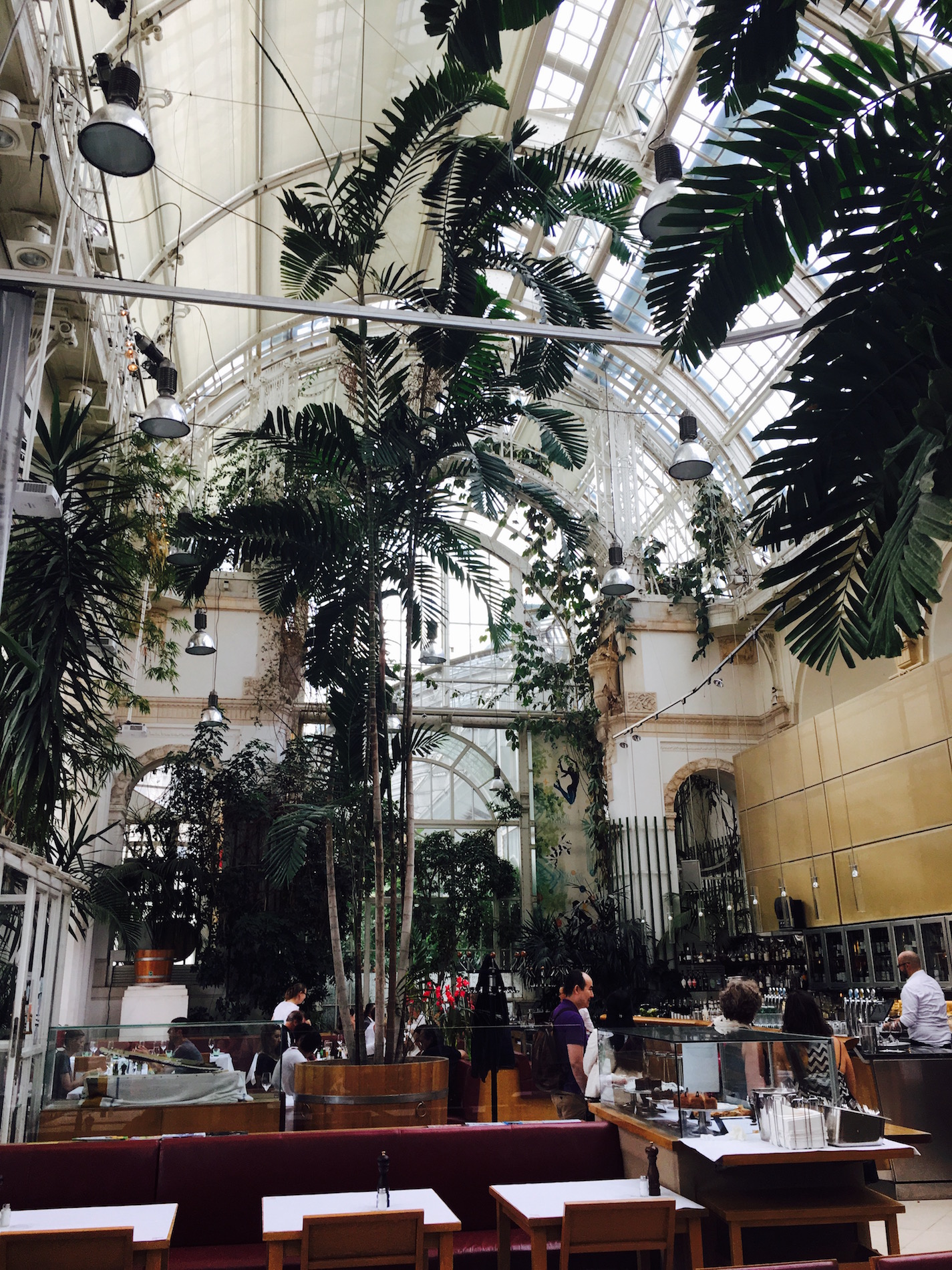 The Burggarten was mostly empty when I returned. I walked along the terrace before the Palmenhouse, a large greenhouse and cafe, realizing there are worse places to be lost.

I turned to see Jayne advancing toward me, not a bit pleased.

“You could’ve looked back,” she said.

We walked to the Vienna Opera house, peeking in at the door, telling each other that on our next visit, we’d catch a performance at both the Spanish Riding School and the opera house. Then we crossed Philharmoniker Straße and took a seat at Café Mozart. 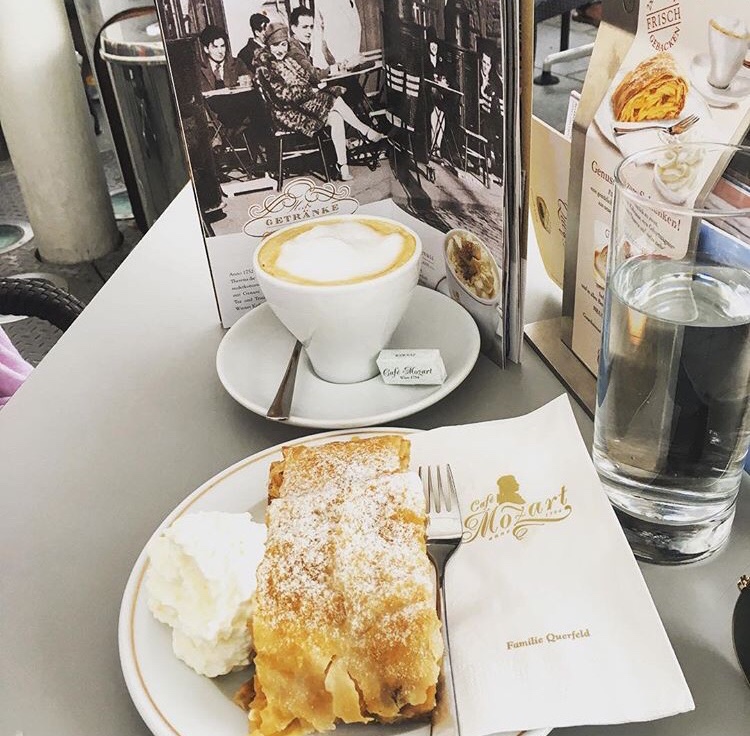 “May I please have a mélange?” I asked the waiter.

After a few quiet moments of people watching, I said to Jayne, “I’m glad you made me come on this trip.”

“You’re welcome,” she said, taking the first bite of her apfelstrudel.