Everything You Think You Know About Travel Writers is Wrong 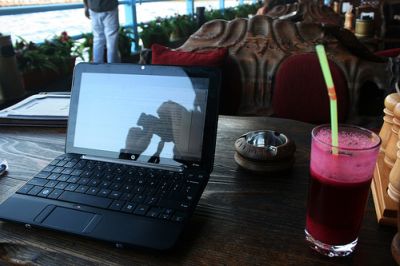 On “Everything You Think is Wrong Day” this year (which falls on the same day as National Pears Helene Day, in case you were wondering – seriously, who comes up with these “holidays,” anyway?), we thought we’d take a moment to go over some of the most commonly held beliefs about travel writers – and then tell you why those beliefs are wrong.
So, yeah. This is kind of an “everything you think you know about travel writers is wrong” sort of thing. Unless you’re a travel writer, in which case you probably already know all this stuff. In that case, feel free to send it to any family or friends who pester you with their uneducated ways.

Some travel writers are gregarious, but the number of introverted travel writers would likely shock the unassuming public at large. It makes perfect sense from inside this snow globe, of course – travel writers are observers, and observers don’t have to interact with what/who they’re observing. It is, in some ways, an ideal job for someone who isn’t comfortable talking to strangers. Of course, the best travel writers learn to overcome at least some of their introverted tendencies in order to get those delightful human interest stories readers always love, but they’re often well outside their comfort zone in those situations.

Travel writers are born writers who don’t have to work at it.

Are some people better natural writers than others? Sure, there’s an argument to be made for that. But writing, like any other skill, is learned – and anyone can learn to be better at whatever they do. Travel writers aren’t all English majors or aspiring novelists, and the best writers usually like it when they get constructive feedback from editors and readers. Why? Because travel writers are self-flagellating masochists? No, silly – because good travel writers want to become great travel writers.

This is one of those popular myths that remains popular regardless of how many times it’s exposed as a myth, but for some reason it lives on. In some ways, travel writers are to blame for this myth, because when anyone asks us about our jobs we’re usually keen to recount all the enviable aspects while leaving out the ugly details. Which is possibly just another way of saying travel writers are good liars, but that statement’s harder to dispute – so we’ll just leave that one alone.

Travel writers just write about what happens to them.

This can be otherwise expressed by the following simple mathematical equation:
Travel writing ≠ journaling
Carry on, please.
Further reading:

Travel writers may complain sometimes, but they wouldn’t have it any other way.

Anyone who’s ever talked to a travel writer who’s on a myth-dispelling mission knows that they can make it sound like travel writing could very well be the Worst Job Ever. Jump into that discussion with a bona fide offer for a desk job in some office cubicle, however, and said travel writer is bound to back pedal pretty quickly. It’s true that travel writers can be great complainers – and it’s also true that even if there are things about our jobs that are worth complaining about, most of us still wouldn’t take that desk job. It’s not easy, it’s not glamorous, and it’s not all about you, but there’s plenty to love about travel writing.
If you’re interested in learning more about travel writing, and especially how to get started, you could do much worse than to pick up a copy of Tim Leffel’s book “Travel Writing 2.0.”

Here’s what the Travel Blog Mob had to say about Everything You Think Is Wrong: